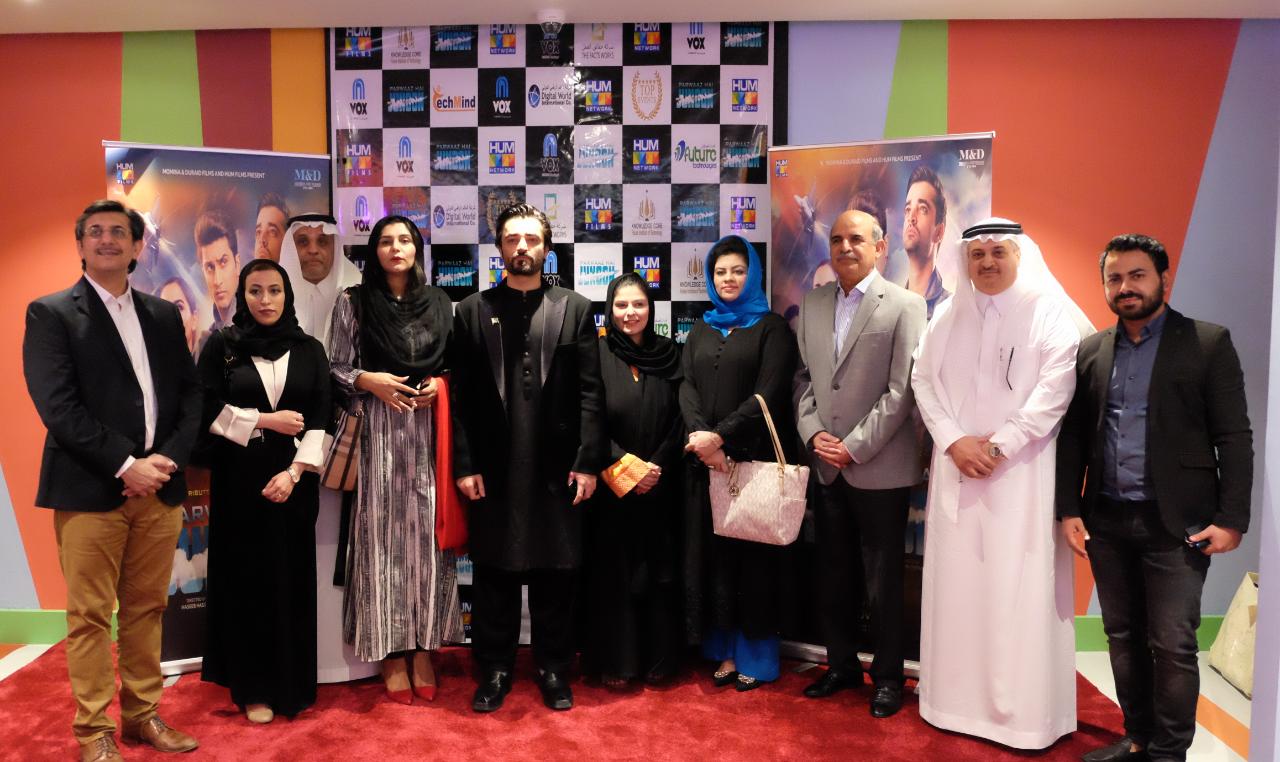 Pakistani blockbuster movie "Parwaaz Hai Junnon" aka PHJ produced by HUM films becomes the first ever Pakistani movie officially released in Saudi Cinemas following the decision in last December 2017 by the Saudi Government to reopen cinemas in the Kingdom.

Speaking on the occasion Saudi Advisor of Ministry of Information Faheem Hamid Al Hamid has said, "Today are very historic moments of Pak Saudi cultural relations, we will continue our support to promote Pakistani films in Saudi Arabia", he said.

Saudi Envoy to Pakistan Nawaf Al Maliki remarked the brotherly relations of both of the countries, "Saudi Arabia & Pakistan are one of the important countries of the world and are well known for their cultural diversities. We will strengthen our peoples to peoples contact by promoting our cultures", he mentioned.

The film producer of "Parwaaz Hai Junoon" Duraid Qureshi briefed the audience about the movie, "PHJ is the first ever commercial movie produced about the Pakistan Air Force. We tried our best to convey through our movie  about the professionalism and the bravery of Pakistan Air force protecting our homeland", he said. Duraid praised the efforts of Knowledge Core, Top Events, Pakistani and Saudi Ministries and Embassies in promotion of Pakistani films especially the PHJ. He highly praised the vision of the Custodian of the two holy mosques King Salman bin Abdulaziz and the Crown Prince Muhammad bin Salman for allowing the Pakistani movies to screened in Saudi Arabia. Duraid also paid his thanks to the audience and the Pakistani community in Saudi Arabia for their fruitful response to "Parwaaz Hai Junoon".

PHJ's Hero Hamza Ali Abbasi appeared to be happy and was so glad upon the launching of his film in Saudi Arabia, "Saudi Arabia is very close to my heart and I feel so happy to be here on the premiere of my film and I wish to see more Pakistani movies on the Saudi Cinema's screens", Hamza said.

PHJ's Heroine Hania Amir was overwhelmed by the great Saudi hospitality, "I am truly happy to be here in Saudi Arabia on the premiere of our movie "Parwaaz Hai Junoon", the red carpet reception at the VOX cinema is beyond my expectation and the response by the audience was so great", she said.

Director Knowledge Core Amir Shahzad reaffirmed his committment to promote Pakistani culture in Saudi Arabia. Pakistani Parlimanterians Javaria Zafar Aheer and Komal Shahzaib described it as a new era in Pak-Saudi relations that can bring more and positive opportunities for both of the countries.

After the successful screening of the movie, various Pakistani community representatives highly praised the standard and the quality of the movie.

They rejoiced with the presence of the mega stars and the high ranking government officials.