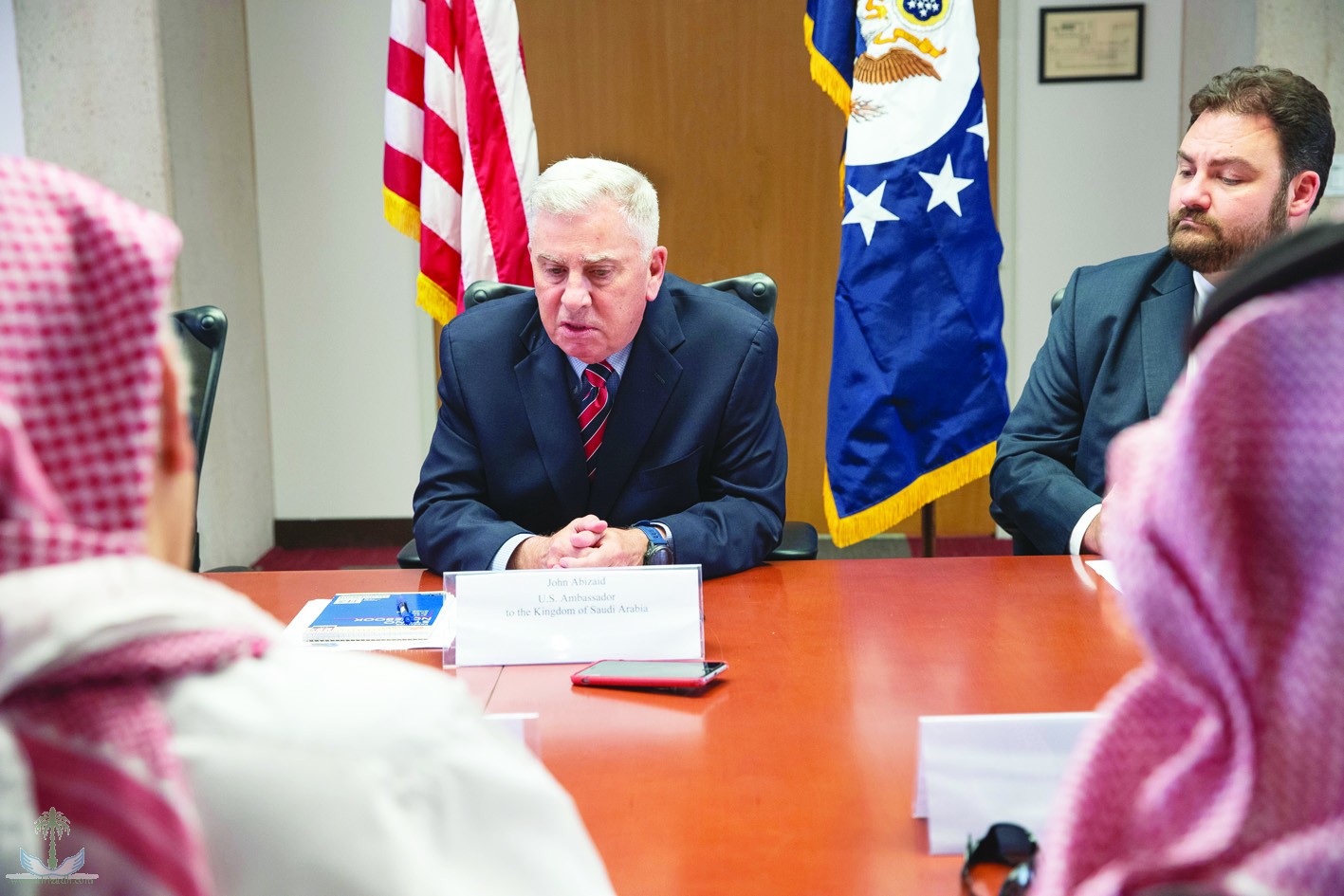 Ambassador AbiZaid: Saudi-US relations are the most important relations in the world

"The relationship between the United States and Saudi Arabia is one of the most important relations in the world," US Ambassador to the Kingdom, John Abizaid, said at the outset of his first press interview with the local press yesterday. "I'm grateful to Secretary of State and the President for giving me the opportunity to serve as an ambassador to the Kingdom.

Ambassador Abizaid said: "As an ambassador to my country here, I am committed to long-term strategic relationships and contributing to finding solutions to problems on a mutual basis.

I am sure that we are facing the same problems. I would like to inform you that one of the reasons for asking to come here is the reform program launched by the Crown Prince. This program launched by the Kingdom will undoubtedly reshape the region. It is a bold attempt to reshape society and diversify the economy. In the past, our relationship was mainly based on oil, but in the future our relationship would be based on creative ideas for thinking about the future, thinking about institutions and thinking about moderation. I feel optimistic about moderation pursued by the Kingdom of Saudi Arabia in the region, one of the most important aspects of the eradication of terrorism and extremism. You know that I spent most of my life as a soldier I do not want my children to suffer, I am committed to peace.

I feel optimistic about moderation pursued by the Kingdom of Saudi Arabia in the region, one of the most important aspects of the eradication of terrorism and extremism.

I want to work with you to reach peaceful path, providing neighbors of the Kingdom with help to find these peaceful paths, hopefully they would succeed. I know that I do not speak Arabic fluently, but I hope that with your help in six months, we can have this in Arabic." He said that his wife has been with him, "and we live together in that house that belongs to the US government. It's the biggest house I've ever lived in", he added.

Turning to the US interest in Vision 2030, how can this happen?

Abizaid said: "I have seen Vision 2030 and I'm certain that reforms are not easy. It is easy to talk about reforms, but it is difficult to make reforms and bring about change in society. It requires a lot of difficult things. Before I came here. I served as  a high-level adviser to the Ukrainian armed forces and helped them in their struggle to achieve stability. It was long slow process. Sometimes we took three steps forward and sometimes we took three step backward. But, they succeeded and were able to carry out the reforms. I know that reforms may frighten people, however, it is the only way. On the other hand, when people see the fruits of those reforms and the fruits of economic diversification, which is a matter of great priority, it will encourage them to move forward on that path."

He added: "I have seen change over the past five years, and it is really remarkable. I think the Saudi youth do great job and have great opportunities for a better life for their families. I is really remarkable and I see a lot of changes within the government and its institutions, and you've already achieved it. It's really hard work as people were used to a certain way of life in the past and now they will have to take a another different way to achieve progress. "I want the US to be a partner to the Saudi friend in terms of these reforms, not only by existing in the oil business but also in the restructuring of institutions. Our expertise can be used to help you think differently about the future. We can provide you with ideas. We do not seek solutions, but the experience and creativity of US companies will put you at the forefront of change. If we can find ways to enable that partnership, we can move forward together in this way. Of course other countries want to take advantage of US institutions that have unique technology, capabilities and organizational skills, which is defined by our skills in organizing things, and I think you will be able to change the lives of your children and grandchildren. Once again, I hope that the US will be the key partner to Saudi Arabia and you are the ones who have the right to take this decision, but I really want that to happen more than you can imagine. I'm not here to criticize, but for partnership." I want the US to be a partner to the Saudi friend in terms of these reforms.

On the recent pressures on Iran, will they change its position?

Ambassador Abizaid said: "When the revolution broke out in Iran, I was at a very young age and I was in Jordan. I remember the great impact on the region, which was very negative and I think it is time now for the Iranian people to think about a better future. They need Vision 2030 and need a path that will lead them to the future. This will not be achieved with the presence of the IRGC and will not be achieved with the presence of the mullahs' regime, but it will be achieved through the Iranian people's willingness to have a better future. Moderation frightens and worries them about the sustainability of the revolution. The Houthis cannot launch rockets into Yemen without the help of Iran. We are aware that they have received assistance and advice from Iran and are aware of their inability to launch attacks on Saudi Arabia without the guidance of Iran.

The appointment of a Saudi ambassadress in Washington

Concerning his impression on the appointment of a Saudi woman as the first ambassador to Saudi Arabia in the United States, US ambassador said: ""I find it a great and wonderful step taken by Saudi Arabia and it is the beginning for launching more steps in many other places. The Saudi Ambassador to the United States has very impressive qualities. She is smart, informed and I wish her all the best. It is a positive step that indicates that the Kingdom is moving forward towards the realization of Vision of 2030.

it is time now for the Iranian people to think about a better future. They need Vision 2030 and need a path that will lead them to the future.

Iran is a threat

Answering a question about the explosions that took place in the oil tankers in the Gulf and the steps that will be taken in turn, the US Ambassador said: "It is worth first of all to conduct a thorough investigation to understand what happened. We know for sure that ships were destroyed and seek to know the source responsible for this incident. As a diplomat, I must read the report. I think the Iranians are a big threat. I hope the IRGC aircraft will not continue to threaten Iraq, Lebanon, Syria and Yemen, and we should not be surprised if we find this threat in other areas."

He stressed that it is not in the interest of the United States and Saudi Arabia to engage in conflicts, but he felt sorry about the action taken upon his arrival.

I look forward to working seriously on the issues covered by Vision 2030.

For the most important files that he will give priority while serving as the US Ambassador to the Kingdom, he said: The issues that both your government and my government are working to reach an understanding on the occurrence and why they happened and come out with reasonable responses."

As for the open issues in the region; Yemen, Syria, Iraq, Lebanon and Iran, what do you think of these issues? Do you think they will close in the near future or will they take time?

"There is a lot going on in the region, and unfortunately having a an impact on Saudi Arabia in particular, but if the Iranian regime corrected its behavior and reformed its approach, I think it will be possible to reach solutions to these outstanding issues. The main reason for the outbreak of such crises in the region is the sectarian problems that are behind everyone. We need to organize ourselves so that we can achieve solidarity and synergy. This will not happen quickly, but let us look at the positive aspect of ending most of the crises in the region in which Saudi Arabia has played an important role. Sometimes I ask myself what more can be achieved. We have many opportunities for peace and prosperity for the region and for the world as a whole. No one denies the bad situation in Syria and Kurdistan, but I believe that the people of the region are doing their best to strive to improve these conditions, especially in light of the assistance and contributions provided by Saudi Arabia.

What priorities should our Kingdom fulfill?

The first priority is to bring relations to the level that enables to achieve Vision 2030 and allow us to play the role necessary to help your leadership achieve what it seeks through that vision. The second priority is to ensure security for the region as a whole, not by deploying troops and engaging in wars, but by allowing peoples to defend themselves. The US military support is aimed at helping the peoples of the region achieve their security rather than having troops on the ground for domination. We are in a transitional phase in which the armed forces can become more independent. On the commercial level, we are looking for more opportunities outside the framework of Vision 2030 for mutual benefit to everyone through joint ventures. The third priority is to promote student exchange, which has undoubtedly led to major change in the region. It is important.