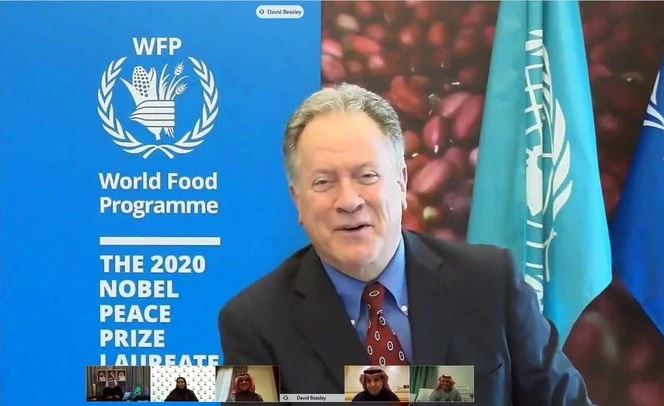 Executive Director of the World Food Programme (WFP) David Beasley has expressed his sincere thanks to the Kingdom of Saudi Arabia for providing effective food-security support, through King Salman Humanitarian Aid and Relief Centre (KSrelief) to help the most vulnerable of people in Yemen. The Executive Director stated that the Kingdom’s assistance through KSrelief will undoubtedly help in averting hunger to at least 2.2 million people in Yemen.
Executive Director Beasley’s statement was made during the signing of a Joint Cooperation Agreement between KSrelief and WFP on 23 February 2021, to improve food security for the most vulnerable families in some Yemeni regions, with a cost of USD 40 million.
In a press statement, the WFP Executive Director expressed his appreciation to KSrelief for the invaluable and strategic partnership. He added that there is still a lot of work to do in coming months, however, the support given by KSA through KSrelief is a tremendous boost to efforts directed to supporting the people of Yemen. He also added, “This support here will really make a difference because COVID-19 has dynamically impacted an already vulnerable population, as well as what we know has exacerbated hunger all over the world. Yemen is one of the most difficult places on the earth”.