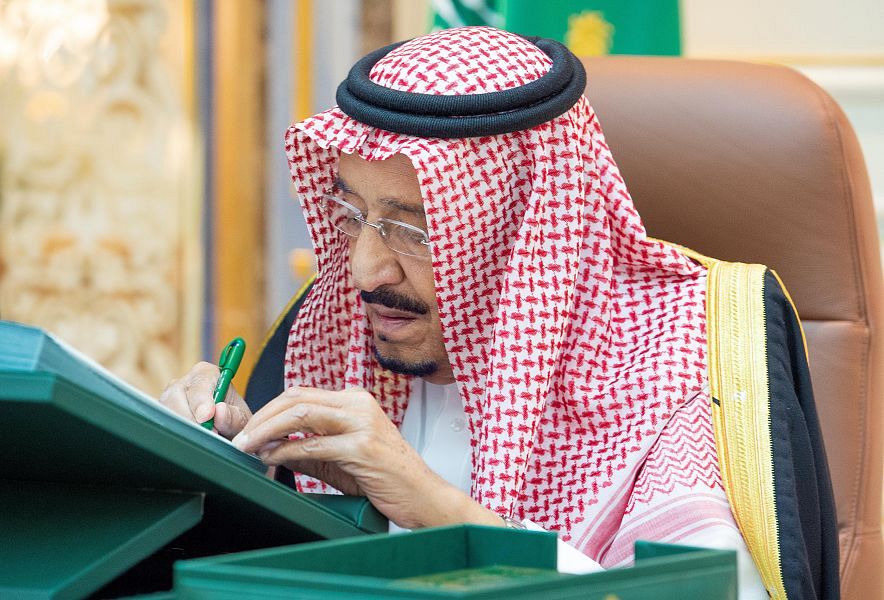 At the outset of the session, the Custodian of the Two Holy Mosques thanked and praised Allah Almighty for the health and well-being he is enjoying following the tests he underwent as a result of inflammation of the gallbladder, expressing his appreciation to everyone who asked about him to reassure of his health.

Thereafter, the Cabinet followed the preparations of arrangements of the relevant government agencies taking part in Hajj’s activities to implement security, preventive, organizational and service plans, in accordance with a high-level integrated work system aimed at enabling pilgrims to easily perform the ritual in a safe healthy manner in line with the best level of services and facilities as well as the highest standards for maintaining their safety from the implications and impacts of the novel Coronavirus (COVID-19) pandemic and ways to protect them.

In a statement to Saudi Press Agency, Acting Minister of Media Dr. Majid bin Abdullah Al-Qasabi stated that the cabinet reviewed a number of reports related to the Coronavirus pandemic and its developments at the preventive and therapeutic levels. The Cabinet also reviewed the latest statistics of cases recorded in the Kingdom as well as the health care provided to them in light of the stability of critical cases and infections in addition to the increase of the recovered cases, affirming the importance of continuing to monitor and follow-up all developments and expand the tests in various regions via the specialized laboratories in line with the highest quality.

The Cabinet reviewed the outcomes of the third session of the Saudi-Iraqi Coordination Council in Riyadh, which resulted in exploring opportunities for cooperation in all fields, developing strategic partnership, opening new horizons of cooperation in the economic and development fields, deepening them at the international and regional affairs, and protecting the common interests, which came as an extension of efforts to strengthen relations between the Kingdom of Saudi Arabia and the Republic of Iraq in order to serve the aspirations of the governments and peoples of the two brotherly countries.

The cabinet pointed out the progress made by the Kingdom in the global ranking of the index of digital infrastructure for communications and information technology issued by the United Nations to measure the development of e-government by achieving the 27th position globally and the 8th among the countries of the Group of Twenty, affirming that this achievement reflects the efforts of a number of government sectors that participate in building a new present worthy of the Kingdom's status and its aspirations to be a global pioneering in light of the Kingdom Vision 2030.

Dr. Majid Al-Qasabi indicated that the cabinet considered the Kingdom’s declaration, in cooperation with Terrorist Financing Targeting Center (TFTC)'s six members, of designating six targets provide facilitation and financial support to the (ISIL), as a further targeting to disrupt terrorist organizations’ funds and undermine their ability to conceal activities and finance their operations as well as to share financial intelligence information and build the capacity of member states to target activities that pose a threat to the national security.

The cabinet touched on what the UN Security Council took regarding the oil tanker (Safer) anchored in Ras Issa port in Yemen since several years ago, with an increased risk of its decomposition or explosion, and the occurrence of an environmental, economic and humanitarian catastrophe for Yemen and neighboring countries, reiterating the Kingdom's condemnation of the irresponsible practices of the terrorist Houthi militia. The Cabinet called upon the Security Council to declare strong and decisive measures as well as to eliminate the threat posed by the tanker. 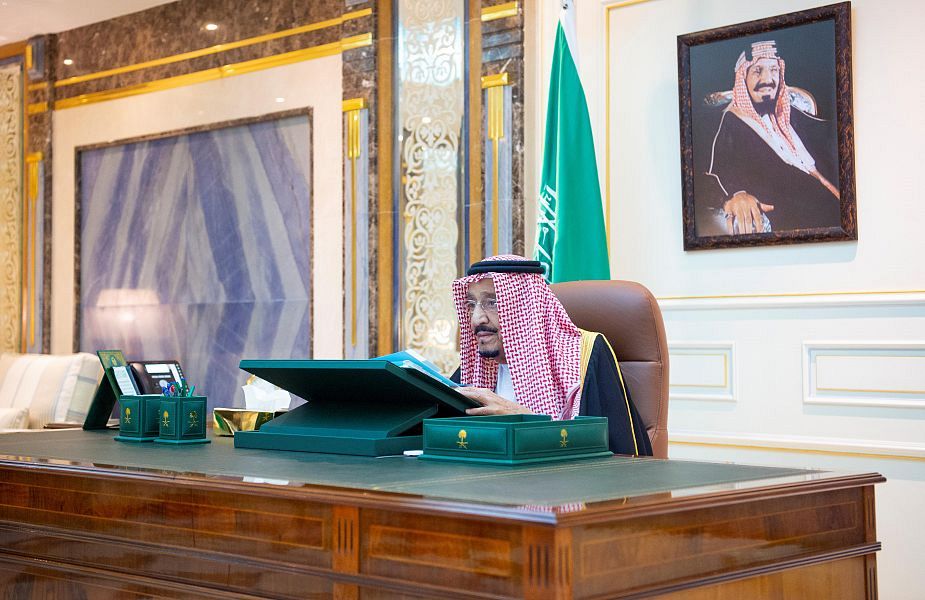 The Cabinet reviewed the topics on its agenda and concluded the following:

Authorization of the Minister of Interior - or his deputy- to negotiate with the Benin side regarding a draft memorandum of understanding for cooperation in the field of civil protection and civil defense between the government of the Kingdom of Saudi Arabia and the government of the Republic of Benin, sign it and then submit the final signed copy to complete the regular procedures.

Approval of a memorandum of cooperation in the field of intellectual property between the Saudi Authority for Intellectual Property in the Kingdom of Saudi Arabia and the Japanese Patent Office in Japan.

Authorization of the Minister of Foreign Affairs - or his deputy- to negotiate with the Federation of Arab Banks a draft headquarters agreement between the government of the Kingdom of Saudi Arabia and the Union of Arab Banks regarding the union’s regional office, sign it and then submit the final signed copy to complete the regular procedures.

Authorization of the Minister of Communications and Information Technology - or his deputy- to negotiate and take the necessary steps regarding the approval of the draft charter for the establishment of the digital cooperation organization, and to submit result to complete the regulatory procedures.

The Cabinet approved a protocol to amend paragraph (A) of Article (50) of Chicago International Civil Aviation Convention aiming to increase in members of the Council of the International Civil Aviation Organization (ICAO) to (40) members, and a protocol to amend Article (56) of the convention to increase the number of members the Air Navigation Committee to (21) members.

The Cabinet approved a memorandum of understanding between Saudi Food and Drug Authority of the Kingdom of Saudi Arabia and the National Health Regulatory Authority (NHRA) of the Kingdom of Bahrain for cooperation in the field of pharmaceutical, devices, supplies, medical products and clinical studies.

The Cabinet approved a memorandum of understanding for cooperation in the field of combating human trafficking between the Human Rights Commission of the Kingdom of Saudi Arabia and the United Nations Office on Drugs and Crime (UNODC).

The Cabinet approved to amending a paragraph (1) of Article (5) of King Abdulaziz Foundation’s structure for endowment libraries issued by Cabinet’s Resolution No. (389) dated on 15/9/1437 AH to make the Minister of Culture as a deputy chairman of the Board of Trustees.

The Cabinet approved the organizational arrangements for the rural development and sustainable agriculture program.

The Cabinet approved a number of promotions at 14th and 15th ranks.

The Cabinet was briefed on a number of issues on its agenda, including two annual reports of Saudi Standards, Metrology and Quality Organization and Real Estate Development Fund. In this regard, the Cabinet took relevant recommendations.