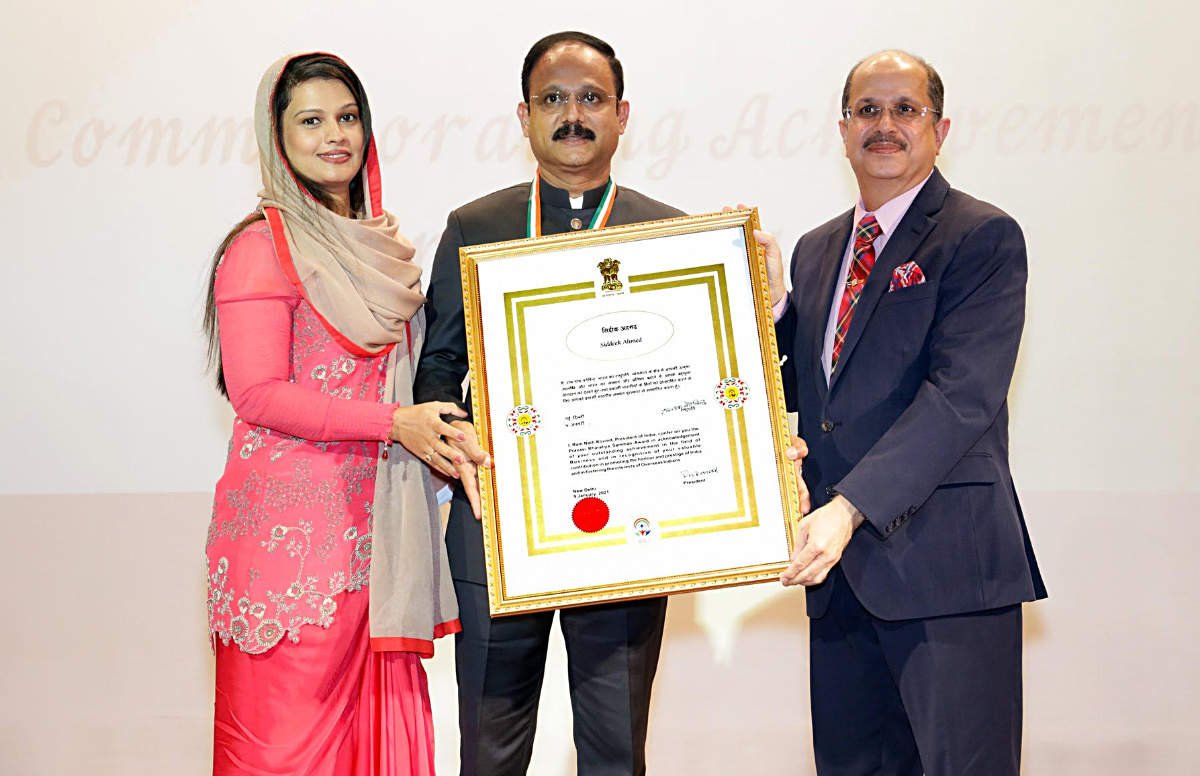 At a special ceremony held at the Indian Embassy to mark India’s Independence Day, Eram Group Chairman and Managing Director Dr. Siddeek Ahmed, was officially presented with the 2021 prestigious ‘Pravasi Bharatiya Samman Award’ (PBSA) by Dr. Ausaf Sayeed, Indian ambassador to Saudi Arabia, here recently. This year, Dr. Ahmed was one of only four recipients from the Middle East and the only one representing the Kingdom.

Conferred by the president of India as a part of the Pravasi Bharatiya Divas (PBD) Conventions organized annually since 2003, this coveted award acknowledges august members of the Indian community and their tangible contribution in the field of social and humanitarian upliftment. The coronavirus pandemic didn’t allow for the more elaborate ceremony that is usually held in New Delhi annually every year, but the sense of occasion and sentiment was palpable at the embassy.

Ambassador Dr. Sayeed congratulated Dr. Siddeek and spoke about the contributions made by the recipient. Pravasi Bharatiya Samman Award (PBSA) is India's most prestigious award for non-resident Indians, which is given in recognition of the contributions made by a member of the Indian community and their substantial involvement in acts of charity, philanthropy and social upliftment. The 2021 Pravasi Bharatiya Samman Award (PBSA) is won by Dr. Siddeek Ahmed, Chairman of Eram Group, a business conglomerate with global operations in several sectors, including oil and gas, power, construction, manufacturing, travel, healthcare, IT, media, logistics, automotive and training & education.

Ambassador Dr. Sayeed presented the award to Dr. Siddeek at the Indian embassy in the presence of Indian diplomats, Saudi guests, and several prominent Indian expatriates. Dr. Siddeek is a business visionary, an entrepreneur par excellence, and an ardent humanitarian. With over 20 years of experience in business and contractual activities, he has been consistently leading his highly diversified business conglomerate, Eram Group, from one success to the next since the mid 1980s.

Recognized by Forbes Middle East as one of the Top 20 Indian leaders 2015 in the Arab world, Dr. Siddeek was also conferred with the Honorary Doctorate by Kings University, United States, for his philanthropic activities and business excellence. Customer-focused, value-driven, and employee-friendly, he has a natural flair for directing and promoting diversified enterprises ranging from industrial services, research & development, manufacturing, trading,  and construction activities.

Expressing his gratitude to Indian President Ram Nath Kovind and Prime Minister Narender Modi for the honor and thanking the Pravasi Divas committee, Dr. Siddeek said, “My contribution to society is something that I have learned from my parents. They have always been soft and generous to people’s sufferings and what I do today is what I have seen growing up. It’s an irreplaceable part of my life”.  Dr. Siddeek, who hails from Kerala, has 25 years of experience under his belt and has built an enviable business empire, mainly because of his intent to use his expertise and his corporate infrastructure for the benefit of rural India.

Today, Eram Group is an active contributor to the 'Make in India' Initiative and Swachh Bharat Mission (Clean India Mission) which is a country-wide campaign initiated by the Government of India in 2014 to eliminate open defecation and to improve solid waste management. By collaborating with the Bill and Melinda Gates Foundation, Dr. Ahmed extended his vision and outstanding technology in the sanitation sector through his company, Eram Scientific Solutions.

The innovative 'e-Toilet' which is an automated public sanitation solution, was duly showcased in the UN Innovation exhibition and recognized by the UN's country representative for its game-changing potential. This win is a testament to his unwavering commitment to addressing the critical challenges faced by humanity, including access to clean sanitation, environmental issues, skilling the underprivileged,  and responsible and sustainable living through integrity, innovation and ideas.

To this end, it is also important to note that Indian Prime Minister Narendra Modi bestowed on Dr. Siddeek the Toilet Titan award at the Safaigiri Summit in 2015, a salute to the Eram work ethos and the dedication of its 8,000 plus employees from over 20 plus countries. Dr. Siddeek, whose life story is similar to countless other expatriates, is now an inspiration to young Indians. Born in the tiny village of Mankarai in the district of Palakkad, Kerala, India as the second youngest of nine children, he was deeply influenced by the generous and compassionate nature of his late parents, Panamtharayil Ahmed Haji and Mariyumma.

Dr. Siddeek strongly believes that the inculcation of such noble and humanitarian values, very early in his childhood, laid the foundation for his philanthropic pursuits today. In his early twenties, after acquiring a Diploma in Electronics, he set off for the Middle East, seeking a brighter future and pursuing his passion. What set him apart from the rest was his determination and attitude. When most expatriates left when the Gulf War broke out, Dr. Siddeek stayed in the Middle East. He took advantage of the myriad opportunities that presented themselves when the countries started to rebuild after the war.

With funds from his own pockets and contributions from a few supportive friends, Dr. Siddeek set about building an impressive conglomerate. Over the years, the organic growth was evident owing to his futuristic vision, persistence, and ability to capitalize on niche market opportunities setting up a strong foundation for the company. Based in Gulf Cooperation Council (GCC) region, Eram Group today is a diversified conglomerate mainly operating in oil & gas, power & utilities, travel, food, healthcare, and automotive sectors.

From humble beginnings in the 1990s and under the charismatic leadership of Dr. Siddeek has now grown to over 40 well-managed companies with strategic locations in Asia, Europe, and North America. Eram Group has its global headquarters in Al Khobar (Saudi Arabia) and regional headquarters in Dubai (UAE). Eram Group has also successfully established social enterprises in the public sanitation and educational sectors, which has won global acclaim.

Even being a first-generation family business, Eram has achieved phenomenal growth and earned an impeccable reputation, owing to its professional and customer-focused approach. Eram has created winning partnerships with globally renowned firms and has won world-class clients. Besides being committed to society and social causes, the Eram Group invests its resources in making the world a better place through its charitable ventures and in collaboration with humanitarian organizations such as the UN, Bill & Melinda Gates Foundation, governments, and NGOs.