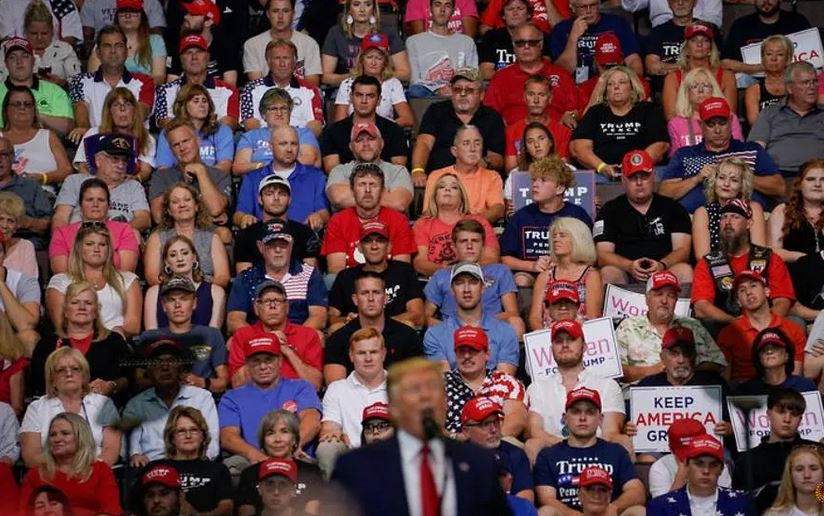 Supporters of US President Donald Trump look on as Trump speaks during a campaign rally in Cincinnati, Ohio, US, Aug 1, 2019. (Photo: REUTERS/Bryan Woolston)
NEW YORK - Reuters

For Trump, appeals to white fears about race may be a tougher sell in 2020

US President Donald Trump's anti-immigrant rhetoric and focus on the grievances of white voters helped him win the 2016 election. But a Reuters analysis of public opinion over the last four years suggests that Trump's brand of white identity politics may be less effective in the 2020 election campaign.

The analysis comes amid widespread criticism of Trump's racially charged comments about four minority women lawmakers and the fallout from a mass shooting of Hispanics in El Paso, Texas, that many Democratic presidential candidates swiftly blamed on the president's rhetoric.

Reuters/Ipsos polling of 4,436 US adults in July showed that people who rejected racial stereotypes were more interested in voting in the 2020 general election than those who expressed stronger levels of anti-black or anti-Hispanic biases.

In 2016, it was the reverse. The Reuters analysis shows that Trump’s narrow win came at a time when Americans with strong anti-black opinions were the more politically engaged group. While Reuters did not measure anti-Hispanic biases in 2016, political scientists say that people who express them closely overlap with those who are biased against other racial minorities.

“There is some indication that racial liberals are more energised than the racially intolerant,” said University of Michigan political scientist Vincent Hutchings, who reviewed Reuters’ findings. “That would seem to be good news for the Democrats and bad news for the Republicans.”

The July poll did have a silver lining for Trump. Most white Republicans approve of his performance in office. And over the past four years they have become increasingly supportive of his signature issue: expanding the wall along the US-Mexico border. Some 82 per cent now support it compared to 75 per cent last year.

Trump is clearly still as popular as ever with conservatives who dominate the predominantly white, working-class communities that helped him win in 2016, said Duke University political scientist Ashley Jardina, who also reviewed the poll findings.

In his 2016 campaign, Trump focused on the grievances of white voters who feared the global economy was leaving them behind and who wanted more restrictions on immigration. He employed put-downs of Latino immigrants and inner-city, typically black, residents.

He said then that Mexicans were "murderers" and "rapists," and as recently as last year, Trump labelled illegal immigration to the United States an “invasion."

Trump has asserted repeatedly that his words are not meant to be racially divisive. "I think my rhetoric ... brings people together," he said earlier this month.

Responding to the Reuters polling analysis, a spokesman for Trump's reelection campaign, Daniel Bucheli, said the president "enjoys broad support from diverse groups of Americans, and this coalition of supporters, to include minorities and first time voters, continues to grow daily."

"If there is something we've come to learn about President Trump is that he calls it like it is," Bucheli said, when asked about Trump's recent comments about the lawmakers and others.

The White House did not respond to a request for comment on the poll findings.

The Reuters analysis also found that Americans were less likely to express feelings of racial anxiety this year, and they were more likely to empathise with African Americans. This was also true for white Americans and whites without a college degree, who largely backed Trump in 2016

White Americans are also 19 percentage points more supportive of a path to citizenship for illegal immigrants and 4 points less supportive of increased deportations, when their responses from the July poll were compared with a Reuters/Ipsos poll in January 2015.

The poll also found that 17 per cent of whites and 26 per cent of white Republicans said they strongly agree that “white people are currently under attack in this country, a drop of about 6 points and 8 points respectively from 2017.

Paula Ioanide, an expert in American race relations at Ithaca College, said the poll findings were consistent with her research that racial anxieties among whites peaked during the presidency of Barack Obama.

Some white Americans “are not feeling as under attack as they did in 2016,” Ioanide said. With Trump in the White House, “they’ve seen a kind of endorsement of the kinds of things that they wanted: A restoration of a white identity that they previously had felt was under attack.”

Reuters and its polling partner, Ipsos, developed its race poll with political scientists at the University of Michigan and Duke University, asking a series of questions that measured respondents' perceptions of people from different racial backgrounds, the treatment of blacks and whites in America and their interest in voting in 2020.

Among whites who dominate the American electorate, the poll showed a widening gap between the way Democrats and Republicans view race.

The number of Democrats who said blacks were treated unfairly in the workplace and by police grew by 8 points and 11 points, respectively since 2016. There was almost no change, however, among white Republicans.

White independents were more empathetic toward blacks than white Republicans, but less empathetic than Democrats.

Michael Tesler, a political scientist at the University of California, Irvine, said Trump may be influencing many Democrats and Democrat-leaning independents in their views on race.

“They may not care that much about race initially, and then they see Trump pushing on race so hard on race,” he said. “And so they push back.”

Samantha Burkes, 36, of Bullhead City, Arizona said she was doing just that when she rated blacks well above whites in terms of intelligence, work ethic, manners, peacefulness and lawfulness in the Reuters/Ipsos poll.

“I just wanted to express that I don’t think black people are worse than white people,” said Burkes, a white Democrat who plans to vote against Trump in 2020. “I’m just lashing out, really.”