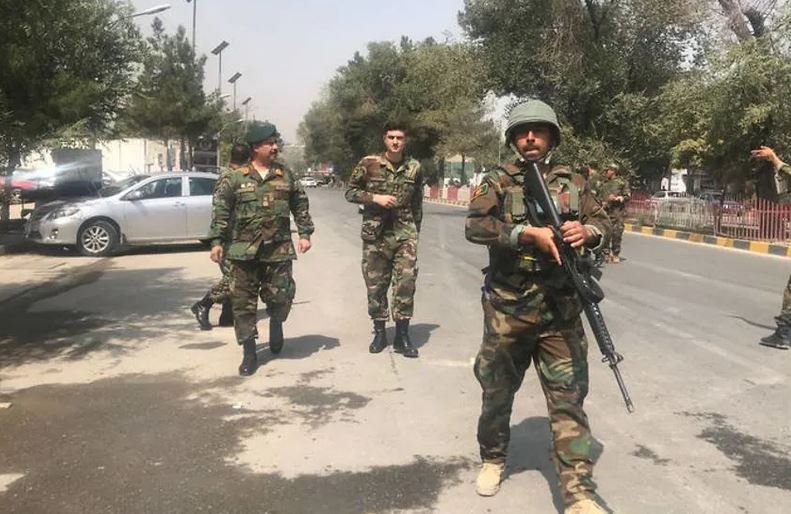 Security forces are seen near the site where suicide bomber blew himself up in the centre of Kabul, Afghanistan Sep 5, 2019. (Photo: REUTERS/Omar Sobhani)
KABUL - AFP

A Taliban suicide blast in the centre of Kabul killed at least 10 people and wounded more than 40 on Thursday (Sep 5), destroying cars and shops in an area near the headquarters of Afghanistan's NATO force and the US embassy, officials said.

The Taliban claimed responsibility for the attack even as the insurgents and U.S. officials have been negotiating a deal on a US troop withdrawal in exchange for Taliban security guarantees.

"At least 10 civilians have been killed and 42 injured were taken to hospitals," said Nasrat Rahimi, a spokesman for the interior ministry in Kabul.

Video footage and photographs posted on social media showed several cars and small shops torn apart by the blast at a checkpoint on a road near the NATO office and US embassy. Police cordoned off the area.

Witnesses said the suicide bomber blew himself up as hundreds of people were standing or crossing the road.

Besmellah Ahmadi said he suffered minor wounds in the blast and sought shelter in a shop.

"My car windows were shattered. People rushed to get me out of the car," he told Reuters.

Massoud Zazai, who owns a photo studio across the street from the blast site, said he was in his shop when the explosion happened.

"I fell off my chair and it got dark inside the shop because of smoke and dust," Zazai told AFP.

"I went out to the scene moments after the attack, the side of the road was littered with debris and bodies."

Through the smoke, Zazai said he could hear injured people crying and calling for their mothers and brothers.

"I saw at least five very badly injured, one was covered in blood and not moving. It was horrifying."

On Monday, a Taliban suicide truck bomber attacked a compound used by international organisations in Kabul, killing at least 16 people and wounding more than 100.

The capital has been gripped by a surge in deadly violence even after the US and the insurgents reached an agreement "in principle" that would see the Pentagon pull thousands of troops from Afghanistan in return for various Taliban security promises.

But there is increasing unease about the deal, with Afghans fearing it will lead to a return of the Taliban to power, and a growing chorus of US lawmakers and officials expressing doubts.

The US top negotiator for peace in Afghanistan, Zalmay Khalilzad said this week the two sides had drawn up a draft framework agreement under which US troops would leave five military bases in Afghanistan within 135 days of the signing of the pact.

There are some 14,000 US troops in Afghanistan, deployed at various bases across the country.

Khalilzad is expected to meet Afghan and NATO officials to explain the draft agreement, which must still be approved by US President Donald Trump before it can be signed.

Khalilzad, a veteran Afghan-American diplomat, has shared details of the draft with Afghan President Ashraf Ghani, and sought his opinion before firming up an agreement that could bring an end to America's longest military intervention overseas.

But Ghani's government is seeking clarification from the United States on the draft agreement.

Even as negotiations for an accord have entered what are widely considered to be the final stages, violence has surged across Afghanistan.

On Saturday, the Taliban attempted to seize the provincial capital of Kunduz in the north and sporadic fighting has continued on the outskirts all week, while on Sunday, insurgents launched an operation in the city of Pul-e Khumri, the capital of neighbouring Baghlan province.