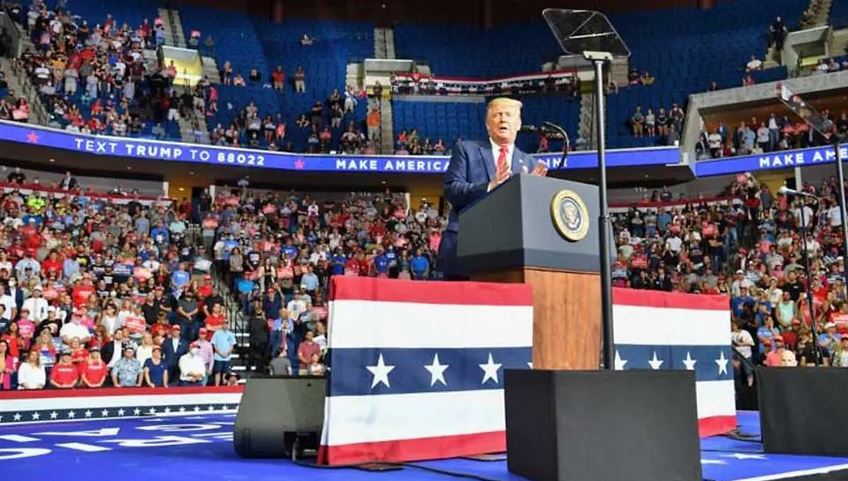 US President Donald Trump speaks during a campaign rally at the BOK Center on Jun 20, 2020 in Tulsa, Oklahoma. (Nicholas Kamm/AFP)
WASHINGTON, DC - AFP

US President Donald Trump will host an outdoor campaign rally in New Hampshire, his team said on Sunday (Jul 5), after his last rally drew criticism for ignoring coronavirus health guidelines.

The "Make America Great Again" event will take place on Jul 11 in Portsmouth, his campaign said in a statement.

"There will be ample access to hand sanitizer and all attendees will be provided a face mask that they are strongly encouraged to wear," the rally announcement said.

The billionaire Republican, who is seeking reelection on Nov 3, had made his grand return to the campaign trail on Jun 20 in Tulsa, Oklahoma.

The event quickly came under fire for flouting health measures aimed at slowing the spread of the coronavirus, such as wearing face masks or maintaining social distancing.

Images of the rally showed the stadium was filled to less than a third of its capacity, despite the president's campaign boasting of huge interest ahead of time and more than a million ticket requests.

Pictures of Trump's return to the White House in the middle of the night, with a worn-out air and his tie undone, cemented the image of a flawed comeback.

With just four months left before election day, Trump - criticised for his response both to the coronavirus pandemic and to anti-racism protests - has been lagging for weeks in the polls behind his Democratic rival, Joe Biden.

While there have been calls for caution in interpreting the poll results, observers have noted that Biden's lead over Trump is far greater than the one held by Democratic nominee Hillary Clinton at the same point in 2016.