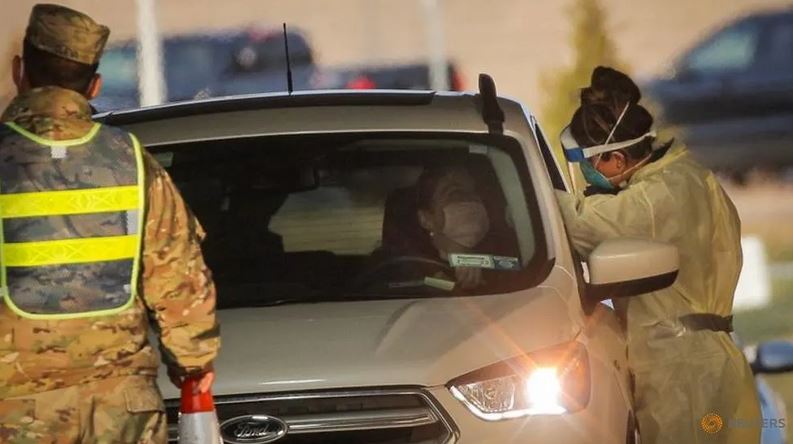 Top US health officials announced plans on Tuesday to begin vaccinating Americans against the coronavirus as early as mid-December, as nationwide deaths hit the highest number for a single day in six months.

About 20 million people could be inoculated against COVID-19 by the end of 2020 and most Americans will have access to highly effective vaccines by mid-2021, the chief adviser of President Donald Trump's Operation Warp Speed program said.

"Within 24 hours, maybe at most 36 to 48 hours, from the approval, the vaccine can be in people's arms," Moncef Slaoui, a former GlaxoSmithKline executive who is overseeing the vaccine portion of the US programme, said at an event conducted by the Washington Post newspaper.

His comments came on the same day that another 2,295 fatalities nationwide were linked to COVID-19, even before California, the most populous US state, reported full results. Officials in several states said numbers were higher in part due to a backlog from the Thanksgiving holiday.

A statement from the public health director for Los Angeles County highlighted the ravages of the surging pandemic. Barbara Ferrer, the public health director, said that while Tuesday was the county's "worst day thus far" of the pandemic, "it will likely not remain the worst day of the pandemic in Los Angeles County. That will be tomorrow, and the next day and the next as cases, hospitalisations and deaths increase".

Health officials pleaded with Americans to stick with coronavirus restrictions even with a vaccine in sight.

The US Centers for Disease Control and Prevention (CDC) is moving to shorten the length of self-quarantine recommended after potential exposure to the coronavirus to 10 days, or seven days with a negative test, a federal spokesperson said on Tuesday.

The CDC currently recommends a 14-day quarantine in order to curb the transmission of the virus.

TIMELINE ON A VACCINE

About 60 million to 70 million doses of COVID-19 vaccine could be available per month beginning in January, after the expected regulatory approval of products from Pfizer and Moderna, Slaoui said.

A Food and Drug Administration (FDA) panel of outside advisers will meet on Dec 10 to discuss whether to recommend emergency use authorisation of the Pfizer vaccine, developed with German partner BioNTech SE. Moderna's vaccine candidate is expected to be reviewed a week later.

The timeline described by Slaoui and Health and Human Services Secretary Alex Azar appeared to assume that the FDA's authorisation of the first vaccine would come within days of the Dec 10 meeting.

But the head of the FDA's Center for Biologics Evaluation and Research, Dr Peter Marks, told patient advocacy groups last week that it might take "a few days to a few weeks".

The US Transportation Department said on Tuesday it has made preparations to enable the "immediate mass shipment" of COVID-19 vaccines and completed all necessary regulatory measures.

An estimated 21 million healthcare workers and 3 million residents of long-term care facilities should be first in line to receive a vaccine, according to a recommendation voted on by a CDC panel of advisers on Tuesday.

Nursing homes are experiencing the worst outbreak of weekly coronavirus cases since the spring, according to the American Health Care Association and National Center for Assisted Living.

State and local officials have returned to imposing restrictions on businesses and activities in response to the latest surge of a pandemic that killed 37,000 people in November.

A record nearly 96,000 COVID-19 patients were reported in US hospitals on Tuesday, according to a Reuters tally.

Hospitalisations and deaths are expected to spike even higher during the holiday travel season, a trend that officials warn could overwhelm already strained healthcare systems.

The monthly death toll from COVID-19 is projected to nearly double in December to a pandemic-high of more than 70,000 and surpass 76,000 in January before ebbing in February, according to a widely cited model from the University of Washington's Institute for Health Metrics and Evaluation.

Pandemic-related restrictions have ravaged the US economy. A bipartisan group of U.S. lawmakers on Tuesday unveiled a US$908 billion COVID-19 relief Bill aimed at breaking a deadlock over emergency assistance for small businesses, industries and the unemployed.