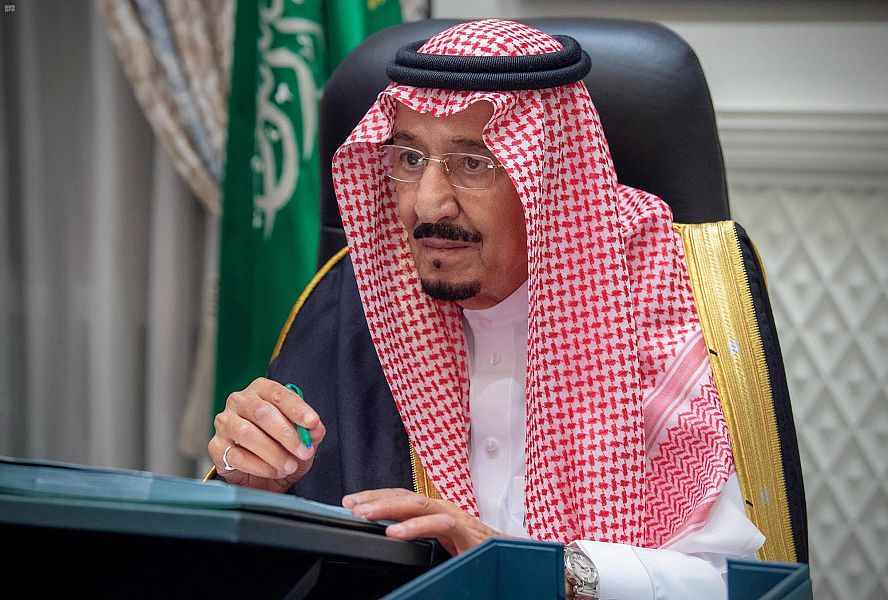 At the outset of the meeting, the Cabinet praised the support
offered by the Custodian of the Two Holy Mosques and HRH the Crown
Prince to all state agencies to ensure providing high level of services
for citizens and residents and achieve the goals of Vision 2030, hailing
in this regard the Kingdom's pioneering achievement in the first
edition of the Arab Government Excellence Award.

The Cabinet was briefed on the developments of the Coronavirus pandemic locally and internationally.

In a statement to Saudi Press Agency (SPA) following the meeting,
Acting Minister of Media Dr. Majid bin Abdullah Al-Qasabi said that the
Cabinet reviewed the latest developments regionally and internationally,
reaffirming the Kingdom's keenness on achieving security and
development for the brotherly people of Yemen; moving forward to
implement Riyadh Agreement to promote peace and stability; reaching a
comprehensive political solution according to the three references; and
the Coalition's political, military, security, relief and development
efforts for Yemen.

The Cabinet addressed the Digital Cooperation Organization announced
by the Kingdom of Saudi Arabia, the Kingdom of Bahrain, the Kingdom of
Jordan, the State of Kuwait and the Islamic Republic of Pakistan, which
aims at enhancing capabilities among member states to transform and
adapt to the global economy, in addition to developing the joint digital
economy to a trillion dollars over five years.


Dr. Al-Qasabi pointed out that the Cabinet reviewed the efforts exerted
by the State to uproot corruption, as a trans-border crime, indicating,
in this context, the agreement co-signed by the Oversight and
Anti-Corruption Authority (NAZAHA) and the UN Office on Drugs and Crime
to carry out Riyadh Initiative, aiming at consolidating international
cooperation among law-enforcing agencies relating to fighting
corruption.

He said the Cabinet pointed to the Kingdom’s support for the
Initiative through donating $10m, in addition to the support extended to
all pertinent international organizations, including the Interpol, the
Financial Action Task Force (FATF), Combating Money Laundering and
Terrorism Financing Commission (The Egmont Group) and the Organization
for Economic Co-operation and Development (OECD).

The Cabinet reiterated denunciation of the terrorist attack that
targeted civilians, in North-eastern Nigeria, resulting in scores of
dead and injured, expressing condolences and consolation to the families
of the victims and to Nigerian government and people, wishing the
injured a speedy recovery.

The Cabinet reaffirmed the Kingdom’s stance along the side of the
fraternal Federal Republic of Nigeria against such heinous acts which
target lives of the innocents and destabilize security and stability.

Then, the Cabinet reviewed issues on its agenda, and issued the following decisions:


First: The Cabinet authorized the Minister of Interior, or his deputy,
to discuss and sign a draft memorandum of understanding on cooperation
in the field of civil defense and civil protection between the Ministry
of Interior of the Kingdom of Saudi Arabia and the Home Office of the
United Kingdom of Great Britain and Northern Ireland.

Second: The Cabinet approved a memorandum of cooperation between the
National Competitiveness Center of the Kingdom of Saudi Arabia and the
United Nations represented by the Office of Legal Affairs regarding the
financial contribution to the UNCITRAL Trust Fund.

Third: The Cabinet approved the executive regulation of the Juvenile Law.

Fourth: The Cabinet approved the Chambers of Commerce Law.

Fifth: The Cabinet approved the implementation of the decision of
the GCC Supreme Council, approving the general framework of the strategy
of the joint GCC municipal action for the next five years.

Sixth: The Cabinet authorized the Board of Directors of the
Communications and Information Technology Commission to hold public
auctions for the frequency spectrum for commercial purposes.

Seventh: The Cabinet approved a number of promotions at the 14th rank and a post of Minister Plenipotentiary.

The Cabinet was briefed on a number of issues on its agenda and took relevant recommendations.