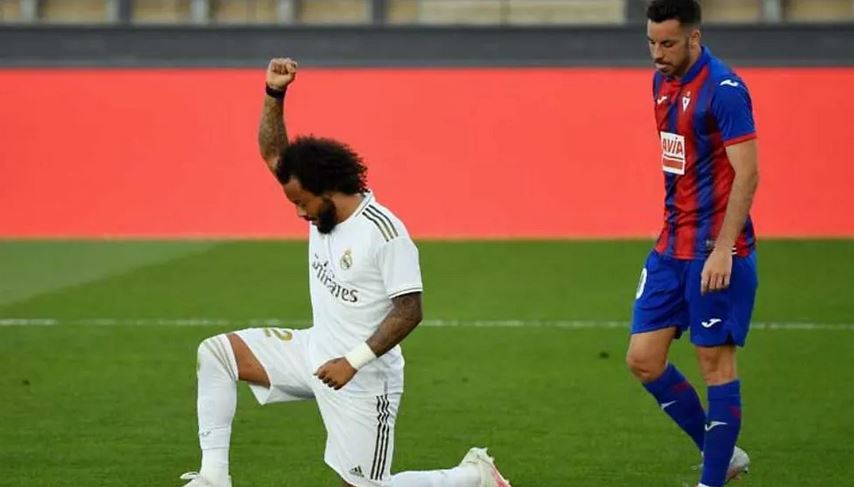 Marcelo celebrated by taking a knee as Real Madrid returned from three months away following the coronavirus suspension by beating Eibar 3-1 on Sunday (Jun 14).

After scoring Madrid's third goal in the 37th minute, Marcelo dropped onto his left knee and raised his clinched right fist into the air, apparently in support of the Black Lives Matter movement.

Madrid's win may have come at a cost as Eden Hazard and Sergio Ramos were both substituted early in the second half and were seen with ice packs strapped to them while sitting in the stands.

Hazard was making his first start since February and his ice pack appeared to be around his troublesome right ankle, which he injured in November and February, before undergoing surgery in March.

"We knew Eden would lack a bit of rhythm playing the whole game," Zidane said.

"He played well for an hour, he took a knock which was a scare but at half-time he said he was fine. He is happy with what he has done and we are happy with him."

Madrid's win means they reduce the gap behind league leaders Barcelona back to two points after the Catalans thrashed Real Mallorca 4-0 on Saturday.

Madrid struck in the fourth minute after a superb strike from Toni Kroos before Ramos tucked away Hazard's pass on the counter-attack.

Eibar pulled one back in the second half through Pedro Bigas but never found the second to make Madrid nervous, despite a brief spell of pressure.

Before going off, Hazard was busy, the Belgian involved in all three goals.

His weaving run through midfield led to Kroos' shot and it was his effort that was cleared out to Marcelo, who drove into the corner.

After a miserable opening season in Spain, it was a bright start for Hazard, who could now redeem himself by playing a crucial role in the run-in, if he can stay injury-free.

Perhaps even more impressive though was Karim Benzema, who linked up brilliantly with Hazard and was unfortunate not to get the goal an excellent all-round performance deserved.

Gareth Bale started on the bench but came on and could start against Valencia on Thursday.

Zidane is likely to rotate heavily over the next few weeks, with the games coming thick and fast.

Madrid's coach will also have been pleased to get off to a positive start in their new training ground home, which was the 100th different stadium to be used in La Liga.

They will be playing all their remaining home matches at the Alfredo di Stefano Stadium to allow renovation work at the Santiago Bernabeu to continue this summer.

"We know the situation, it's all a bit strange," said Zidane. "But the players are all champions and we have to get our heads around it."

Barca had needed less than two minutes to score against Mallorca and Madrid were only slightly later, as Hazard broke through Eibar's midfield and Casemiro set Benzema free.

The ball was cleared to Kroos on the edge of the area, who struck first time, sidefooting perfectly into the far top right-hand corner.

Ramos doubled their advantage after starting, and finishing, a ruthless counter-attack. In between, Benzema and Hazard were involved again, the former picking out the latter, who generously gave Ramos an open goal.

Marcelo put Eibar all but out of sight before half-time as Benzema played through for Hazard and his shot spilled out to Marcelo to lash into the corner.

Eibar were better after the break as Edu Exposito forced a full-stretch save from Thibaut Courtois and then Sergi Enrich headed against the crossbar. Bigas did score after diverting in Pedro Leon's shot but Madrid held on.

Earlier, Diego Costa scored his first goal since October but Atletico Madrid missed the chance to move into La Liga's top four by drawing 1-1 away at Athletic Bilbao.

Costa celebrated by holding up the shirt of Virgina Torrecilla, a player from Atletico's women's team, who underwent surgery on a brain tumour last month.

His equaliser came two minutes after the excellent Iker Muniain had given Bilbao the lead towards the end of the first half and neither side could find a winner at the empty San Mames, with Atletico defender Santiago Arias missing the best chance late on.

Diego Simeone's side stay sixth, now level on points with both Getafe and Real Sociedad in front of them, although la Real have a game in hand against Osasuna to come later on Sunday.