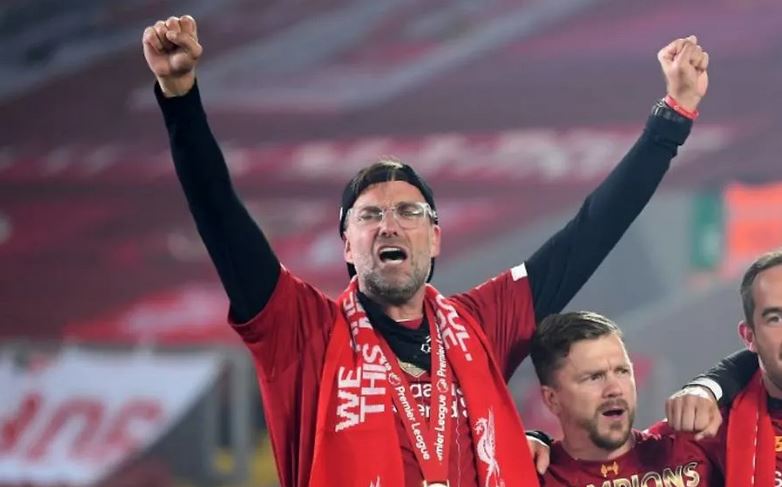 The English Premier League (EPL) season kicked off last night (Sep 12) with defending champions Liverpool off to a winning start in a pulsating 4-3 win over Leeds United.

The win would seem all too familiar for Liverpool, coming off the back of a phenomenal season as they romped to their first EPL title in 30 years.  The Reds were unstoppable, breaking several records in their best-ever top flight campaign.

In February, Liverpool beat Manchester City’s record of most consecutive home wins – going on to win 24 games in a row at Anfield compared to City’s 21 games set eight seasons ago.

This amazing run during the season saw them win a record 32 games.

They wrapped up the title in July with seven matches left to go – the earliest title win in the history of the EPL.

CAN THEY REPEAT THIS FEAT?

Yet, observers and pundits are questioning Liverpool’s ability to win the coming campaign.

For one, some believe the Merseyside team won’t be able to reproduce the mentality to match their previous feat.

“To get to a Champions League final, win it the following season, and then to go again to win the Premier League title is a huge emotional drain on that group of Liverpool players for three years,” former Manchester United full-back and current pundit Gary Neville said.

“To ask them to go again and achieve that same standard would be a superhuman effort."

“Even with reinforcements it would be very difficult for the Reds to match last season’s form; without them it would be almost impossible,” former Reds striker Stan Collymore told British media.

The lack of new big-name signings is particularly worrying for Liverpool’s title chances for three reasons.

One, the club’s squad is thin in quality compared to its main rivals, namely Chelsea and Manchester City. Both have world-class players on their benches, not just in their starting line-ups.

Two, squad depth could be particularly critical this time around as the EPL rushes to complete its season in about six weeks fewer than in past seasons due to COVID-19 delaying the end of the previous campaign.

The three goals conceded against newly promoted Leeds United early this morning would have underscored the need for defensive reinforcements.

Liverpool conceded the least amount of goals in the last two EPL seasons, making defence its key comparative advantage. Losing it will erode its competitiveness and title chances.

THE MENTALITY OF CHAMPIONS

But what the likes of Neville forget is that Jurgen Klopp’s teams have made a habit of defying the odds.  “We know the title-winners have an excellent mentality, so of course they will be competitive once again. Under boss Jurgen Klopp, that’s practically a given,” Collymore acknowledged.

The German coach has instilled a strong winning mentality in his side, which is yet grounded in humility.

This allows the team to focus on its task at hand – literally taking each game as it comes – without entertaining dreamy title talks and engaging in any psychological mind games with its rivals. So much so that the British media has dubbed Klopp’s team “mentality monsters”.

This explains how in the 10 games that they were trailing in last season, Liverpool fought back to win six of them and draw one, claiming 19 points from losing positions – second only to Wolves.

It is this winning mentality that could drive Liverpool’s “superhuman effort” to outperform itself for a third consecutive season, as this morning's result has indicated. Despite Leeds equalising thrice, Liverpool fought back for a winner each time with its fourth and deciding goal coming in the final minutes of the match. This never-say-die attitude of last season still burns brightly in the Reds' dressing room.

“Liverpool will be up there this season, make no mistake about it, they are still the team to beat,” former Arsenal midfielder and current pundit Paul Merson said.

"The one thing they bring to the table above all else is consistency.”

TALENT COMING THROUGH THE RANKS

Yes, Liverpool fans would have loved to see the club show more ambition in the transfer market to bolster the squad and solidify their pole position.

But the lack of big-name purchases shouldn’t be read as a drop in ambition.

Rather, it is due to the uncertainty in the club’s future revenue, particularly in match receipts, as the pandemic still prevent teams from playing in front of spectators. This has been compounded by Liverpool’s growing wage costs, which have doubled since 2015.

Yet, from the receipts of its player sales, the club has bought Greek left-back Kostas Tsimikas as a back-up for the marauding Andy Robertson and could add Spanish playmaker Thiago Alcantara from Bayern Munich, who is likely to become a key player for the team, if they can negotiate a favourable price.

Moreover, unlike some of his counterparts in the EPL, Klopp is less inclined to make large marquee signings than he is to mould raw and unproven talent.

The likes of Sadio Mane, Mohamed Salah, Roberto Firmino and Van Dijk weren’t exactly the world-class household names they are now when Liverpool first bought them. The former Borussia Dortmund boss has a track-record of getting unfulfilled potential to outperform themselves.

He also has a knack of unearthing young talent. England’s recently crowned Young Player of the Year, Reds wing-back Trent Alexander-Arnold, is a case in point.

That is why Klopp is putting his faith in promoting youth players into the first team squad this season. Young midfielder Curtis Jones, who already had an impressive debut last season, is expected to play a more prominent role.

“You have to be creative and we try to be creative,” Klopp told media. “We try to find solutions internally and there is still a lot to come. We have three or four players who can make big steps.”

Klopp’s innovation also extends to fielding players in new positions, providing opponents an element of surprise and making the best of the resources available to him.

He has already hinted he may redeploy midfield anchor Fabinho in central defence while he tinkered with a new formation in the last friendly match against Blackpool, deploying Takumi Minamino, who only signed for the Reds in January, as a playmaker.

With such options at his disposal, no wonder Klopp is confident of his squad depth and being more prudent in the transfer market.

It is this quite assurance that the German has brought to the club that has become the secret sauce of its recent success. As long as Klopp remains at the club, he will find ways to motivate the players, bring the best out of them and drive a winning mentality.

With such options at his disposal, no wonder Klopp is confident of his squad depth and being more prudent in the transfer market.

It is this quite assurance that the German has brought to the club that has become the secret sauce of its recent success. As long as Klopp remains at the club, he will find ways to motivate the players, bring the best out of them and drive a winning mentality.