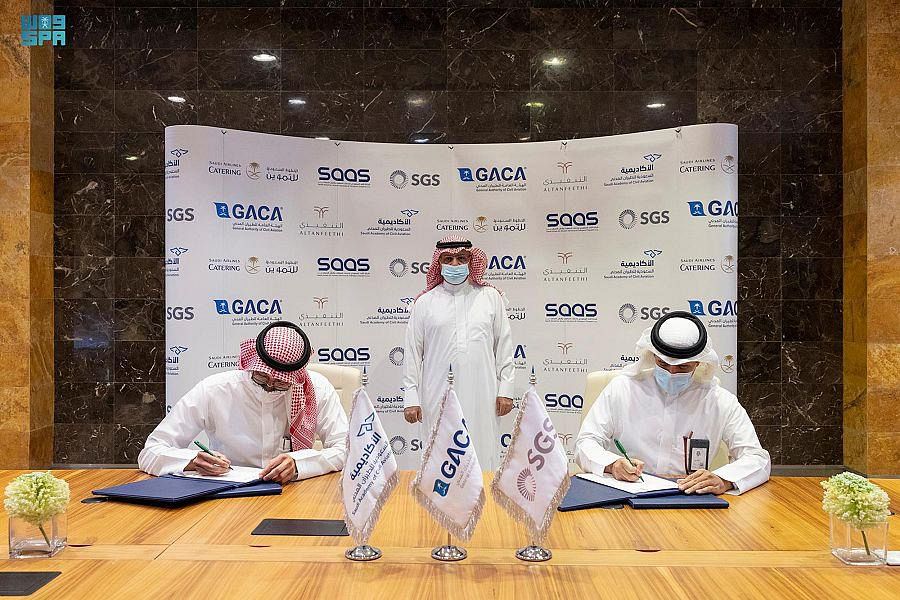 In the presence of the President of the General Authority of Civil Aviation (GACA), Abdulaziz bin Abdullah Al-Duailej, the Saudi Academy of Civil Aviation, which is affiliated with GACA signed today, at the headquarters of the Authority, partnership agreements in the field of training with the Saudi Ground Services Company (SGS), the Saudi Airlines Catering Company, Altanfeethi Company, and the Saudi Amad for Airport Services Company, with the aim of training and qualifying employees of companies in the academy through specialized programs and courses that comply with the legislation and regulations of GACA and international organizations.
The Saudi Academy of Civil Aviation was represented in signing the agreement by its CEO, Abdulmohsen bin Yousef Qashgari, while the Saudi Ground Services Company was represented by its CEO, Raed bin Hassan Al-Idrisi, while the Saudi Airlines Catering Company was represented by the CEO, Wajdi bin Mohammed Al-Ghabban, while the Altanfeethi Company was represented by Gilban bin Mohammed Al-Jalban, while Al-Amad Company was represented by its CEO, Ali bin Abdullah Al-Ghamdi.
For his part, the Academy’s President explained that these agreements come within the framework of the Academy’s direction to develop its partnerships in the field of training because of the effective and influential role it plays in developing the performance of employees and raising the level of quality of services provided, pointing out that the Academy will provide about 50 specialized training courses for company employees, which will contribute directly in raising the operational efficiency and the level of safety in the various airports of the Kingdom.
The CEOs of service companies stressed that signing these agreements comes within the strategic objectives of developing and qualifying human cadres with the latest training methods and techniques in accordance with best practices, and developing the performance of workers to provide the best services for all travelers. This in addition to ensuring that services are provided with high quality that takes into account the highest safety standards, noting the active role played by the Saudi Academy of Civil Aviation through the quality of its training programs accredited by the International Civil Aviation Organization (ICAO) and the International Air Transport Association (IATA).
It is worth noting that the Saudi Academy of Civil Aviation an affiliate of the General Authority of Civil Aviation recently obtained the accreditation of the Airports Council International (ACI-ATI) as the second training center in the world after the Munich Airport Training Center in Germany. It also won the seat of the Global Training Council of the International Civil Aviation Organization (ICAO). This in addition to renewing its accreditation from the International Air Transport Association (IATA) as an internationally accredited training center, as well as abtaining the accreditation of the International Council for Fire and Rescue Training Services.