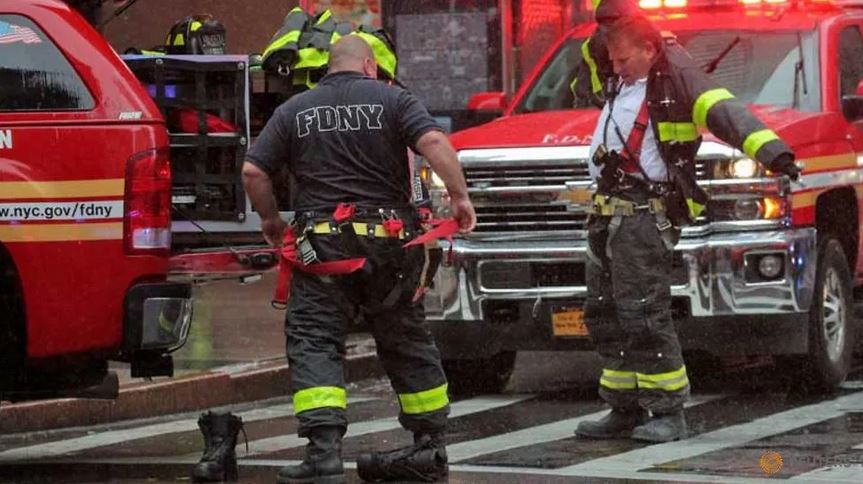 New York City firefighters suit up at the scene after a helicopter crashed atop a building and caused a fire in the Manhattan borough of New York. (REUTERS/Brendan McDermid)
NEW YORK - Reuters

A helicopter crashed onto the fog-shrouded roof of a midtown Manhattan skyscraper on Monday (Jun 10), killing at least one person and unnerving a city still scarred by memories of the Sep 11, 2001, airplane attacks on the World Trade Centre.

The crash occurred shortly before 2pm (Tuesday, 2am, Singapore time) on a rainy, gray day atop the 229-metre AXA Equitable Centre at 787 Seventh Avenue, a few blocks north of Times Square.

Dozens of emergency vehicles swarmed the area, shutting down traffic and evacuating offices in one of the city's busiest areas.

The person killed is "presumed" to be the pilot, New York City Mayor Bill de Blasio said at a news conference.

"The helicopter is pretty obliterated at this point. It was obviously a very hard hit," de Blasio said during the briefing.

He said the cause was unknown but that there was no indication the crash was an "act of terrorism." It was not clear if limited visibility due to the weather was a contributing factor.

De Blasio added that it "could have been a much worse incident."

"There were no other injuries that we know of at this point in time to anyone in the building or on the ground," he said: adding: "Thank God for that."

The city fire department said it had extinguished a fire on the building's roof - the height of which posed a challenge to firefighters.

"Whenever we have a fire on a high-rise office building - 54 stories is over 700 feet tall - we have challenges getting enough water pressure up to the higher levels of the building," Chief of Fire Operations Thomas Richardson was quoted as saying in a post on the New York fire department's Facebook page

'FELT IT THROUGH THE WHOLE BUILDING'

Nicolas Estevez was standing across the street from the building when a 30-centimetre piece of metal that appeared to be from the helicopter landed on the pavement just feet away.

The crash, which sent people streaming out of the building within seconds, reminded him of Sep 11, Estevez said.

"I saw the explosion and the smoke coming out," he said.

The Federal Aviation Administration said in a statement that the aircraft was an Agusta A109E, a twin-engine, lightweight helicopter. The pilot was the only person aboard, and FAA air traffic controllers did not handle the flight, according to the agency.

The chopper took off from a heliport on Manhattan's east side at 1.32pm and crash-landed on the building 11 minutes later, causing a fire that was quickly extinguished by responding firefighters, officials said.

The site is about half a mile from Trump Tower, where US President Donald Trump maintains an apartment. The area has been under a temporary flight restriction since his election in November 2016.

The pilot would have required permission from air control at La Guardia Airport in New York, and investigators are trying to determine if the pilot was in contact with the tower there or at any other airport, de Blasio said.

Nathan Hutton, who works in information technology for the French bank BNP Paribas on the 29th floor, said the building shook when the helicopter slammed into the roof.

"It felt like you were just standing there, and someone takes their hand and just shoves you," he said. "You felt it through the whole building."

Trump called New York Governor Andrew Cuomo, who was at the scene soon after the crash, to offer assistance if needed, the governor's office said.

"Phenomenal job by our GREAT First Responders who are currently on the scene," Trump said on Twitter after being briefed on the crash. "The Trump Administration stands ready should you need anything at all."

Cuomo told reporters shortly after the incident that there was no indication of terrorism, while acknowledging that it likely stirred memories of Sep 11 for many city residents.

The AXA Equitable Center was built in 1985 and includes more than 50 floors.

In addition to BNP Paribas, the building houses offices for a number of other corporate tenants, including law firms Willkie Farr & Gallagher and Sidley Austin and investment manager New Mountain Capital. Le Bernardin, one of New York City's most celebrated restaurants, is also located in the AXA building.

The skyscraper is managed by the Los Angeles-based CommonWealth Partners. Reached by telephone, LeAnn Holsapple, the office manager for CommonWealth, said the company had "no comment at this time."

Manhattan has three heliports in operation. Rooftop helipads were banned in New York City in 1977 after a rotor blade snapped on a helicopter on the top of the former Pan Am building, killing five people.

Helicopters are a regular sight in the air around Manhattan, and they have occasionally been involved in crashes.

Nearly a month ago, a chopper crashed into the Hudson River in New York City shortly after taking off from Manhattan, injuring two people. A sightseeing helicopter went down in New York City's East River in March 2018, killing five passengers.