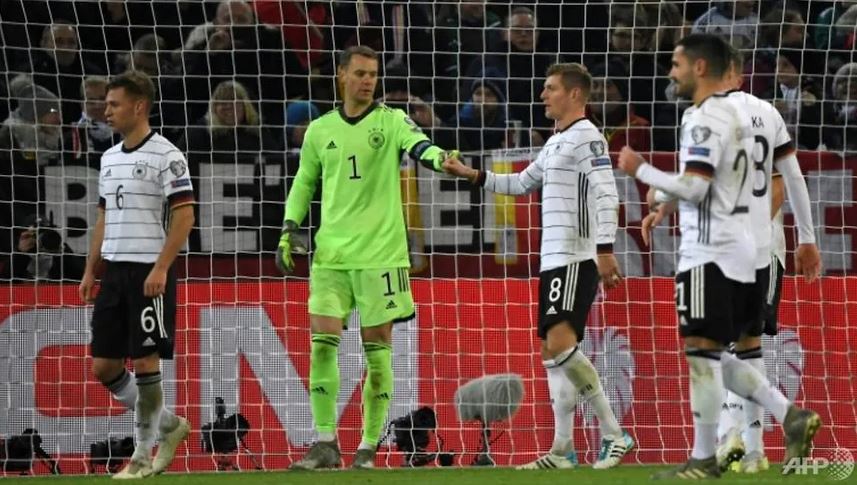 Germany goalkeeper Manuel Neuer (centre) pledged to make a donation to help with the coordination of the coronavirus response. AFP/INA FASSBENDER
BERLIN - AFP

German national team footballers said Wednesday they would donate 2.5 million euros (US$2.7 million) to help fight the crisis caused by the coronavirus pandemic.

"We need to look after each other in times like this. We in the national team have been thinking and we are going to donate to a good cause," said Germany captain Manuel Neuer in a video posted on Instagram.

The players did not specify what form the donation would take, but they directed their followers to the online platform "Wir Helfen", which aims to coordinate volunteers across Germany during the crisis.

"There was very quick agreement on the fact that we wanted to make a gesture as a team," said national team director Oliver Bierhoff at a German Football Association (DFB) press conference on Wednesday.

He said that Manchester City star Ilkay Gundogan, Real Madrid's Toni Kroos and Barcelona goalkeeper Marc-Andre ter Stegen were also among those who came up with the idea.

Meanwhile, national team coach Joachim Loew called for people to change their behaviour after the crisis.

"The world is experiencing a collective burnout" he said via video link from his home in Freiburg.

"The Earth seems to be defending itself against mankind, which always thinks it can do everything and knows everything," said Loew.

"Power, greed and profit have always been in the foreground (in recent years)," he added.

"But now we have something which affects all of us, and we realise what really matters in life: friends, family and respect for others."

"We need to show that we can be different ... and treat each other with more respect in the future."

Loew also welcomed UEFA's decision on Tuesday to postpone Euro 2020 until next year.

In light of the current situation, the decision had "no alternative", he said.

Both Bierhoff and Loew had offered to partially forego their salaries to help the association out during the crisis, DFB president Fritz Keller revealed.