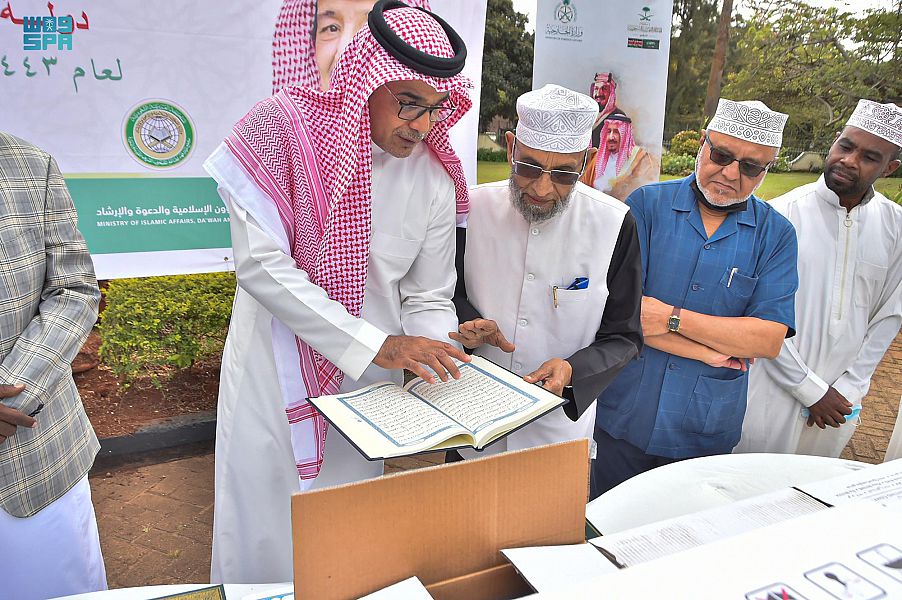 Deputizing for the Saudi Minister of Islamic Affairs, Call and Guidance,
Supervisor General of the King Fahd Complex for the Printing of the
Holy Quran, Sheikh Dr. Abdullatif bin Abdulaziz Al Al-Sheikh, the
Kingdom of Saudi Arabia’s Ambassador to Kenya, Khalid bin Abdullah
Al-Salman, has handed over the fifth batch of the gift of the Custodian
of the Two Holy Mosques, amounting to 32,700 copies and translations of
the Holy Quran, bringing the total of the handed over copies of the Holy
Quran to 73,050 copies.

The delivery ceremony took place in the presence of the President of
the Supreme Council of Kenyan Muslims, Hassan Ole Naado, and several
preachers and prominent Islamic and political figures.

The Ambassador stressed that the gift embodies the Kingdom’s message
in the service of Islam and Muslims in line with its message and
leadership in the Islamic world, highlighting the role being played by
the Ministry of Islamic Affairs, Call and Guidance in overseeing its
distribution to Muslims in the world to achieve the aspirations of the
leadership.