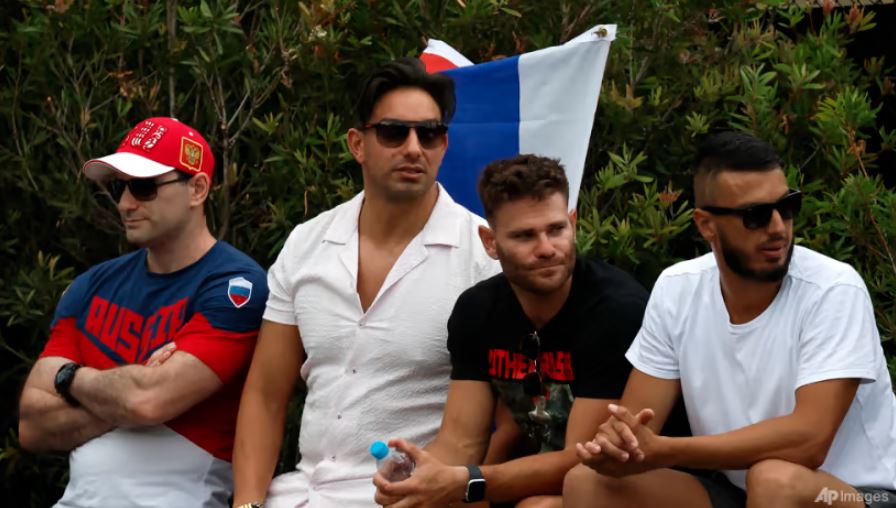 A Russian flag is seen during the Australian Open first round match between Kamilla Rakhimova of Russia and Kateryna Baindl of Ukraine in Melbourne on Jan 16, 2023. (Photo: AP/Asanka Brendon Ratnayake)
MELBOURNE - AFP

Tennis Australia on Tuesday (Jan 17) banned Russian and Belarusian flags at the Australian Open after Ukraine's ambassador demanded action when one was sighted among the crowd.

The red, white and blue stripes of Russia were seen on Monday during a first-round clash between Ukraine's Kateryna Baindl and Russia's Kamilla Rakhimova on day one.

"Flags from Russia and Belarus are banned onsite at the Australian Open," Tennis Australia said in a statement.

"Our initial policy was that fans could bring them in but could not use them to cause disruption. Yesterday, we had an incident where a flag was placed courtside.

"The ban is effective immediately. We will continue to work with the players and our fans to ensure the best possible environment to enjoy the tennis."

Since Russia invaded Ukraine, tennis players from the country have competed under a neutral flag, as is the case at the Australian Open.

"I strongly condemn the public display of the Russian flag during the game of the Ukrainian tennis player Kateryna Baindl at the Australian Open," he tweeted.

"I call on Tennis Australia to immediately enforce its 'neutral flag' policy."

Wimbledon went down that route last year, with players from Russia and Belarus barred, which led to the tournament being stripped of its ranking points by tennis' governing bodies.