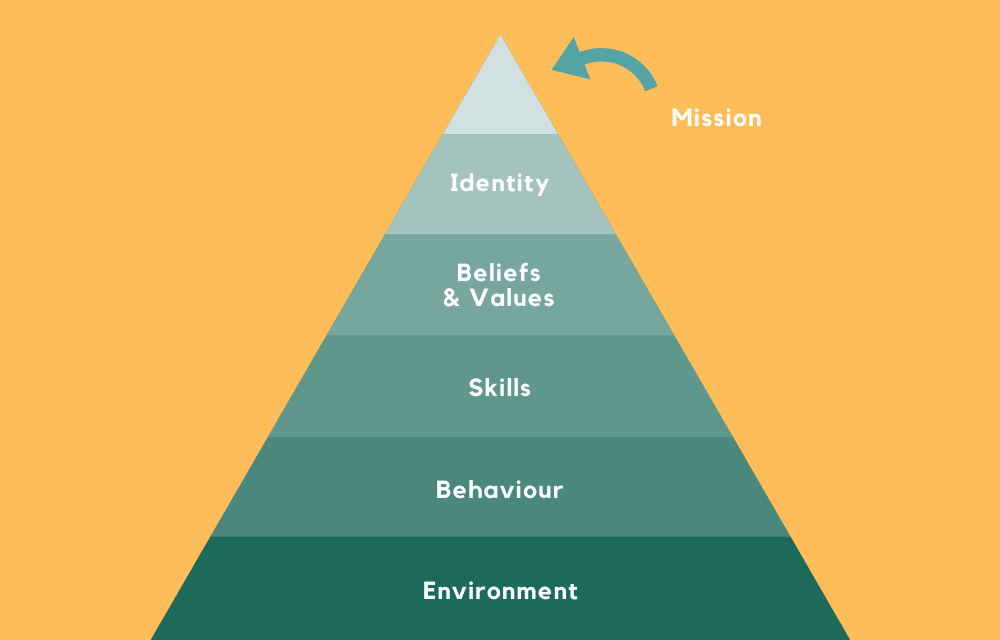 Gregory Bateson developed Logic Levels of learning. which based on Bertrand Russell’s earlier work in math and logic.

Six Logical Levels are represented as a hierarchy as below:

The environment refers to the external circumstances in which behaviors are expressed and in which humans are active. It’s particularly about the time and the geographical location where change has been established.

A person who acts from this level will probably explain the change by stating exactly what happened and who was involved. This explanation can be accompanied by complaining.

Behavior is about what people do and speak. If an onlooker were to observe another person, the behaviors are what the onlooker would see, feel, or hear when the observed person is carrying out an activity.

Behavior refers to action and reaction of a person in a particular environment. On this level, a person describes what he thought, did and what effect this action had in a certain situation.

Skills refer to the possibilities, competencies, qualities, and strategies that people can apply to engage in or initiate change.

These could be technical competencies in their field, but could also refer to ‘soft skills’ such as the ability to adapt to the new, changing situation. This is considered as the ‘how’ level. Competencies and skills guide behavior through a personal strategy.

If a person is convinced he’s bad at drawing, this could undermine attempts to learn how to draw. Convictions are about whether someone believes that something is possible, whether something is necessary or unnecessary, or whether motivation is stimulated.

Identity is about the question: ‘who are we?’. This enables people who are going through change to forge a shared identity. Conversations on this level are often regarding personal subjects. What do I like? What drives me? What’s my passion?

This level from the Logical Levels theory is about the deeper-rooted question: ‘what else are we here for?’ This level can also be called spirituality, referring to the larger system we might be a part of. This can give rise to many fundamental questions, particularly in young people.

For a coach / Trainer, familiarity with logic levels adds depth to their communication and learning styles, It also, adds precision and depth to both the communication style and the understanding of other people.