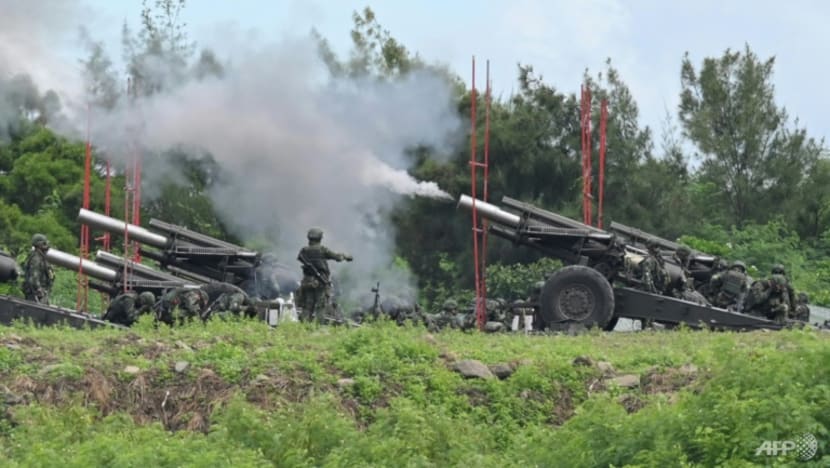 Taiwan's foreign ministry said on Thursday (Aug 11) that the island rejects the "one country, two systems" model proposed by Beijing in a white paper published this week.

Ou added that China was using US House Speaker Nancy Pelosi's visit to Taipei as an "excuse to create a new normality to intimidate Taiwan's people".

The island's army held another live-fire drill on Thursday, after Beijing ended its largest-ever military exercises around the island, as China repeated threats to bring the self-ruled democracy under its control.

Beijing has raged at a trip to Taiwan last week by US House Speaker Nancy Pelosi - the highest-ranking elected American official to visit in decades - staging days of air and sea drills around the island that raised tensions to their highest level in years.

Taiwan has accused China of using the Pelosi visit as an excuse to kickstart drills that would allow it to rehearse for an invasion.

The exercise in Taiwan's southernmost county of Pingtung began at 8.30am and lasted about an hour, he said.

Artillery tucked in from the coast was lined up side by side, with armed soldiers in units firing the howitzers out to sea one after the other, a livestream showed.

Taiwan held a similar drill on Tuesday in Pingtung. Both involved hundreds of troops, the military said.

The military has played down the exercises' significance, saying they were already scheduled and were not in response to China's war games.

"We have two goals for the drills, the first is to certify the proper condition of the artillery and their maintenance condition and the second is to confirm the results of last year," Lou said, referring to annual drills.

The latest exercise came after China's military indicated its own drills had come to an end on Wednesday, saying its forces "successfully completed various tasks" in the Taiwan Strait while vowing to continue patrolling its waters.

But in the same announcement, China added that it would "continue to carry out military training and prepare for war".

In a separate white paper published on Wednesday, China's Taiwan Affairs Office said Beijing would "not renounce the use of force" against its neighbour and reserved "the option of taking all necessary measures".

"We are ready to create vast space for peaceful reunification, but we will leave no room for separatist activities in any form," it said in the paper.

China last issued a white paper on Taiwan in 2000.

Taiwan's Mainland Affairs Council, the island's top policymaking body on China, rejected the paper and said the document was "full of lies that are 'wishful thinking and disregarding the facts'".

The Chinese Communist Party's Taiwan Affairs Office said in a statement on Thursday that Taipei's "rebellious actions are just a slap in the face and cannot stop the historical trend of reunification" with mainland China.

Pelosi has stood by her visit, saying Wednesday she was "very proud" of her delegation and believed China had used her visit as a "pretext" to launch its military exercises.

"We will not allow China to isolate Taiwan," Pelosi told reporters in Washington.

In response to the Chinese military revealing it was bringing drills to an end, Taiwan's army said it would "adjust how we deploy our forces ... without letting our guard down".

Relations between the two sides have significantly worsened since Tsai Ing-wen became Taiwan's president in 2016.

Tsai and her Democratic Progressive Party do not consider Taiwan a part of China.