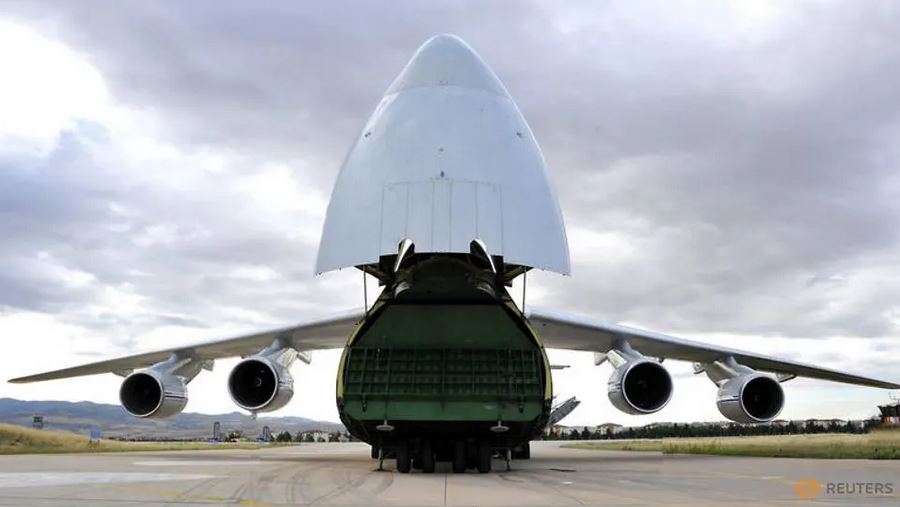 First parts of a Russian S-400 missile defense system are unloaded from a Russian plane at Murted Airport, known as Akinci Air Base, near Ankara, Turkey. (REUTERS)
ISTANBUL - Reuters

Turkish President Tayyip Erdogan said on Monday (Jul 15) that the Russian S-400 missile defence system, parts of which have been delivered to Turkey over the past four days, is expected to be fully deployed in April 2020.

Turkey's purchase of the Russian system has raised tensions with its NATO allies, particularly the United States, which has warned Turkey that it will respond with sanctions.

Speaking at Istanbul's Ataturk Airport on the third anniversary of the 2016 attempted coup, Erdogan said eight planes had already brought parts of the Russian system and more were coming, as he had repeatedly promised.

"With God's permission, they will have been installed in their sites by April 2020," he told the crowd.

"The S-400s are the strongest defence system against those who want to attack our country. God willing, we are doing this as a joint investment with Russia, and will continue to do so."

US officials have said that in addition to being hit with legislation aimed at preventing countries from purchasing military equipment from Russia, known as CAATSA, Turkey could be thrown off the F-35 stealth fighter jet programme.

That would mean it would no longer make F-35 parts or be able to buy the jets it has ordered.

On Sunday, Erdogan said that US President Donald Trump has the authority to waive sanctions on Turkey for its purchase of Russian air defence systems and should find a "middle ground" in the dispute.

Tensions between Turkey and Western allies have risen in recent months over the purchase of the S-400 system, with a series of other actions taken by the NATO member state compounding the situation.

German and Austrian ministers said on Monday that the European Union would endorse a symbolic punishment for Turkey over what it calls "illegal" drilling for oil and gas off Cyprus and threaten harsher sanctions unless Ankara changes tack.

Foreign Minister Mevlut Cavusoglu had said on Sunday that Turkey will continue drilling for gas in waters off Cyprus if the internationally recognised Greek Cypriot government does not accept a cooperation proposal put forward by Turkish Cypriots.

After sacking the central bank governor this month, citing differences over the timing of rate cuts, Erdogan said on Sunday that Turkey would make serious cuts to interest rates and aims to reduce inflation to single digits by the end of the year.

In his first remarks since taking office nine days ago, new governor Murat Uysal was reported as hinting at rate cuts, saying there was "room for manoeuvre" in monetary policy.

Turkey's benchmark interest rate was hiked to 24 per cent last September to stem a sharp fall in the lira and has remained there to prevent renewed losses in the currency as the economy tumbled into recession.

On Monday, agency S&P Global said Turkey's credit rating is only likely to be affected by US sanctions if they specifically target the country's banks.