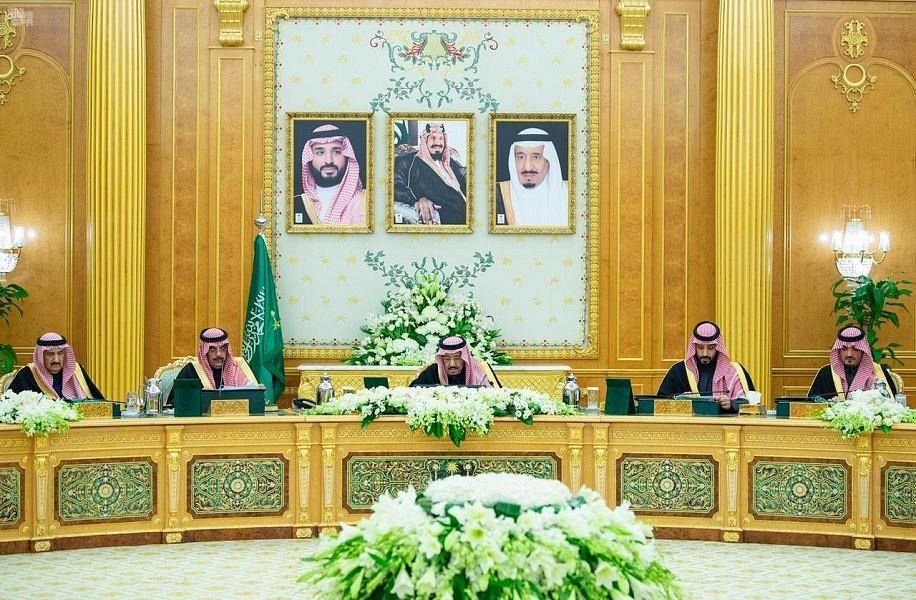 At the outset of the session, the Custodian of the Two Holy Mosques briefed the Cabinet on the contents of the two written messages sent to President Abdel Fattah El-Sisi of the Arab Republic of Egypt and Prime Minister of the Republic of Ethiopia Abiy Ahmed Ali, citing keenness to strengthen frameworks of strategic cooperation at various levels and to continue work and coordination towards regional and international issues. The King also briefed the Cabinet on the content of the telephone call with President Xi Jinping of the People's Republic of China, citing the Kingdom's stressing confidence in the Chinese government's ability to deal with Coronavirus, and the King's directives to provide assistance to China to contribute to overcoming this epidemic and containing its impacts.

The Cabinet affirmed that the directives of the Custodian of the Two Holy Mosques to provide assistance consisting of health and medical supplies to China to contain the spread and impact of the novel Coronavirus (nCoV), come within the framework of strong bilateral relations, the Kingdom's humanitarian role in supporting various countries to confront crises, through King Salman Humanitarian Aid and Relief Center (KSrelief), and the Kingdom's stand with affected peoples around the world.

The Minister of Media, Turki bin Abdullah Al-Shabanah, pointed out in a statement to the Saudi Press Agency after the session that the Cabinet reviewed the preparatory meeting for the 11th Clean Energy Ministerial and fifth Mission Innovation Ministerial (CEM11/MI-5) organized by the Ministry of Energy in Riyadh, on the sidelines of the Kingdom's hosting the 2020 G20, with the participation of 24 countries and the European Union. The Cabinet reviewed the topics discussed during the meeting including energy and accelerating innovation in their technologies to reach goals of sustainable development and climate change and ways to increase investments in research and development fields.

The Cabinet reviewed the Kingdom's hosting and presidency of the 39th session of the Arab Women Committee within the framework of its efforts to serve Arab issues, advance and support the status of women, their march through social and economic empowerment and their contributions to sustainable development in accordance with Kingdom's Vision 2030. The Cabinet welcomed announcing Riyadh as the Capital of Arab Women 2020, constituting a regional dimension of the Kingdom's participation with the international community in this field and at all levels.

The Minister of Media stated that the Cabinet reviewed latest developments at regional and international arenas stressing the Kingdom’s firm stances towards achieving global security and stability, its affirmation during its participation in the Nuclear Security Conference in Vienna, its support for international decisions in this field and verification of human and environmental protection, and its concern that nuclear security be one of the main components of the infrastructure of its national project for the peaceful uses of atomic energy. This represents the Kingdom's call on the international community to reinforce all measures aimed at combating nuclear terrorism and give it more international attention in light of region's tensions and the proliferation of terrorist groups and militias.

The Cabinet reviewed the preparations for the forty-seventh session of the Council of Foreign Ministers of the Organization of Islamic Cooperation (OIC), in appreciation for what the Kingdom provides as the headquarters state and the president of the fourteenth Islamic Summit, in addition to its continuous support for OIC initiatives upon the directives of the Custodian of the Two Holy Mosques and HRH Crown Prince. This is what the organization embodies as the voice of the Islamic world and as a pioneering role in building bonds of solidarity between Islamic countries and peoples, defending the tolerant image of Islam and confronting hate speech and all forms of extremism and terrorism.

The Cabinet approved the Kingdom of Saudi Arabia's accession to the Framework Agreement for the Establishment of the International Solar Energy Alliance.

A royal decree has been prepared.

The Cabinet authorized the Minister of Interior or his deputy to negotiate with the Afghan side a draft of security cooperation agreement between the government of the Kingdom of Saudi Arabia and the government of the Republic of Afghanistan, sign it, and submit the final signed version, to complete formal procedures.

The Cabinet approved a memorandum of understanding for cooperation in the field of tourism between Saudi Commission for Tourism and National Heritage in the Kingdom of Saudi Arabia and the Ministry of Culture, Sports and Tourism of the Republic of Korea.

A royal decree has been prepared, in this regard.

The Cabinet approved rainmaking program in the Kingdom of Saudi Arabia.

The Cabinet approved a number of promotions as follows:

3- Khalid bin Abdulaziz bin Abdullah Al-Othman is promoted to the post of Chief Clerk (14th Rank) at the Supreme Court.

4- Mohammed bin Saud bin Mohammed Al-Tamimi is promoted to the post of Customs Consultant (14th Rank) at the General Authority of Customs.

The Cabinet reviewed a number of general topics on its agenda including annual reports of the Ministry of Education and the General Intelligence Presidency for a previous fiscal year and made appropriate recommendations in their regard.