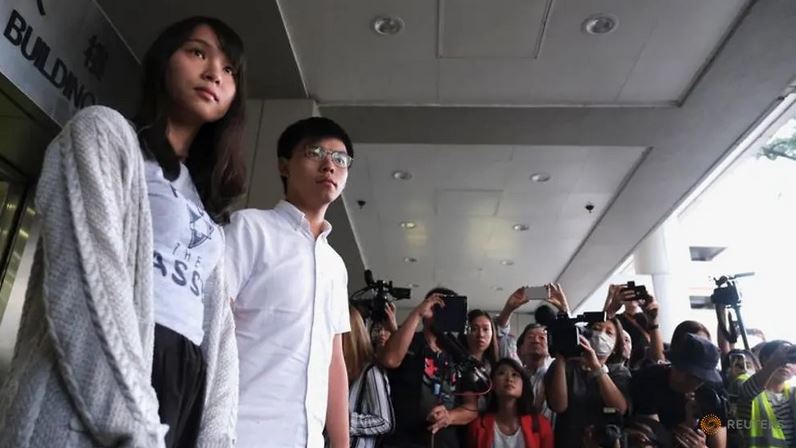 Joshua Wong, 24, one of Hong Kong's most prominent anti-government activists, was jailed on Wednesday (Dec 2) for a total of 13 and a half months for his role in an unlawful rally at anti-government protests last year, ramping up pressure on opposition figures in the Chinese-ruled city.

Wong's sentence comes as critics of the Beijing-backed government say it is intensifying a crackdown on Hong Kong's opposition and wide-ranging freedoms guaranteed after the former British colony returned to Chinese rule in 1997, a charge authorities in Beijing and Hong Kong reject.

Wong had pleaded guilty to organising and inciting an unlawful assembly near the city police headquarters during the height of the sometimes violent demonstrations in June last year and faced a maximum of three years in jail.

About 100 supporters gathered quietly inside the court ahead of the sentence, while a small group of pro-Beijing people rallied outside, calling for a hefty prison sentence.

"I know the coming days will be tougher, we will hang in there," Wong shouted after the sentence was read out.

Wong's long-time colleagues Agnes Chow, 23, and Ivan Lam, 26, were jailed for a total of 10 and seven months, respectively, on charges linked to the same siege.

Under Hong Kong's handover agreement in 1997, Beijing promised to maintain the city's way of life for 50 years under a "one country, two systems" formula, although some fear 2047 is arriving early as authorities tighten their grip.

US Senator Marsha Blackburn accused China of cracking down on human rights and destroying "any semblance of autonomy in Hong Kong."

"Keep the faith, Joshua, you are truly an inspiration to freedom fighters everywhere," Blackburn said in a statement.

A familiar face at anti-government protests since he was a teenager, Wong was less than a year old when Hong Kong returned to Beijing 23 years ago with a guarantee of freedoms not enjoyed on the mainland, including freedom of speech and assembly.

Democracy activists say Beijing is rapidly chipping away at those freedoms, with the imposition of a national security law on Jun 30 seen as the latest blow to the city's liberties, which are crucial for its status as a global financial hub.

Authorities in Beijing and Hong Kong deny curbing rights and say the law is vital to plug gaping holes in national security defences exposed by the unrest last year that posed the biggest popular challenge to Chinese President Xi Jinping.