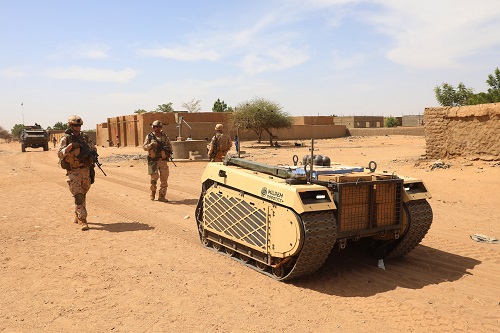 Milrem Robotics, one of the leading manufacturers of unmanned ground vehicles (UGV) introduces at UMEX 2020 its mission proven, fifth generation THeMIS UGV designed to assist soldiers on the battlefield while enhancing their combat effectiveness.

The THeMIS UGV has been especially designed to withstand harsh environments and hot climates. It has proven itself in Mali, Africa where it has been deployed since early 2019 during the French lead anti-insurgent operation Barkhane. The vehicle has driven more than 1000 km during various missions in one of the toughest regions in the world with lava rock soil, loose sand and high temperatures reaching 50° C in the shade.

“We are pleased to be back in Abu Dhabi, where just a few years ago we tested the prototype of our unmanned vehicle for durability in hot conditions. Today we are presenting a mature and robust product that has proven itself in extreme hot climates and, as our clients have already determined, will greatly enhance warfighting capabilities,” stated Kuldar Väärsi, CEO of Milrem Robotics.

The THeMIS UGV is in serial production and has already been delivered to France, US, UK, Netherlands and Norway in logistics configuration intended to provide combat support and carry supplies with an option to integrate additional kinetic or non-kinetic payloads.

This tracked multipurpose UGV can be equipped with remote weapon systems, tethered drones, C-IED solutions and ISR sensors. With the possibility to mount various payloads the UGV acts as a force multiplier.

“The THeMIS has become the industry standard UGV sought out for various payload integration projects. Together with partners like Kongsberg, FN Herstal, MBDA, ST Engineering and EOS more than a dozen different systems have already been integrated,” Väärsi stated. Live firing tests have been conducted with five different weapon systems, including the JAVELIN anti-tank missile system.

In addition, the UGV has been equipped with autonomous functions including point-to-point navigation, obstacle detection and avoidance, enabling it to follow dismounted troops, patrol a perimeter, provide front line resupply and evacuate casualties with minimal intervention by the operator.