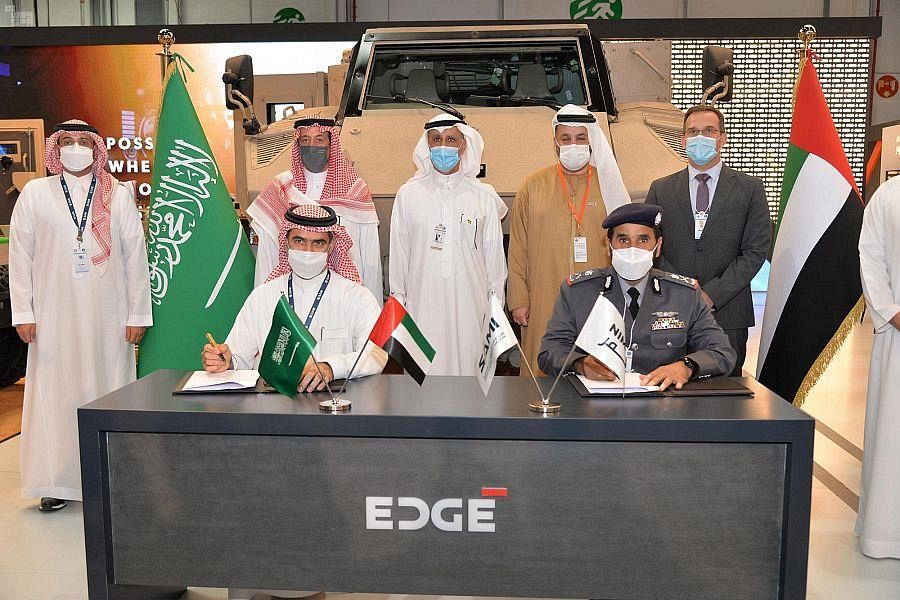 Saudi Arabian Military Industries (SAMI), a wholly owned subsidiary of the Public Investment Fund (PIF), signed today a teaming agreement with NIMR, a United Arab Emirates (UAE)-based leading manufacturer of combat-proven light- and medium-weight wheeled military vehicles, to supply armored vehicles to the Kingdom of Saudi Arabia.
The agreement was signed at IDEX 2021 in Abu Dhabi by Chairman of the NIMR Board Staff Major General Pilot Faris Khalaf Al-Mazrouei and CEO of SAMI Eng. Walid Abukhaled, in the presence of Governor of the General Authorities for Military Industries (GAMI) Eng. Ahmed A. Al-Ohali, Saudi Ambassador to the UAE Turki bin Abdullah Al-Dakhil, CEO and Managing Director of EDGE Faisal Al-Bannai and other leading representatives of the two entities.
Under the agreement, SAMI will work exclusively with NIMR, the original equipment manufacturer (OEM) of JAIS 4x4 MRAP (Mine-Resistant Ambush Protected) vehicles, to produce the armored vehicles locally in the Kingdom of Saudi Arabia. Although completely built units will initially be produced in the UAE by NIMR, the agreement stipulates the transfer of production and technology to the Kingdom of Saudi Arabia and develop its supply chain capabilities to enable the two companies to jointly manufacture all the JAIS vehicles that will be provided to the Kingdom of Saudi Arabia in the future.
CEO of SAMI Eng. Walid Abukhaled said: “With a strong emphasis on the transfer of technology and the creation of employment opportunities for Saudi talents in SAMI’s industry partnerships, we have been working towards contributing to the Saudi Vision 2030 objective of localizing over 50 percent of the military equipment spending by 2030. The new agreement with NIMR represents a major leap forward in our efforts to build a flourishing military industries sector in the Kingdom of Saudi Arabia. This achievement also supports PIF’s efforts through SAMI in localizing cutting-edge technology and knowledge, as well as building strategic economic partnerships. We are pleased that the first of its kind partnership between the two companies marks the beginning of a new era of collaboration in the military sector between the Kingdom of Saudi Arabia and the UAE".
For his part, CEO and Managing Director of EDGE Faisal Al-Bannai said: “Fostering strategic relationships is a key pillar of EDGE’s strategy, and we look forward to building on this commitment with our colleagues at SAMI. This agreement represents the first military collaboration between the Kingdom of Saudi Arabia and the UAE and it is a major step in boosting the robust relations between the two countries”.
This agreement is considered as the first agreement between Saudi and Emirati companies to cooperate in the Kingdom of Saudi Arabia’s military industries sector. With the new collaboration, SAMI will be able to provide the Saudi military forces with a state-of-the-art armored vehicle that has been thoroughly tested and evaluated by military experts in the Kingdom of Saudi Arabia. This will also lead to the creation of new jobs and the transfer of several new technologies in line with the Saudi Vision 2030 objectives in this sector.
The JAIS Family of Vehicles brings together forty years of experience in protected optimized mobility. JAIS is the next generation of MRAP vehicles, providing essential balance between firepower and survivability, but with mobility for modern, conventional and asymmetric operations. Crew survivability is centered around a battle-proven ‘crew citadel’ protection system, protecting against mines, IEDs, and ballistic threats. The JAIS vehicle architecture supports multiple mission variants and equipment options, such as a full motorized infantry section, with a manned turret or remote weapon system.