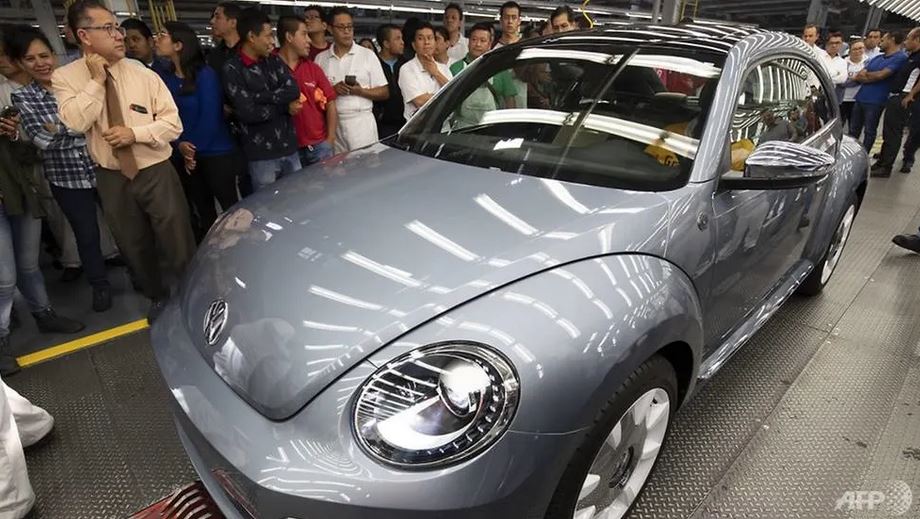 A Volkswagen Beetle, the final edition of the iconic car, is pictured inside the factory in Puebla, Puebla State, Mexico. (AFP/JUAN CARLOS SANCHEZ)
PUEBLA, Mexico - AFP

German auto giant Volkswagen launched the final edition of its iconic Beetle car from its Mexican factory on Wednesday (Jul 10) at a ceremony accompanied by a Mariachi band.

The bug-shaped sedan rolled off the production line to rapturous applause, the last iteration of a model first manufactured in the late 1930s in Germany and 1954 in Puebla, central Mexico. 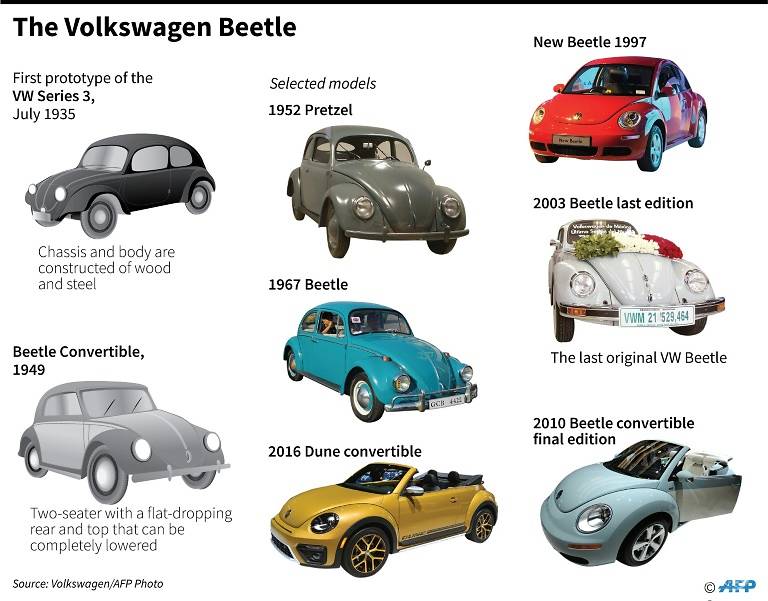 "The loss of the Beetle after three generations and almost seven decades should provoke a wide variety of emotions," said Steffen Reiche, the CEO of Volkswagen Mexico.

The limited, 65-unit run of the Beetle Final Edition will be sold in Mexico on the internet for a base price of US$21,000 per vehicle, and can be reserved with a US$1,000 payment.

Each car includes a commemorative plaque on its left side, numbered from one to 65.

It will be available in metallic blue, black, white and beige.

Dozens of factory workers had turned up from early morning to put the final touches on the car, which was unveiled after seven hours of work.

The employees wore bright yellow tops bearing the words: Thanks Beetle, as the unveiling proceeded in a festive atmosphere tinged with nostalgia for a car that has generated a loyal following like almost no other.

"Who couldn't want a car like this, made with Mexican hands?" said Roberto Benitez, a 40-year-old production technician.

"It's always sad, you feel like part of one. That's the daily work, full shifts to get the best results, it makes me proud," added Francisco Bueno, a 25-year-old employee.

The production of the final Beetle model was announced last September by Volkswagen, still trying to turn the page after the costly 2015 "dieselgate" scandal in which it paid out huge government settlements after rigging 11 million cars to cheat regulatory emissions tests.

The vehicle's history goes back to the Nazi era, having first been developed by Ferdinand Porsche with support from Adolf Hitler, who in 1937 formed the state-run Volkswagenwerk, or "The People's Car Company."

After the war, the Allied countries made Volkswagen a priority in an effort to revive the German auto industry.

The advertising agency Doyle Dane Bernbach in 1959 rechristened the car the Beetle, and began touting its small size as an advantage to consumers, according to the History Channel.

The car attained further popularity with the 1968 Disney movie The Love Bug, the story of a racing Volkswagen with a mind of its own.

Andy Warhol did prints featuring the car while a Beetle featured prominently on the cover of Abbey Road, the final studio album by the Beatles.

The current New Beetle model, first launched in 1997, is a far cry from the original that ceased production in 2003, but it retains the distinctive bug-shape and large headlights that appear like eyes on a smiling face.

Robust, easy to maintain and high-performance, it reached its apogee in the 1960s and 70s before its popularity waned and Volkswagen ceased European production in 1978.

Eventually its high fuel usage, weak brakes and poor handling led to it being overtaken by the competition, not least VW's own Golf model.