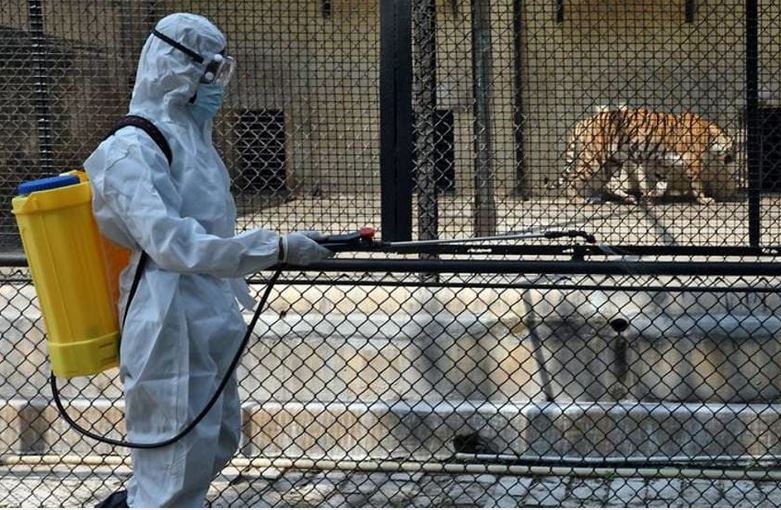 A man in a protective suit sprays disinfectant in a tiger enclosure at Alipore zoo amid concerns about the spread of coronavirus disease (COVID-19), in Kolkata, India, April 7, 2020. REUTERS/Rupak De Chowdhuri
NEW DELHI - AFP

Keepers at a major western India zoo are putting their big cats into solitary confinement after a tiger in the United States caught the novel coronavirus.

"We have decided to isolate them to avoid any kind of infection," said superintendent Bharatsinh Vihol of the Kamala Nehru Zoological Garden in Gujarat state.

"Also, since we have run a planned breeding programme here, it has been decided to restrict mating between the pairs," he told AFP.

Doctors are regularly inspecting the lions, tigers and leopards at the facility, looking for breathing issues, runny noses and coughing.

Zookeepers tending to the animals wear masks and gloves and are screened for fever.

"We have been sanitising the outer walls of the zoo on a daily basis, while individual enclosures are being sanitised every alternate day," Vihol added.

The zoo usually attracts 2 million visitors a year but is closed under India's nationwide lockdown, which allows residents to leave their homes only for essential services.

A tiger at New York's Bronx Zoo tested positive for COVID-19 a week ago.

It is believed it contracted the virus from a caretaker who was asymptomatic at the time.