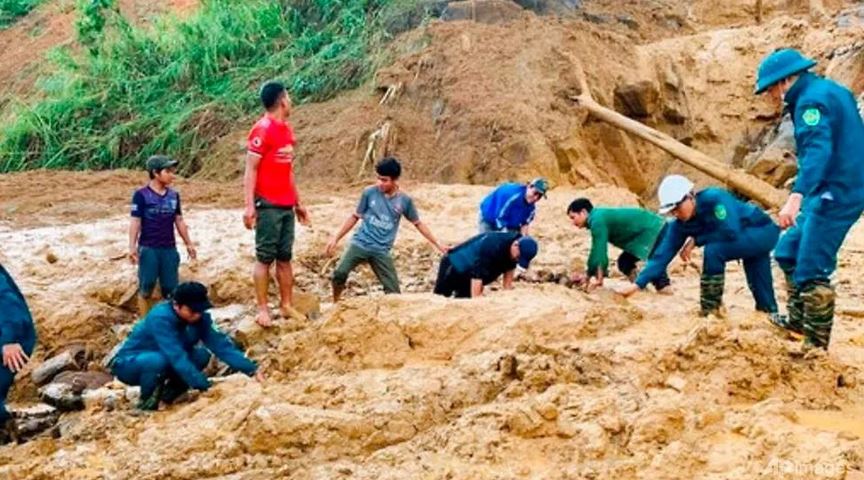 Typhoon Molave set off landslides that killed at least 19 people and left 45 missing in central Vietnam, where ferocious wind and rain blew away roofs and knocked out power in a region of 1.7 million residents, state media said on Thursday (Oct 29).

The casualties from the landslides bring the overall death toll from the storm to at least 35, including 12 fishermen whose boats sank on Wednesday as the typhoon approached with winds of up to 150kmh.

Vietnamese officials say it’s the worst typhoon to hit the country in 20 years.

At least 59 people remain missing in the landslides and at sea.

The toll may rise with many regions still unable to report details of the devastation amid the stormy weather. 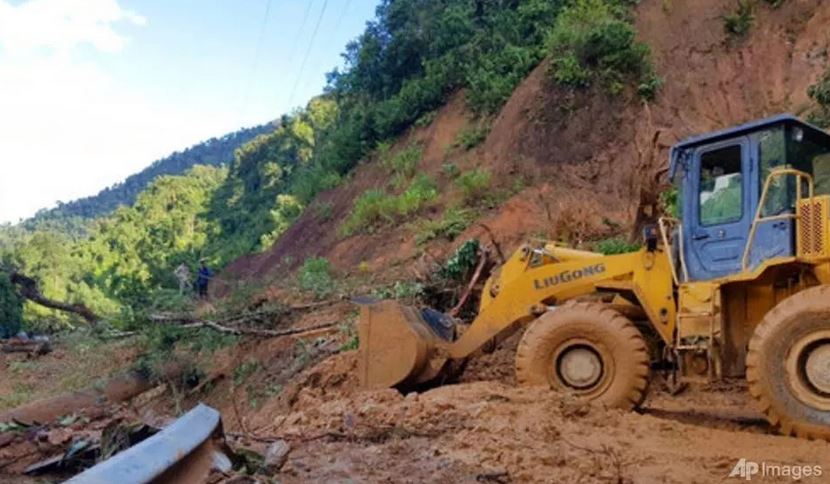 A bulldozer clears out a road damaged by a landslide to access a village swamped by another landslide in Quang Nam province, Vietnam, on Thursday, Oct 29, 2020. Typhoon Molave slammed into Vietnam with destructive force on Wednesday, sinking two fishing boats with 26 crew members in what was feared to be the most powerful storm to hit the country in 20 years. (Photo: AP/Bui Van Lanh, VNA)

Rescuers dug up eight bodies on Thursday morning in Tra Van village in south-central Quang Nam province where a hillside collapsed on houses.

The victims had taken shelter in the community as the typhoon approached, the official Vietnam News Agency reported.

In Tra Leng village, about 45km from Tra Van, another landslide buried a community with several houses occupied by about 45 people. Four managed to escape.

Rescuers have recovered eight bodies and were scrambling to save 37 others, Vietnam News said.

Tra Leng remains inaccessible due to damaged roads and other landslides, and government disaster-response teams were using bulldozers and excavators to open up a road to bring in more rescuers and heavy equipment.

Deputy Prime Minister Trinh Dinh Dung travelled to the site where soldiers were clearing up a landslide with bulldozers and ordered officers to urgently bring in troops to the landslide-hit village.

“We must reach the landslide site the fastest way. First, send in more soldiers before we can get the big machine there. We have to reach the area by all means, including by using helicopters,” he said.

As troops scrambled to rescue those buried alive in Tra Leng, another part of a rain-soaked mountainside cascaded down in a torrent of mud in nearby Phuoc Loc district on Thursday morning, trapping 11 people.

Other villagers in Phuoc Loc were advised to flee to safety given the unstable mountain slope.

The three landslide-hit areas lie in the mountains of the hard-hit province of Quang Nam in a coastal region still recovering from floods that killed 136 people and destroyed hundreds of houses earlier this month.

Four people were killed by falling trees and collapsed houses in Quang Nam and Gia Lai provinces when the typhoon slammed into the coast on Wednesday.

Navy search and rescue boats found the bodies of 12 of 26 fishermen whose boats sank on Wednesday off Binh Dinh province, state media said.

The typhoon blew off roofs of about 56,000 houses and caused a massive blackout in Quang Ngai province, where 1.7 million people endured the typhoon onslaught overnight in darkness, according to Vietnam News.

At least 40,000 people were evacuated to emergency shelters and authorities shut down offices, factories and schools to prevent casualties.

The typhoon left at least 16 people dead in the Philippines before blowing across the South China Sea toward Vietnam.