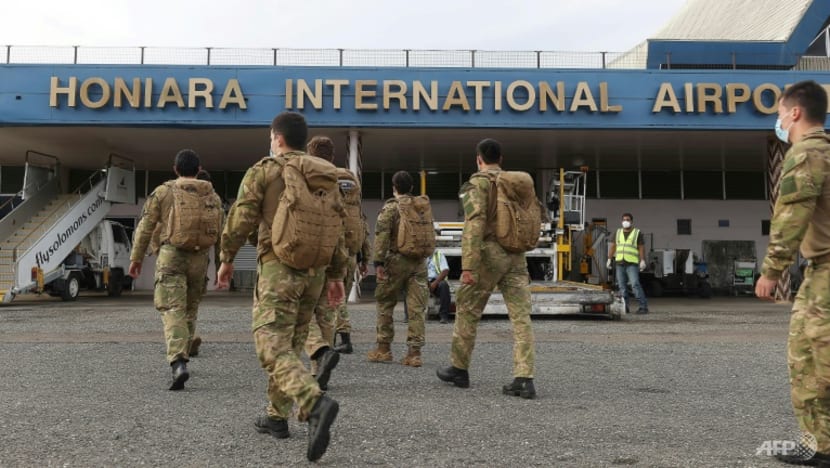 Armed troops and police operated checkpoints around parliament and sealed off streets in downtown Honiara, as the opposition put forward a motion to oust Sogavare, accusing him of corruption and of using Chinese funds to prop up his government.

"This is a prime minister who has willingly compromised our sovereignty for his personal political benefit," opposition leader Matthew Wale told lawmakers, as debate on the motion got under way.

Police imposed a liquor ban in Honiara, hoping to avoid a repeat of the deadly riots that erupted less than two weeks ago, when mobs ran amok in a three-day rampage calling for Sogavare's removal.

Large numbers of people were seen leaving the capital for the provinces on chartered ferries Sunday ahead of the no-confidence vote, expecting further trouble.

Shipping containers blocked access to some downtown areas after much of the Chinatown district was left in smouldering ruins during the riots late last month that claimed at least three lives.

The prospect of further violence prompted the US consulate in Honiara to restrict operations, while peacekeepers from Australia, New Zealand, Fiji and Papua New Guinea patrolled the capital's streets.

The crisis erupted last week when protests over Sogavare's policies turned violent, fuelled by poverty, unemployment and interisland rivalries in the nation of 800,000.

The Central Bank of the Solomon Islands on Monday put the damage caused by the riots at US$67 million, more than double its previous estimate, saying 63 buildings in the capital were burned and looted.

It said the unrest would cost about 1,000 jobs and stifle economic growth, warning the country was experiencing "development in reverse".

Wale accused Sogavare of using Chinese funds to prop up his government, saying "foreign cronies" were being allowed to strip the country's natural assets.

"How is he supposed to make decisions wholly in the interests of the Solomon Islands, untainted by considerations for the PRC (People's Republic of China)?" he said.

Wale rejected allegations from Sogavare that he conspired with anti-Beijing foreign powers to spark the riots, saying it was the prime minister who answered to offshore logging and mining companies.

The opposition leader condemned last month's rioting, but added "it pales in comparison to the looting happening at the top at the expense of ordinary Solomon Islanders".

Sogavare, 66, is serving his fourth stint as Solomons' prime minister, and has been toppled by no-confidence votes twice before.

Wale claimed that Beijing was funnelling payments to secure support for Sogavare ahead of the no-confidence vote.

Solomon Islands lawmaker Silas Tausinga said he and other colleagues had been offered around US$30,000 from a Beijing-bankrolled electoral fund if they voted to keep the prime minister in power, The Australian newspaper reported.

Sogavare was instrumental in switching the Solomons' diplomatic allegiance from Taiwan to China in 2019.