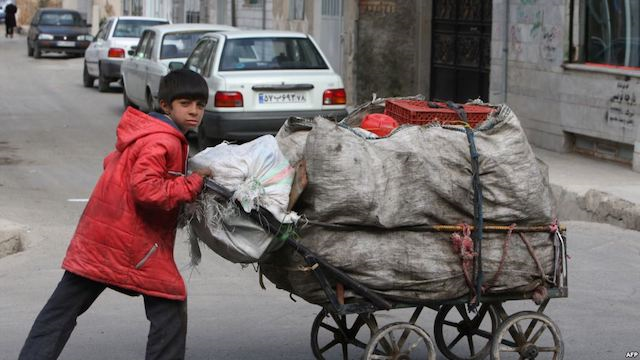 International day of children's right &The Working Children in Iran

20 November is Children’s Rights Day, first established in 1989 with the unanimous adoption of the International Convention on the Rights of the Child by the United Nations General Assembly.

Today, many children in Iran are forced to drop out of school, due to poverty and the economic crisis, and enter the labor market for their own or their family’s survival. These children are subjected to violence and abuse. This approach is a serious violation of international children’s rights. More than 5% of construction work in Iran, being one of the most difficult tasks, is done by working children.

The employment of low wage working children in the markets is very profitable for owners. For this reason, government institutions in charge in Iran are not only reluctant to solve this problem, but also are the main culprits.

According to the Mehr news agency, based on research conducted by the University of Welfare Sciences. The number of working and street children in Iranian cities is approximately 70,000.

In any city of Iran, you can see them walking in the streets with a bag on their shoulders. They go everywhere looking for waste, plastic bottles, and discarded items for recycling. They search for garbage bins, rubble, depots, wherever they could find these materials. What stands out is that unequal to the heavyweight on their shoulders, they are often very young children.

A local reporter, reporting from across the city, said, “I came across a number of these kids searching the garbage bins with a big bag.  I went ahead and opened the conversation and asked them about their lives and jobs.”

Vahid is the youngest of them all, but at his young age, he works more than the others. He says, “Including my parents, there are 14 of us and I am the eldest son in the family. My father is old and missing a kidney, so he cannot work”.

When asked, “How many hours a day do you work and how much do you earn?”

Vahid replied, “I leave the house at seven in the morning and return to sleep at night. I collect 30 to 40 kilograms of recyclable waste a day and sell it to a specific person in a garage. He buys them for 1500 tomans (equivalent to 10 cents) per kilogram”.

For another question, “Is this income enough for a family of 14 to meet its ends or not?”

He replied, “I do not know. Every month I go and give the money to my mother and I go back to the garage. I do not know if it is enough for them or not. I cannot make more unless I buy a cart. We came here from Mashhad (northeast of Iran). My family lives in Mallard (a suburb of Tehran), but I live in the garage to be close to the garbage dump. I finished my second year of primary school and have not returned to school since my arrival here. I have a seven-year-old brother who should have gone to school this year but could not. They said he must have a cell phone, which we do not have!” 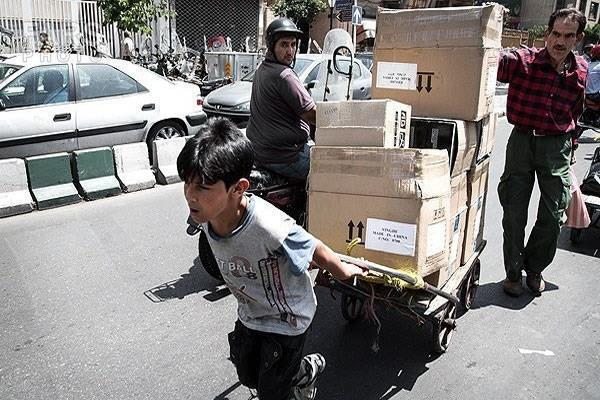 17-year-old Hadi talks about his living place, “This is one of the master’s garages. He has three garages in Karaj, and everyone works for him. Meshkin Dasht Garage is around Ebrahimabad Park. There are about 20 of us staying there overnight. The whole garage has been turned into a living room. Several families also live there and pay rent to master”.

Hadi is illiterate and has never gone to school. He has rough workers’ hands and speaks loudly. He says, “We also came here from Mashhad. My father died and I have six sisters who are too young to work. My mother works in a clothing factory and she sleeps there at night with my sisters. In fact, they are also night guards. I work so they can study”.

I was curious about the master and asked them to tell me more about him. Hadi says, “From the beginning, everyone called him master (Arbab). We also call him master. We sell the things we collect to him and he pays us money every day. So far, I have worked for several people and they did not pay me, but the master pays every day”.

I asked them what the master was doing with the junk collected? Hadi continues, “He has a contract with the municipality. This is his area, and we are just allowed to work in his area. If we are outside this area, municipal officials will come and take us away”.

Vahid says, “Master has three garages, and he rides a high-end car. He has a lot of workers and he is rich”.

Hadi and Vahid, despite their young age, suffered as much as an adult. I realized this when I asked Vahid, “Do you not have an older brother?” A bitter laugh settled on the corner of his mouth and he said, “If I had, I would not have had to work like this”. This means that he accepted he is the head of a family and he must suffer and provide for them. These are not the imaginary stories of a thousand and one nights, these are not myths out of reach!

The common denominator of these children’s stories is poverty and unemployment. These factors weigh so heavily on their shoulders and are so harmful that they do not allow them to get out of the current situation.

Vahid and Hadi never spend time for themselves. At the height of adolescence, at their sensitive age period, at times when they need attention, fun and happiness, they work just to keep their families surviving. The days that must be spent building and developing the character of Vahid and Hadi are spent diving dumpsters.