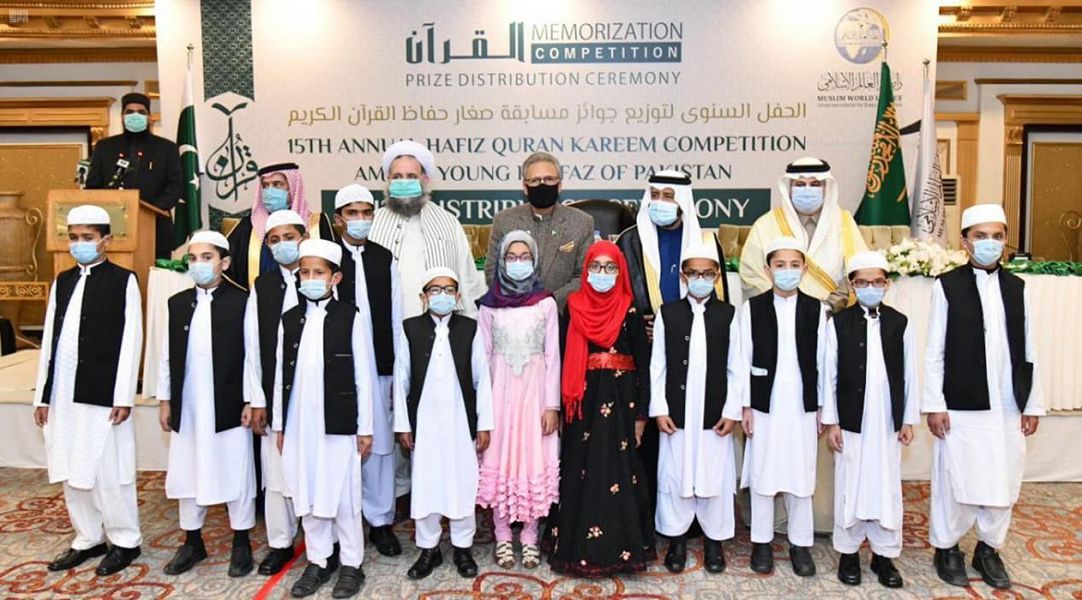 The Muslim World League honored the winners of the annual competition for the Young Memorizers of the Holy Qur'an in the Islamic Republic of Pakistan by offering in-kind and financial prizes.

This came during a ceremony held today by the regional office of the Muslim World League in Islamabad, under the patronage of His Excellency Dr. Arif-ur-Rehman Alvi, President of Pakistan, and in the presence of His Excellency the Pakistani Minister of Religious Affairs Noor Al-Haq Qadri, His Excellency the Assistant Secretary of the Muslim World League, Dr. Abdulrahman bin Abdullah Al-Zaid, in addition to Ambassador of the Custodian of the Two Holy Mosques in Pakistan, Nawaf bin Saeed Al-Maliki, and the Regional Director of the MWL's office in Pakistan, Saad bin Masoud Al-Harithi.

His Excellency the Pakistani President congratulated the winners, expressing his appreciation for the MWL's great efforts in various fields, including support for competitions for memorizing the Noble Qur'an.

His Excellency also valued the efforts made by the Kingdom of Saudi Arabia to serve Islam and Muslims, take care of the Two Holy Mosques and take care of Hajj and Umrah pilgrims, stressing that his country attaches great importance to its relations with the Kingdom, and considers them ancient relations based on common religious and cultural commonalities, and are characterized by love and brotherhood between the peoples of the two countries.