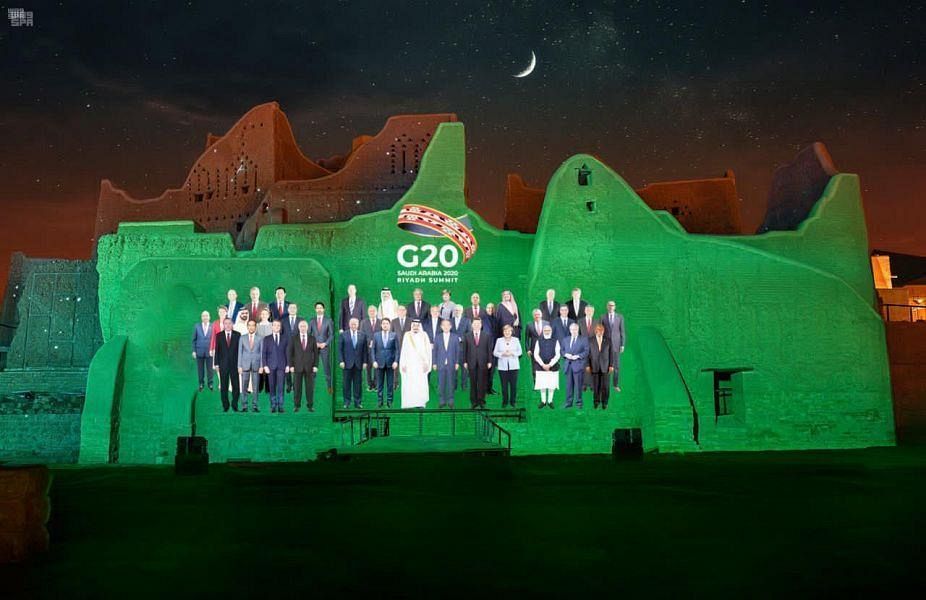 Saudi Arabia to Play Host to G20 Leaders' Summit, in Riyadh, on Saturday

Under the chairmanship of the Custodian of the Two Holy Mosques King Salman bin Abdulaziz Al Saud, the Kingdom of Saudi Arabia is set to play host, to the workings of the 15th session's meetings of the G20 leaders' summit, to be virtually held here, on Saturday.

Riyadh summit will be virtually held, in the light of the world circumstances related to the COVID-19 pandemic.

Through presiding over the G20 summit, the Kingdom anticipates to consolidate cooperation with member states partners to realize the objectives of the G20. finding world-wide concert over economic topics, on the agenda, aiming at cementing world economy's stability and flourishing.

Hosting the summit, would also contributes in presenting issues of interest to the Middle East and North Africa (MENA) region.

2-day Riyadh-host G20 summit on 21-22 November, is a historical event, as it is the first of its kind, at the level of the Arab world, reflecting the pivotal role played by the Kingdom, on the regional and international stages.

G20 leaders are set to take part in the summit, as it faces the most challenging issues of the world economy, as well as a number of other countries invited to take part, too, in the workings of the summit, in addition to various regional and international organizations.

The summit targets promoting effective policies to realize balanced and sustainable development, lay ground for creating real jobs to raise the standards of living and prosperity, among the world peoples.

Riyadh, the Saudi capital, has already turned into a workshop for preparatory encounters, over the last period of time, at ministerial level, in addition to other working groups meetings, witnessing participation of senior officials from the G20 member states and representatives of international agencies, private sector and civic society institutions, for certain sectors' issues to be discussed, during the summit.