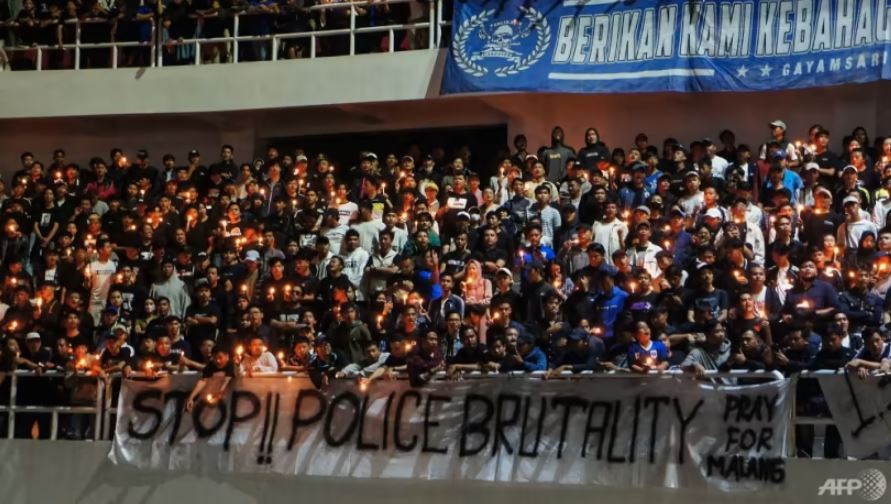 This picture taken in Semarang on Oct 2, 2022 shows football supporters attending a candlelight vigil for victims of a stampede at Kanjuruhan stadium in the city of Malang.. DAFFA RAMYA KANZUDDIN / AFP
SURABAYA, Indonesia - AFP

Five Indonesian men charged with negligence leading to one of the worst stadium disasters in football history appeared in court by video link on Monday (Jan 16) as their trial began.

The stampede in October in the East Java city of Malang - which killed 135 people, including more than 40 children - came after police fired tear gas into packed stands when supporters invaded the pitch at the end of a match between rivals Arema FC and Persebaya Surabaya.

Hundreds of people fled for narrow exits, resulting in a crush that left many trampled or suffocated to death.

Three local police officials, a match organiser and a security official were all charged with negligence for their role in the disaster.

The suspects face a maximum sentence of five years in prison if found guilty.

A sixth suspect - a former director of the company that runs Indonesia's premier league - remains under police investigation.

On Monday, authorities deployed hundreds of security personnel around the court and the trial was held virtually for security reasons.

Outside the courthouse, Rink Hanifah held up pictures of her son Agus Riansyah, one of the victims who went to watch the football match and never returned.

Authorities told Arema FC supporters not to travel to Surabaya for the trial, for fear of clashes with police or rival fans.

Police described the Oct 1 pitch invasion as a riot and said two officers were killed, but survivors accused the police of using excessive force.

They were seen kicking and beating pitch invaders before indiscriminately firing tear gas rounds into the stands, despite football's world governing body FIFA outlawing the use of such riot control methods at stadiums.

The government also suspended all competitive football games after the disaster, but league matches resumed last month without fans in the stands.

Indonesian President Joko Widodo ordered an investigation into what happened and pledged to demolish and rebuild Arema's Kanjuruhan Stadium according to FIFA standards.

The task force investigating the stampede called on the football association chief and all its executive committee members to resign, but they have refused to do so.

The stampede was one of the world's deadliest stadium disasters since 320 people were killed in a crush at a football match in Peru in 1964.