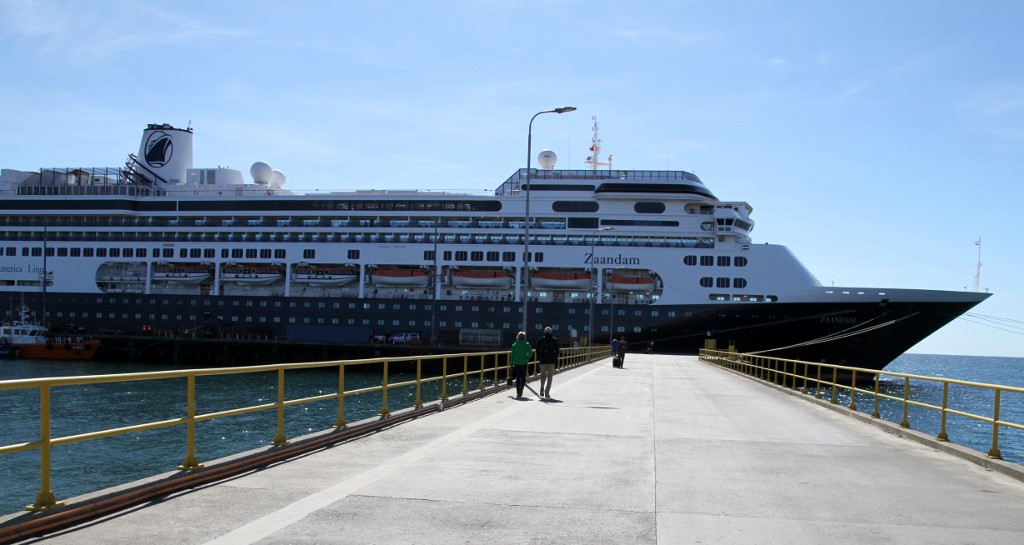 The Zaandam ship cruise, sailing under the Dutch flag and operated by the Holland America (Carnival) group, with 1,800 people on board, is seen in Punta Arenas, in southern Chile
SANTIAGO - AFP

More than 1,800 people stuck on board a cruise ship off the Pacific coast of South America, with 42 complaining of flu-like symptoms, are desperately hoping to be allowed to dock - somewhere.

The Zaandam liner run by Holland America left Buenos Aires, Argentina, on Mar 7 and was supposed to arrive last Saturday at San Antonio, near Santiago in Chile.

Its plight is the latest affecting the global cruise industry, which has seen vessels refused entry to ports and others locked down after new-coronavirus cases were confirmed on board during the pandemic.

Along the way, the Zaandam docked in Punta Arenas, in Chile's far south, before leaving there just days before Chilean President Sebastian Pinera closed the country's borders on Mar 18.

Soon after, the company suspended all its cruises due to measures including the closure of land, air and sea borders imposed by governments all over the world to prevent the pandemic's spread.

It headed back to Punta Arenas in a bid to arrange for its more than 1,200 passengers and almost 600 crew to take flights back to their home countries.

"Despite previous confirmations that guests could disembark in Punta Arenas, Chile, for flights, we were not permitted to do so," Holland America said in a statement on its website.

"No one has been off the ship since Mar 14 in Punta Arenas."

The 42 showing flu-like symptoms are quarantined.

"We heard that one ship that managed to dock at Punta Arenas was greeted by locals throwing rocks!" Bates, who boarded the Zaandam in Buenos Aires in a group of 20 Australians, said on Facebook.

The ship sailed to Valparaiso in Chile where it remained at anchor last Friday to Saturday while taking on fuel, provisions and medication before continuing to San Antonio.

Rear Admiral Yerko Marcic, the head of Chile's national defense at Valparaiso port, said eight Chileans were allowed to disembark, along with two French people for humanitarian reasons because "they had a high risk chronic illness and their medication was not going to last until the ship reached land".

There are more than 100 French passengers aboard.

The ship has asked all passengers to remain in their rooms "out of an abundance of caution" where they are provided their meals by room service.

"Since it is flu season, and COVID-19 testing is not available on board, it is difficult to determine the cause of these elevated cases at this time," said Holland America.

Since then, the ship has continued northwards and by Tuesday was off the coast of Peru, where local authorities told AFP the liner would not be allowed to dock in the port of Salaverry.

Holland America said "all ports along Zaandam's route are closed to cruise ships" and so it had sent another liner, the Rotterdam, from Puerto Vallarta in Mexico to meet the Zaandam this Thursday off the coast of Panama.

The Rotterdam is carrying "extra supplies, staff, COVID-19 test kits and other support as needed" to transfer to the Zaandam.

The aim is to reach Fort Lauderdale, Florida in the US on Mar 30, "however we are still working on securing a reservation to transit the Panama Canal", the company said.

"Alternative options are also being developed."

Passengers are not losing hope they will soon be able to set foot on dry land and go home.

Syed Irtiza Hassan posted a picture on Facebook alongside his wife and three children.

"Staying positive but hope to get to land soon and maybe some fresh air days if it is safe," he wrote.

Another passenger, Stan Ridgewell, uploaded a picture of himself next to his cabin window.

"I have set my seat up to make my room with a view," he wrote. "Fresh air soon please, but only the healthy type."