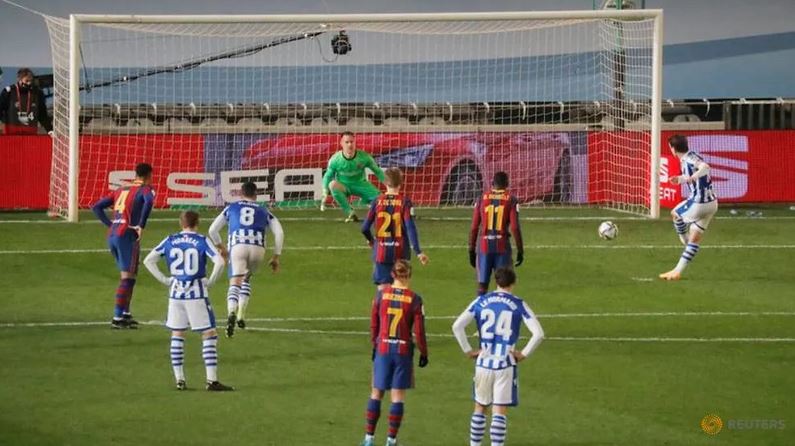 Barcelona booked their place in the final of the Spanish Super Cup after overcoming the absence of injured Lionel Messi to beat Real Sociedad 3-2 in a penalty shootout following a 1-1 draw after extra time on Wednesday (Jan 13).

De Jong headed Barca in front in the 39th minute after nice link up play between Martin Braithwaite and Griezmann but the Dutchman committed a handball early in the second half and Oyarzabal levelled from the spot.

Holders Real Madrid meet Athletic Bilbao on Thursday in the other semi-final of the competition, which is being held across southern Spain after initial plans to play it in Saudi Arabia were wrecked by the coronavirus pandemic.

"I had four names down to take penalties, I asked who took the fifth and Riqui said he would. Perfect," said Barca coach Ronald Koeman.

"It was a great game, both sides played really well, it was really intense and both teams had chances to win the game."

Oyarzabal said he was proud of Sociedad's efforts over the 120 minutes but admitted losing on penalties "hurt even more".

Messi missed Barca's warm-up session on the morning of the game due to thigh discomfort and Braithwaite took his place up front, while young central defender Oscar Mingueza came in at right back to deputies for Sergino Dest, who was not fully fit.

Sociedad, who made a blistering start to the La Liga season but have since faded, ran their hearts out to keep Barca at bay in a tight match before the game opened up in extra time, when both sides came close to finding a winner.

Barca have won the Super Cup a record 13 times but lost to Atletico Madrid at the semi-final stage of last year's competition and coach Ernesto Valverde was sacked as a result, despite the team then sitting top of La Liga.