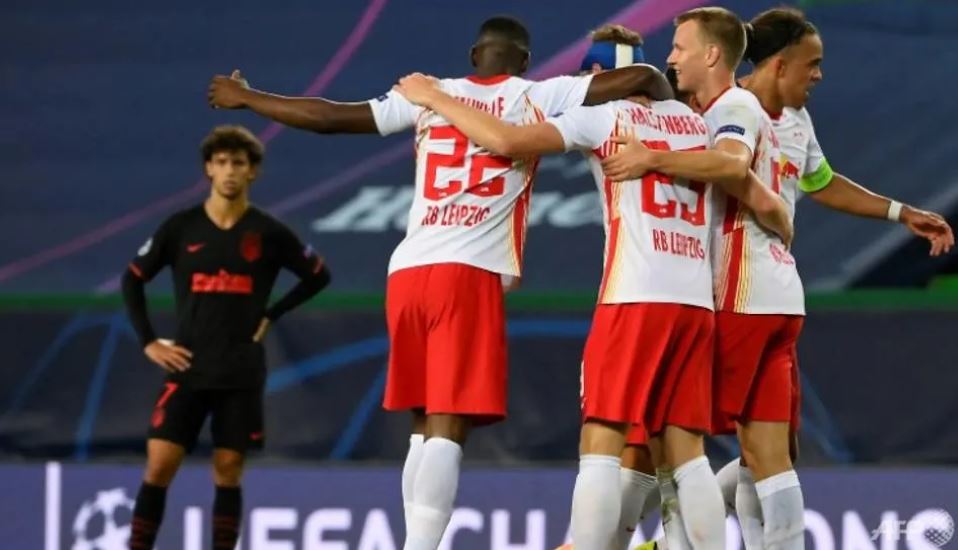 Atletico Madrid again paid a heavy price for defensive tactics in the Champions League with a 2-1 defeat by unfancied RB Leipzig in the quarter-finals on Thursday (Aug 13) as they passed up a golden opportunity to claim Europe's top prize.

With their bete noire Real Madrid out of the competition and having avoided favourites Manchester City, Bayern Munich and Barcelona in the draw, everything seemed to be falling the way of Atletico, who knocked holders Liverpool out in the last 16.

But as in last year's 3-0 round of 16 loss to Juventus, which sent them packing after they had beaten the Italians 2-0 in the first leg, Atletico's famously defensive tactics were their undoing, as they failed to take the initiative in a top level game in which, for once, they were the favourites.

"Atletico's stinginess cost them dearly," said the front cover of Spanish newspaper Marca, lambasting manager Diego Simeone's tactics and his players for being over-run by Julian Nagelsmann's inexperienced but fearless Leipzig side.

Atletico have so often revelled in the underdog role, outsmarting Liverpool and pulling off other famous European wins over the likes of Bayern Munich and Barcelona in years gone by.

Against Leipzig they had to take the initiative, but instead Simeone deployed a cautious 4-4-2 formation with two holding midfielders and his side created little in the first half.

He ripped up the formula after Dani Olmo put Leipzig ahead by throwing on Joao Felix and the €126 million (US$148.81 million) forward instantly made Atletico more dangerous as he won and converted a penalty to bring the scores level.

However, it was a damning indictment of Simeone's approach that he did not wish to play his club's record signing from the start in their biggest game of the season.

Simeone plus the experienced Koke and Saul held their hands up after the match and admitted Leipzig deserved to win but there was no reflection on the way they had approached the game.

The Argentine coach, who transformed Atletico's fortunes when he took over a fallen giant in 2011, still enjoys absolute power at the club and is unlikely to suffer any consequences from the defeat.

But if Atletico are to finally lift the prize they covet most and truly dine amongst Europe's elite, they must start playing like them and that means finding a way to break down teams as stubborn as they usually are.