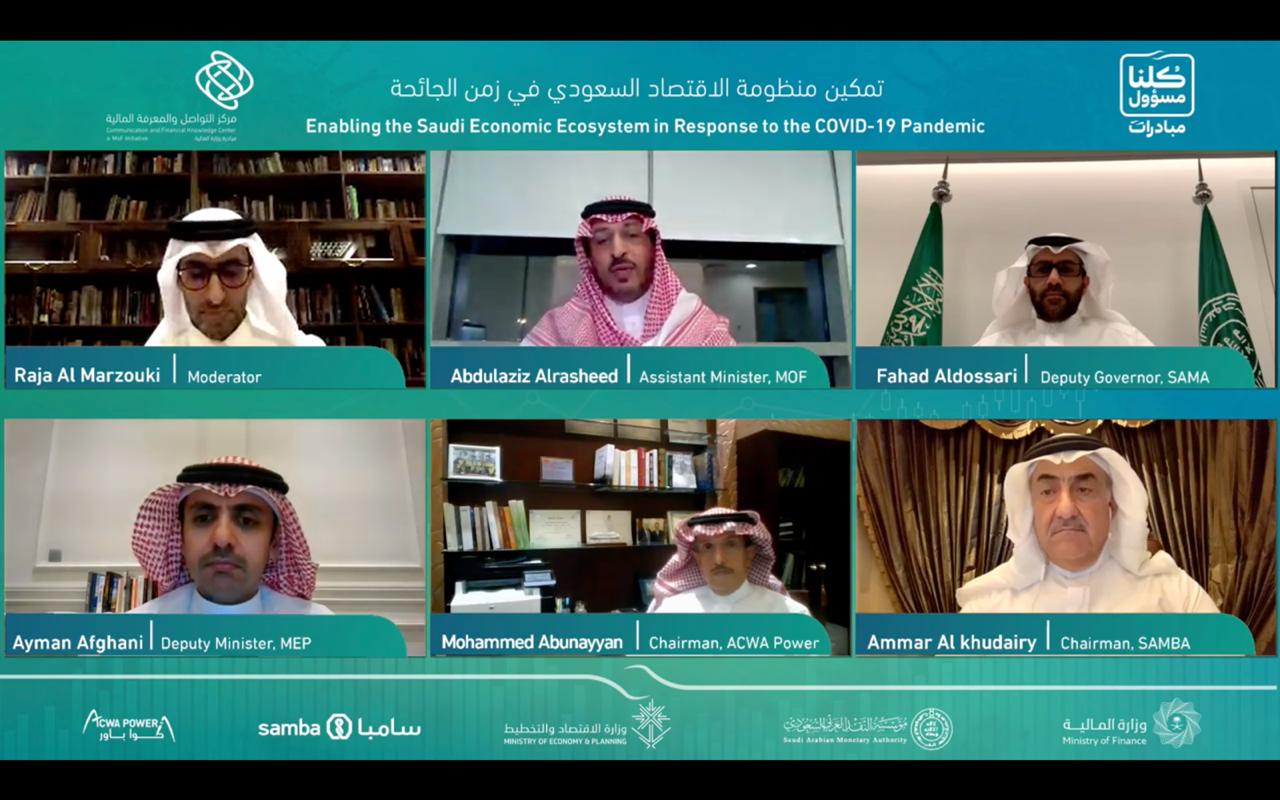 The Communication and Financial Knowledge Center (CFKC) (a MOF Initiative) held a webinar entitled “Ena-bling the Saudi Economic Ecosystem in Response to the COVID-19 Pandemic” on 08th of June 2020. A num-ber of public and private sector officials participated in the event.

Mr. Abdulaziz Al Rasheed confirmed that the current COVID-19 crisis overwhelming the world came at a time when many countries did not have sufficient financial headroom to take measures similar to what happened in the 2008 global economic crisis. Al Rasheed pointed out that the Corona pandemic caused a sharp decline in global demand for oil and gas and that had a significant impact on government revenues, which required a revisit of 2020 spending plans, and a re-ordering of priorities with a focus on serving the health sector to maintain the health of citizens and residents in KSA. Furthermore, Mr. Abdulaziz indicated that the challenge that was and is still facing KSA and the whole world is to foresee the financial situation over the current or next year, in terms of expectations of government revenues or planning for expenditures in line with the Vi-sion 2030 objectives and maintain good levels of spending to provide the citizen with all basic services that s/he expects from the government.

Al Rasheed explained that initiatives and packages of government measures to mitigate negative effects on the financial and economic sector, paid due regard to private sector’s suffering from cash flows through vari-ous initiatives, including postponing financial dues and tax and zakat returns. The value of initiatives aimed at providing cash liquidity to the private sector so as to be able to manage its economic activities totals about SAR 80 billion, in addition to allocating SAR 50 billion to accelerate payment of private sector’s dues. He indi-cated that more than 640,000 enterprises had benefited from postponement of Zakat declarations and 250,000 enterprises had also benefited from VAT declaration postponement initiative, noting that these gov-ernment initiatives support the financial aspect of private sector enterprises, which contribute to providing them with a financial ability to overcome the crisis with minimal damage.

For his part, Dr. Fahad Al Dossari pointed out that countries have taken various measures to deal with the current situation, such as reducing interest rates and facilitating lending programs to help the private sector overcome the impacts of this pandemic. In addition, Dr. Fahad added that SAMA announced the launch of a program valued at $50 billion in the middle of March to support the private sector, especially micro, small and medium enterprises, with a view of mitigating the expected financial and economic consequences of precau-tionary measures. The number of contracts benefiting from deferred payments program exceeded 68,000 with a total amount exceeding SAR 48 billion until the beginning of June. Al Dossari praised KSA's leadership role in mitigating COVID-19 impacts by virtue of its effective leadership of G20 and holding an extraordinary virtual summit headed by the Custodian of the Two Holy Mosques to coordinate international efforts and boost global economic recovery.

As for financial and monetary indicators amid COVID-19 crisis, the Deputy Governor for Research and Inter-national Affairs at SAMA emphasized that KSA indicators are at good levels. This was reflected in the growth of bank credit by 12.2% in April; which is the highest since 2015.

Furthermore, Mr. Ayman Afghani said that the global economy was not at its best state prior COVID-19 crisis for several reasons; including USA/China trade war and Brexit deliberations, and all these matters played a key role in magnifying COVID-19 negative impacts.

At the local level, Afghani stated that government initiatives aim to mitigate financial and economic impacts on the private sector so as to be able to continue its active participation in the economy and overcome the im-pacts of the pandemic, in addition to maintaining Saudization rates realized during the period before. Moreo-ver, he pointed out that 400,000 Saudis across 80,000 enterprises had benefited from the Wage Support Ini-tiative through SANED program, as COVID-19 most-affected industries benefited from such support, espe-cially sectors such as wholesale and retail trade, construction and building, hotel and accommodation and food services.

Eng. Ammar Al Khudairy believed that the economic impacts of the current crisis will continue for at least one to two years, and he explained that there is a difference between what happens in the economy and what happens in financial markets. He attributed the difference to two reasons; crash in interest rates and the stimulus packages adopted by central banks. Al Khudairy praised SAMA initiatives to deal with the crisis, con-firming that such initiatives did not only mitigate but also eliminate the impact. Accordingly, loans were re-scheduled at no additional cost to the private sector’s beneficiaries.

Moreover, Mr. Mohammed Abunayyan paid tribute to KSA's government measures and initiatives to contain the spread of Coronavirus, which surpassed other countries in the world, shedding light on the importance of supporting SMEs amid this crisis as they constitute an essential part of the economy, and expressing his con-fidence in the economy’s restoration to normal condition in the wake of the pandemic.

It is worth noting that the Webinar is part of the CFKC efforts to achieve its objectives of promoting partner-ship between decision makers in government and private sectors and specialists in the financial and econom-ic fields, with the purpose of spreading knowledge, exchanging views and raising awareness around the cur-rent issues. As a part of its efforts, CFKC also held a webinar two weeks ago titled “Saudi Arabia: A Sustain-able Investment Ecosystem” which hosted several officials from public sector, international financial institu-tions and other investors. The Center also held the third session of “Knowledge Gathering” titled “Telework”. “In addition, CFKC publishes daily media reports to follow the developments of the COVID-19, which review the most important economic impacts as a result of the outbreak of this pandemic, and its impacts on the main global markets, as well as the most important local and international news circulating about the virus, and economic developments locally and internationally.