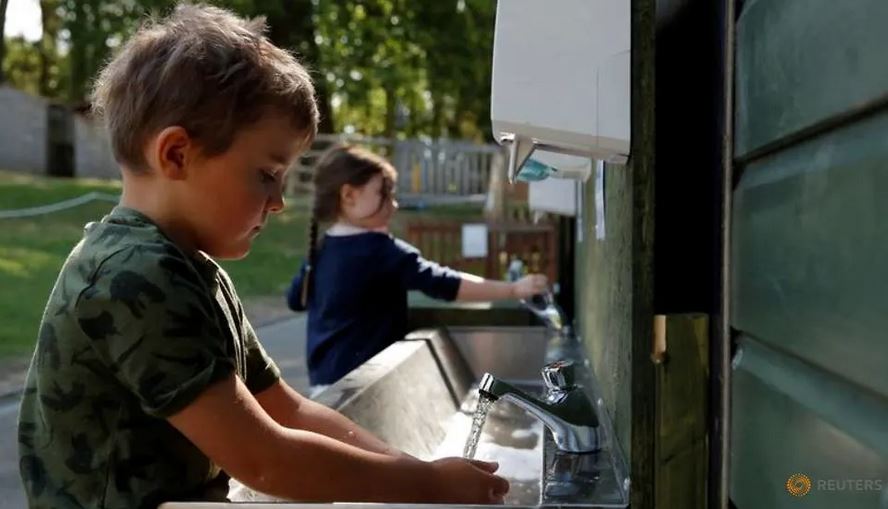 Children are seen washing their hands at Heath Mount School as some schools reopen, following the outbreak of the coronavirus disease (COVID-19) at Watton-at-Stone, Britain on Jun 2, 2020. (Photo: Reuters/Andrew Couldridge/File Photo)
LONDON - AFP

British Prime Minister Boris Johnson on Friday (Jun 19) said English schools would receive £1 billion (US$1.2 billion) in funding to help pupils catch up after missing months of classes due to the coronavirus.

The financial boost comes as his government faces withering criticism over its broken pledge to have all primary school children back for a month before the summer holidays.

It is also struggling to get all pupils back for the new academic year in September if social distancing rules requiring people to keep two metres apart remain in force.

The new money includes £650 million for state-run primary and secondary schools to "lift educational outcomes", and £350 million for a tutoring scheme specifically for the most disadvantaged youngsters.

Headteachers will be able to decide how to spend the £650 million, but the government said it expects it to be spent "on evidence-based interventions", in particular small group tuition.

"This £1 billion catch-up package will help headteachers to provide extra support to children who have fallen behind while out of school," Johnson said.

British schools have been closed to most pupils since late March, when the country headed into lockdown as the virus spread out of control.

Some primary school year groups were able to come back earlier this month, but the government backtracked on the remainder and some older students returning amid staff shortages and social distancing concerns.

Johnson is under growing pressure to relax the rules to one metre to make it easier for schools and hospitality businesses to restart.

In Northern Ireland, most pupils are set for a return in the autumn after the devolved government agreed Thursday to cut the social distancing measure to one metre for pupils in school.

"I am determined to do everything I can to get all children back in school from September, and we will bring forward plans on how this will happen as soon as possible," Johnson said.

Education Secretary Gavin Williamson said the government also hopes to allow providers running holiday clubs and activities for children over the summer to open "if the science allows".

"Guidance will be provided to the sector on how to implement the protective measures necessary to open safely, and to parents on how to minimise the spread of the virus if they choose to attend," he added.