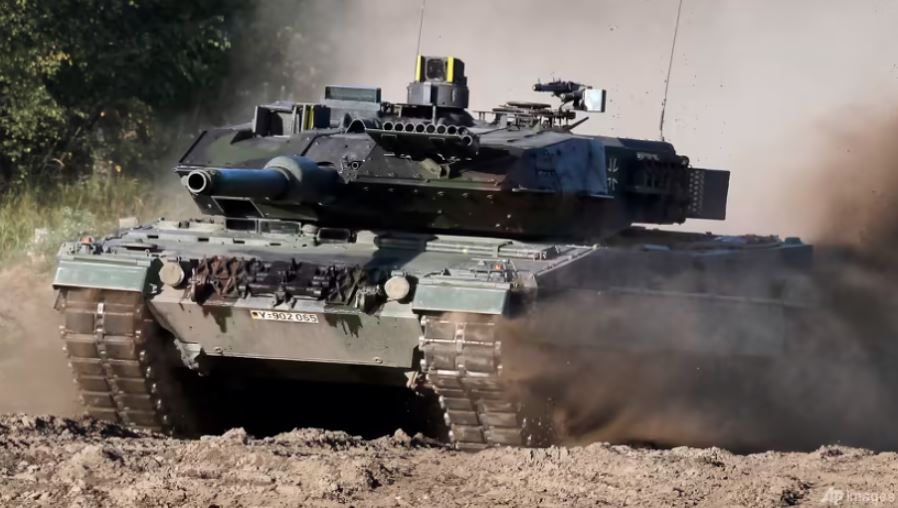 A Leopard 2 tank is pictured during a demonstration event held for the media by the German Bundeswehr in Munster near Hannover, Germany, Wednesday, Sep 28, 2011. (File photo: AP/Michael Sohn)
GENEVA - AP

Following intense pressure from its allies, Germany appears to be inching toward approving deliveries of high-tech Leopard 2 main battle tanks that Ukraine and its biggest Western backers hope will boost Kyiv’s fight against Russian invaders.

Over the weekend, German Foreign Minister Annalena Baerbock said Berlin would not get in the way if Poland - arguably Ukraine's most vocal supporter among European Union neighbours - wants to ship Leopard 2 tanks from its arsenal across the border into Ukraine.

And Germany is now not ruling out supplying such tanks to Ukraine itself, cautioning however that the implications of such a step need to be carefully weighed.

Here's a look at what those tanks might mean for Ukraine's defence against Russian forces - and hopes for driving them out.

WHAT IS THE LEOPARD 2?

Germany's Krauss-Maffei Wegmann, the manufacturer of the Leopard 2, touts it as “the world's leading battle tank" that for over nearly a half-century has combined aspects of firepower, protection, speed and manoeuvrability, making it adaptable to many types of combat situations.

The 55-ton tank has a crew of four and a range of about 500km, and top speeds of about 68kmh. Now with four main variants, its earliest version first came into service in 1979. Its main weapon is a 120mm smooth bore gun and it has a fully-digital fire-control system.

HOW MANY COULD BE SENT TO UKRAINE?

One big appeal of the German-made tanks is their sheer number: More than 2,000 have been deployed in over a dozen European countries and Canada. Overall, KMW says over 3,500 units have been supplied to 19 countries.

Rheinmetall AG, a German defence contractor that makes the 120mm smoothbore gun on the Leopard 2, says the tank has been deployed by “more nations than any other".

According to a recent analysis by the International Institute for Strategic Studies, a London-based global think tank, some 350 Leopard 2s - in different versions - have been sent to Greece, and Poland has about 250 of varying types. Finland has 200 in operation or in storage.

For Ukraine's war against Russia, “It is believed that for the Leopard 2 tanks to have any significant effect on the fighting, around 100 tanks would be required”, the IISS analysts wrote.

Ukraine's defence minister wants 300 tanks, and some European Union leaders support him on that.

“We need a fleet of 300 tanks,” Luxembourg’s Foreign Minister Jean Asselborn said Monday in Brussels, alluding to the wide deployment of Leopards across Europe, and the need for “synchronous” weaponry - that can operate smoothly together.

Getting Leopards into Ukrainian hands isn't as easy as rolling them across the border from friends farther West in Europe. IISS estimates that three to six weeks of training would be needed for operating crews and support staff to reach basic proficiency.

WHAT DIFFERENCE WOULD IT MAKE TO THE WAR?

Yohann Michel, a research analyst for defence and military affairs at IISS, said such tanks could allow Ukraine to go onto the offensive in the 11-month-old conflict that has been stalemated for months following two key Ukrainian counteroffensives that recaptured areas occupied by Russian forces for months in the northeast and south.

“In this type of conflict, it's just not possible to carry out large-scale offensives without the full variety of armoured combat equipment and armoured vehicles, and tanks are a part of that," he said by phone.

In addition to Main Battle Tanks, or MBTs, like the Leopard II, others include infantry fighting vehicles and armoured personnel carriers.

Western deliveries of Leopard 2s could help equip Ukraine with needed high-calibre munitions to replace its own Soviet-era stockpiles that have been dwindling - opening a new avenue for supplies of Western firepower to get to Ukraine.

“In my view, that's the primary impact,” Michel said by phone. “The second impact, of course, is to increase the number of tanks available in the Ukrainian arsenal," which he estimated at “several hundred” right now.

WHY DOESN'T UKRAINE HAVE LEOPARDS ALREADY?

Germany has the final say about whether Leopard 2s can be delivered - even from other countries' arsenals - and has been reticent about anyone shipping them to Ukraine.

More hawkish Western allies have been stepping up the pressure on Germany - which has called for a united front among Ukraine's allies - but the United States previously refused to send its powerful M1 Abrams tanks.

US officials had said that the Abrams was tough to maintain, hard to train Ukrainians to operate and ran on jet fuel - making it a poor choice for this phase of the war.

But in an apparent reversal, Washington now appears poised to start a process that would eventually send dozens of M1 Abrams battle tanks to Ukraine.

Allies and military analysts say the Leopard 2 is diesel-powered - not driven by jet fuel that powers the M1 Abrams - and is easier to operate than the big US tanks, and thus has shorter training times.

French President Emmanuel Macron said Sunday that he had asked his defence minister to “work on” the idea of sending some of France’s Leclerc battle tanks to Ukraine.