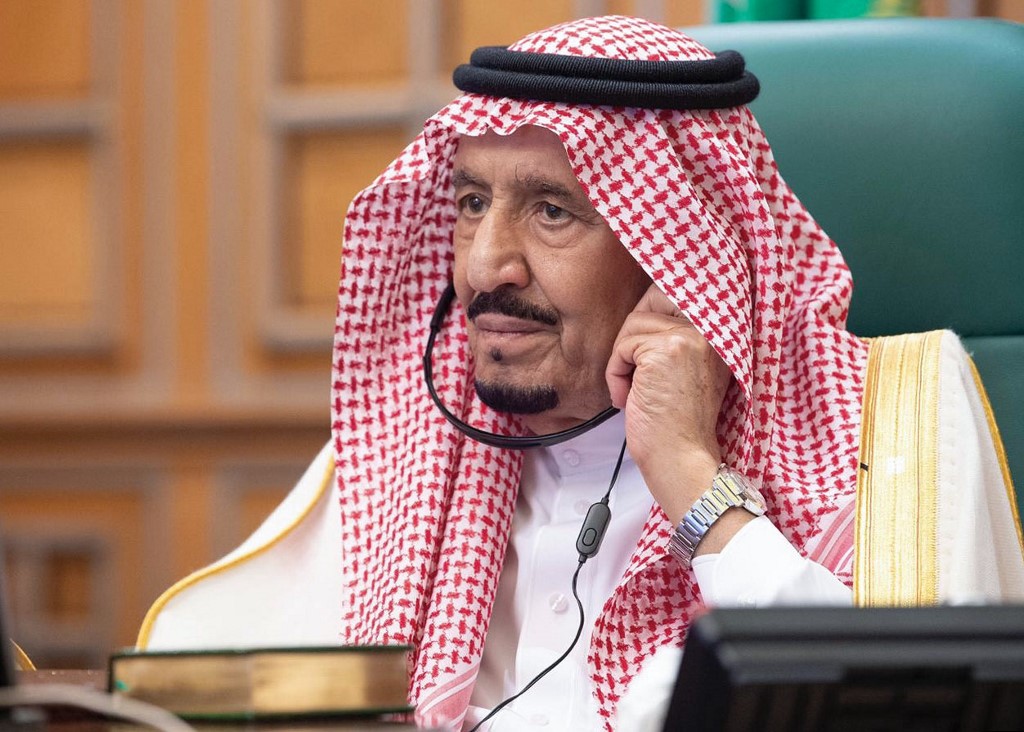 King Salman bin Abdulaziz chairing an emergency G20 videoconference, in the capital Riyadh, to discuss a response to the COVID-19 crisis.
RIYADH - AFP

G20 nations pledged a "united front" on Thursday (Mar 26) in the fight against coronavirus, saying they were injecting US$5 trillion into the global economy to counter the pandemic amid forecasts of a deep recession.

US President Donald Trump and Russian President Vladimir Putin joined the emergency video conference chaired by Saudi Arabia's King Salman, who called for coordinated action while facing pressure to end an oil price war between Riyadh and Moscow that has roiled energy markets.

The talks come amid criticism that the G20 has been slow to address the COVID-19 pandemic, which has left more than 21,000 dead worldwide and triggered financial shock waves as more than three billion people are locked down.

"We are strongly committed to presenting a united front against this common threat," the leaders said in a joint statement after the summit.

"We are injecting over US$5 trillion into the global economy, as part of targeted fiscal policy, economic measures, and guarantee schemes to counteract the social, economic and financial impacts of the pandemic."

The figure was a sum total of the fiscal stimulus packages adopted by individual G20 states, the Chinese foreign ministry said, adding that Beijing's share amounted to US$344 billion.

As concerns mount for poorer countries without access to capital markets or adequate health facilities, G20 leaders also pledged to work with bodies such as the International Monetary Fund to deploy a "robust" financial package to support developing nations.

"It is our responsibility to extend a helping hand to developing countries and (the) least developed countries," King Salman said.

Putin called for a "moratorium" on sanctions during the pandemic, telling G20 leaders it was a matter "of life and death".

He did not specify which countries should be earmarked for sanctions relief. Russia has faced numerous rounds of Western sanctions following the annexation of Crimea in 2014.

The world's 20 most industrialised countries are scrambling to defend their virus-wracked economies amid forecasts they will likely plunge into a recession.

On Wednesday, the financial ratings agency Moody's estimated the G20's overall gross domestic product would contract by 0.5 per cent this year, with the US economy shrinking by 2.0 per cent and the eurozone by 2.2 per cent.

"The G20 declaration on the COVID-19 pandemic is a document of global resolve," said Markus Engels, from the Global Solutions Initiative, a network of think tanks.

"The lesson the G20 leaders take away from their meeting should be that social and international solidarity must once again be acknowledged as the most important instrument for combating the crisis."

But amid warnings that tens of millions of lives could be lost to the virus globally, international aid agency Oxfam said the G20 action was "not enough".

"The world's richest governments are still only warming up to the scale of the task," said Chema Vera, Oxfam's interim executive director.

"G20 leaders must set a truly ambitious plan ... to save lives, including a massive injection of funds into public health around the globe."

This week, French President Emmanuel Macron and his Chinese counterpart Xi Jinping pushed for an emergency G20 summit to limit the impact of the pandemic.

The lack of immediate action stood in contrast to the 2008 financial crisis, when the group quickly swung into action to mobilise assistance for vulnerable countries.

Talk of global coordination has yet to resonate under Trump's isolationist presidency.

On Wednesday, US Secretary of State Mike Pompeo took aim at China, saying the top diplomats of the Group of Seven agreed with him that Beijing was waging a "disinformation" campaign about the pandemic.

At the G7 talks, a day before the G20 summit, Pompeo alleged Beijing was engaged in a social media campaign that included conspiracy theories centring on the US being behind the virus, which was first detected in the Chinese metropolis of Wuhan.

The G7 failed to agree on a joint declaration amid Pompeo's insistence on labelling the coronavirus as the "Wuhan virus", US media reported.

"The US has provided a perfect example of what not to do as the country pushes its 'US-first' ideology to the extreme," said Engels.

Crude oil prices - hammered by the coronavirus outbreak's impact on demand as well as by a price war between Saudi Arabia and Russia - were also expected to be at the centre of the discussions.

However, the Kremlin said "the oil topic" was off the table.