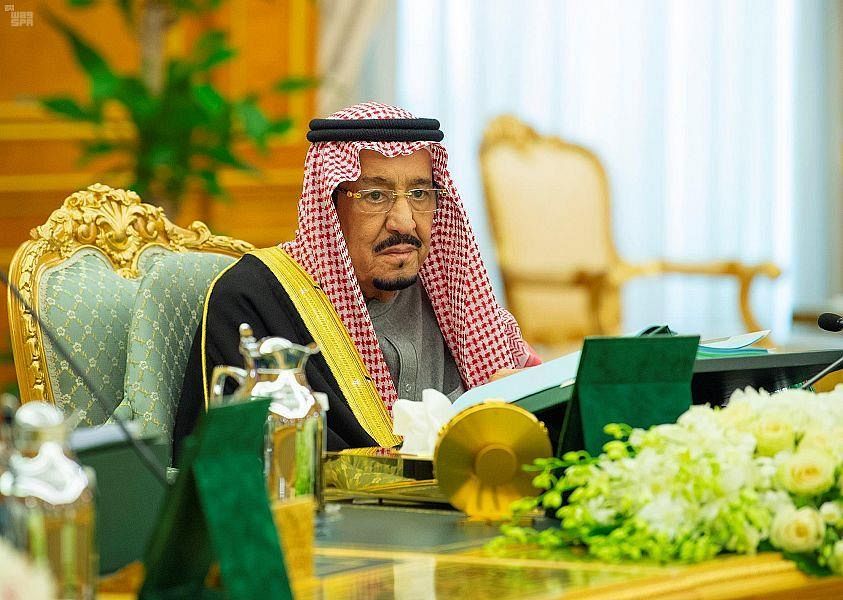 The Cabinet expressed sincere condolences to Sultan Haitham bin Tariq bin Taimur of Oman, the Omani royal family, the brotherly Omani people, and the Islamic and Arab nations on the death of Sultan Qaboos bin Said, asking Allah Almighty to bestow mercy upon the soul of the deceased.

The Cabinet also congratulated Sultan Haitham bin Tariq bin Taimur on assuming the reins of power, wishing him all the best in continuing the march to the Sultanate’s prosperity and development.

The Minister of Media, Turki bin Abdullah Al-Shabanah, pointed out in a statement to the Saudi Press Agency after the session, that the Cabinet reviewed works of the 44th Session of the Muslim World League (MWL) Supreme Council held at the Holy Grand Mosque, with broad participation of leaders from 82 countries. The Supreme Council cited efforts of the Custodian of the Two Holy Mosques and HRH Crown Prince, their keenness on joint Islamic action initiatives, and their support for peace and harmony efforts around the world. The Supreme Council also announced establishing the "MWL Islamic Fiqh Council Award" and the “Makkah Document Award". The Supreme Council 44th Session reviewed the Kingdom’s care and attention to issues of the Islamic nation and its keenness on unifying it. The Supreme Council praised sincere efforts of Islamic countries that are keen to adhere to what the Sharia established in meanings of fraternity and warning against division. 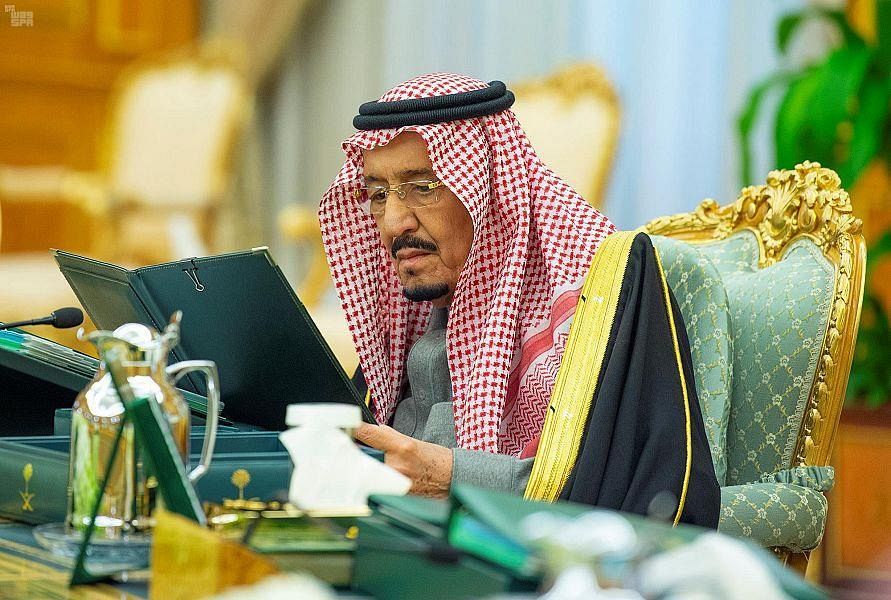 The Cabinet welcomed the opening of 12th Session of the International Petroleum Technology Conference (IPTC) 2020 currently being held for the first time in the Kingdom under the patronage of HRH Crown Prince, and was opened on his behalf by the Minister of Energy in the presence of a number of senior officials and heads and leaders of the energy industry from various countries of the world. The Cabinet stressed that the Conference, being hosted by Saudi Aramco, comes in line with the Kingdom's Vision 2030, as this industry reflects ongoing efforts in the Kingdom to make the global energy vision a reality.

The Minister of Media stated that the Cabinet addressed the international progress achieved by the Kingdom of Saudi Arabia in the field of providing humanitarian aid obtaining fifth place globally, and the first in the Arab world, according to what was published by the United Nations Financial Tracking Service (FTS) 2019, confirming that this came due to the unlimited support of the Custodian of the Two Holy Mosques and HRH Crown Prince for humanitarian and relief work that reflects established values and firm principles of the leadership of the Kingdom and its people, derived from the teachings of the Islamic religion.

The Cabinet affirmed the Kingdom's continuous efforts to activate its international partnerships in the field of combating corruption, pointing to the Kingdom's clarification during the meeting of the Conference of the States Parties to the Arab Convention against Corruption in the Moroccan capital, on its keenness to issue necessary legislations, take measures needed to protect integrity and combat corruption, money laundering, and meeting international standards and requirements that the Kingdom got recognized at regional and international levels, as the first Arab country to join the Financial Action Task Force (FATF).

The Cabinet renewed the Kingdom's condemnation and denunciation of the Iranian aggression and its violation of the Iraqi sovereignty by targeting two Iraqi military bases in which international coalition forces to fight Daesh "ISIS" are located, and its affirmation to stand with the people of Iraq to transcend everything that threatens its security, stability, and Arab affiliation. The Kingdom urged the international community to work to compel Iran to respect the sovereignty of states in the Middle East, respect international laws and treaties, and stop undermining the security of the region.

The Cabinet expressed the Kingdom's strong denunciation and condemnation of the bombing of a mosque in southwest Pakistan, which led to a number of deaths and injuries, stressing the Kingdom's refusal to violate the sanctity of mosques, bloodshed, and intimidation of people. The Kingdom expressed its condolences and sympathy to the families, government, and people of the Islamic Republic of Pakistan, wishing a speedy recovery for the injured. 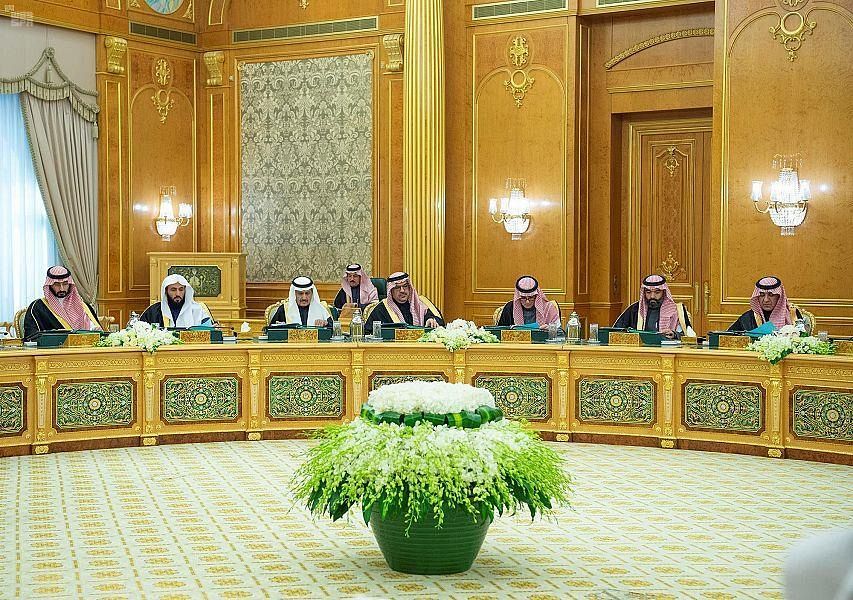 The Cabinet approved a memorandum of understanding for cooperation in the fields of reconstruction, housing, and construction between the Ministry of Housing in the Kingdom of Saudi Arabia and the Ministry of Equipment Housing and Land Development in the Republic of Tunisia.

A royal decree has been prepared.

The Cabinet approved the Air Services Agreement between the Government of the Kingdom of Saudi Arabia and the Cabinet of the Republic of Albania.

The Cabinet appointed Ahmed bin Barak Al-Dakhil; Kamal bin Abdulhamid Al-Juhani; and Saud bin Mohammed Al-Gharabi as members of the private sector in the Board of Directors of the Saudi Accreditation Center.

The Cabinet appointed Princess Haifa bint Mohammed bin Saud bin Khalid Al Saud as a member of the Board of Directors of the General Authority of Civil Aviation as a representative of the Saudi Commission for Tourism and National Heritage (SCTH).

The Cabinet approved the final account of King Abdullah City for Atomic and Renewable Energy for a previous fiscal year. 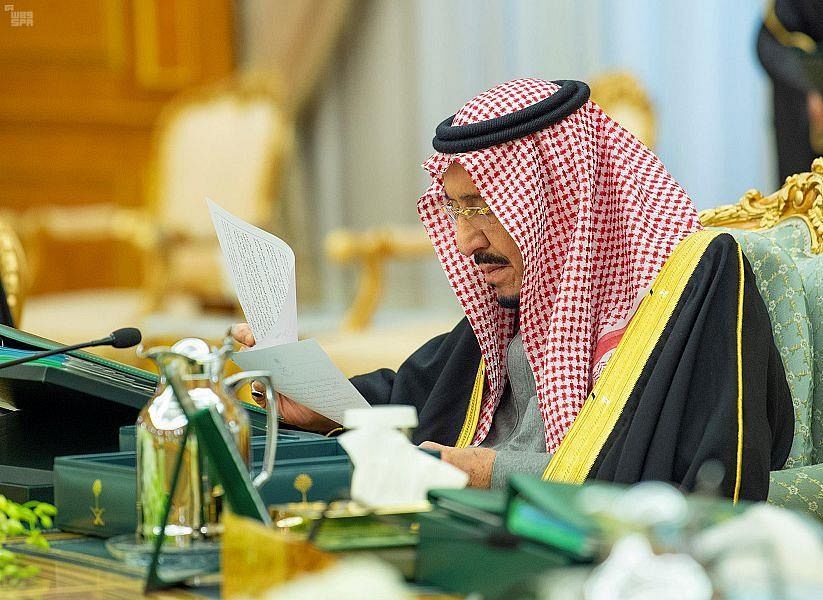 The Cabinet approved a number of promotions and an appointment at 14th and 15th ranks as follows:

1- Musaed bin Mohammed bin Hamad Al-Mazyad is promoted the post of Planning Consultant (15th Rank) at the Ministry of Defense.

2- Abdulellah bin Abdulrahman bin Ali Al-Shahrani is promoted to the post of Director General of the General Department for Administrative and Financial Affairs (15th Rank) at the Air Force.

3- Ibrahim bin Mohammed bin Ibrahim Al-Haidari is promoted to the post of Planning Consultant (15th Rank) at the Ministry of Economy and Planning.

6- Ali bin Mohammed bin Abdulrahman Al-Jumaa is promoted to the post of Director General of Health Affairs in Qassim Region (14th Rank) at the Ministry of Health.

7- Mohammed bin Mubarak bin Saad Al-Shahrani is promoted to the post of Director General of Health Affairs in Madinah Region (14th Rank) at the Ministry of Health.

9- Abdullah bin Zaal bin Mohammed Al-Anazi is promoted to the post of Planning Consultant (14th Rank) at the Ministry of Economy and Planning.

The Cabinet reviewed a number of general topics on its agenda and made appropriate recommendations in their regard.