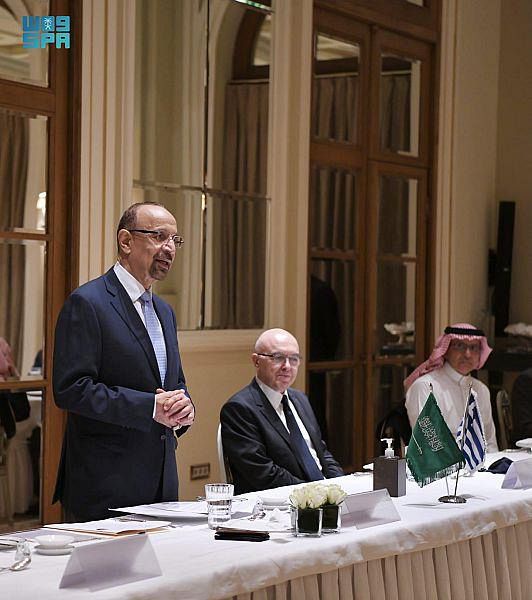 The Minister of Investment Eng. Khalid bin Abdulaziz Al-Falih began an official visit to Greece, during which he will meet with a number of senior government officials and executives in several major Greek companies in various business sectors, including tourism, transport and logistics, energy and water, mining, minerals, culture, and green initiatives. Also, he will participate in the investor roundtable hosted by the Hellenic Federation of Enterprises.
Al-Falih held his first meeting at the beginning of his visit with the Prime Minister of Greece Kyriakos Mitsotakis, where the two sides reviewed the strategic partnership between the two countries, since 1926, and the unprecedented opportunities available to Greek investors and companies in the Kingdom of Saudi Arabia, within the framework of the Kingdom 2030 vision.
In a statement on the occasion of this visit, Eng. Al-Falih said: "In light of the Kingdom's Vision 2030, the Kingdom's economy is open to the world at an unprecedented pace and size, and the Kingdom now offers promising investment opportunities for investors from all over the world, supported by the Kingdom's strategic location that provides direct access to our national market, and the world markets as well. We would like to see our friends and partners from Greece participate in taking full advantage of these opportunities."
He added: "With Greece's extensive experience in the logistics sector, particularly in the maritime transport as well as the tourism and hospitality sectors, it is expected that the giant projects established by the Kingdom of Saudi Arabia in this sector will receive special attention from our partners in Greece."
He also said, “This visit is to confirm that together we can take our current relationship to even greater heights, and I look forward to welcoming more Greek investors to the Kingdom.”
The visit aimed to familiarize officials and senior business executives in Greece with the achievements made within the framework of the Kingdom 2030 Vision, including legislative reforms, vision realization programs, as well as the broad support available to enhance the investment climate in the Kingdom, which was positively reflected in enhancing competitiveness of the Kingdom of Saudi Arabia, the ease of doing business in it, and the large number of opportunities that have become available to both Saudi and international investors, and this is expected to be of particular importance to investors from Greece, in addition to strengthening the long-term trade and investment relations between the Kingdom of Saudi Arabia and Greece.
During the visit, an agreement was also signed to establish the Saudi-Greek Business Council, between the Federation of Saudi Chambers, represented by its President Ajlan Al-Ajlan, and the Chairman of the Executive Committee of the Federation of Greek Companies, Euphthimios Vidalis and work to remove challenges and obstacles, in addition to exchanging information on available markets and investment opportunities.