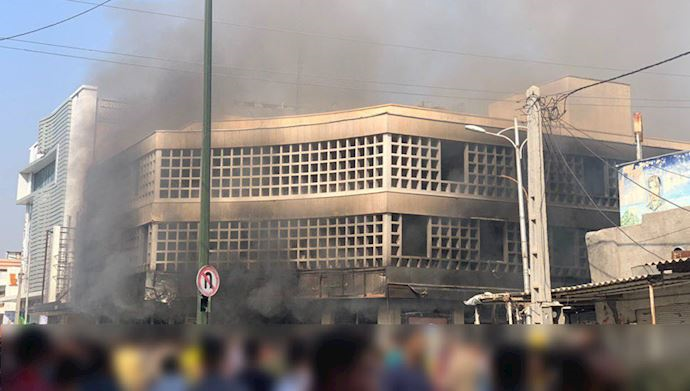 Iran: the City of Behbahan, is the vanguard of uprising Against the Mullahs

Behbahan is an oil-rich city in western Iran and in Khuzestan province. Most of the population is Bakhtiari Lor. The people of this city are renowned for their hospitality, generosity, and courage. Their resistance and the stories of the brave and zealous soldiers confronting Alexander and then Afghans are prominent in history. The city’s 10000 years history with its 70 ancient hills, towers, walls and moats around the city portrays its unique glory and grandeur. The proximity of the Zagros Mountains alongside fields of narcissus has added to the beauty of the city, but what stands out in the world scene is vanguard, resilience and bravery of its people confronting the religious tyranny ruling Iran is in recent uprising.

At first, the city's entrances were blocked by citizens, and people peacefully closed the main street by sitting in the street and were only chanting. But the violent response from security forces using baton and tear gas angered people and forced them to react. Security forces using high-pressure water cannons were pushing people away and shortly thereafter, security forces fired directly with live ammunition at the people. In the afternoon, direct firing and tear gas firing by security forces in Moalem, Javanmardy and Masjed Yazdy Streets continued. In Shiraz square, 2 brothers, Mehrdad Dashti and Mahmoud Dashti, were killed by security forces. One eye-witness said snipers fired at people from a multi-storey building in front of Melli Bank Square and this same scenario was reported by dozens of eye-witnesses. Most of those killed were shot in the head and neck. The security forces were ordered to massacre the demonstrators. People were stunned to see the security forces shooting at their citizens. 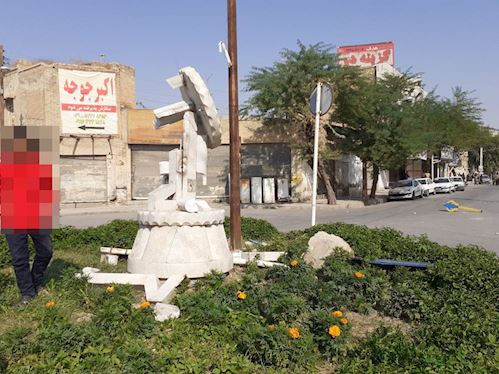 the toppling of a clergy's statue

So in response to this massacre, people identified the regime’s plain cloth agents and severely punished them. People organized in motorcycle team, set fire to regime centers and gas stations.

The mass movement of courageous and brave youth characterized Behbahan’s uprising. On Saturday morning, November 16, with slogans such as, death to Khamenei, death to dictator they set fire to Melli, export, Mellat, Sepah and Refah Karegaran banks. In total of 14 banks were set on fire in Behbahan.

All the branches of the banks were burned at the Nahvi intersection. The clashes spread from Helal Ahmar and Bimarestan intersections and from Bimarestan to the Marahel and Pirourzy Squares. On the second day of the protests, November 16, the composition of the security forces changed and the IRGC entered the scene. By the evening people stood in front of the armed IRGC forces, and the security forces came within three meters of people. People were chanting neither Gaza nor Lebanon my life for Iran. 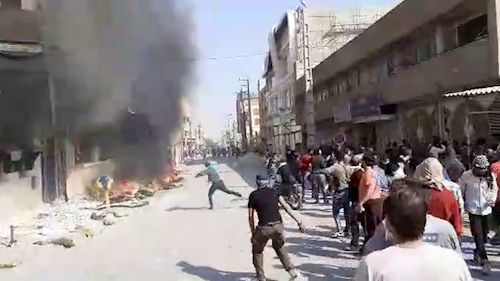 Another eye-witness said that after clashes and killings by security forces affiliated by IRGC they did not hand over the bodies of the dead to families for control of any unrest. They transferred some of the bodies to Ahwaz.

Government centers did not officially announce the deaths to their families, so it was not possible to identify the actual death toll.

On the second day of protests, the regime cut off electricity and Internet to cut off people's communication with the outside world.

Leila, one of the eyewitnesses on the scene whose cousin was missing during the protests and who is believed to be killed, says the day after the attack on his demonstration her uncle went everywhere to get news of his son: "No one confirmed he was killed nor was he given his son’s and no one confirmed he was in prison, but a forensic expert familiar to them said he was probably among the dead. My uncle was told we didn't know where your child was. We have not detained him, but one acquaintance said he saw himself his cousin was shot from the top of the government building, in the head, and in a few minutes his face was covered in blood and dropped to the ground and then people took him to the hospital but there is no news of him anymore. Even his name is not registered in the offices of two hospitals in the city."

Several other residents testified that people were shot at from the top of government building adjacent to old prison while they were moving towards the building toward the building.

Hassanzadeh, another eyewitness to the multiple bullet traces left on his father's car, said: "More than twenty bullets hit my father's car, which was parked near the National Library Square near the Melli Bank Square, my father took his car to authorities to show the damages to it and asked for compensation, but security forces told him; take your life and go because if you persist, you have to explain why your car was parked there at that time."

On Tuesday, due to the high number of Special Forces and the atmosphere of intimidation, there was virtually no possibility of further protests, and Special Forces and counterinsurgency forces were deployed all over the city, and the number of detainees over the course of several days was so high that it was virtually impossible to provide statistics.