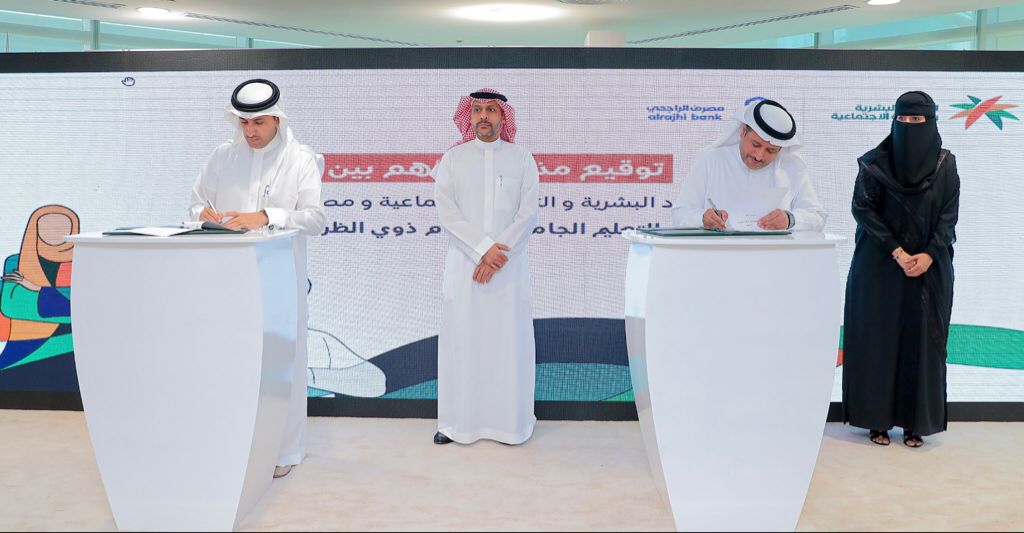 Al Rajhi Bank and the Ministry of Human Resources and Social Development signed an agreement on the "Al-Rajhi Bank Program for Educational Orphans Care," under which the bank will pay the tuition fees for bachelor's degrees at private universities for all orphans in the Kingdom who were not accepted at public universities.

Mr. Majid Al-Ghanimi, Deputy Minister of Labor and Social Development, and Mr. Waleed Al-Mogbal, CEO of Al Rajhi Bank, signed the agreement at the Ministry's headquarters in Riyadh in the presence of a number of officials from both sides.

His Excellency Deputy Minister Al-Ghanimi appreciated Al Rajhi Bank's efforts to provide such initiatives that contribute to the development and training of our orphans with special needs. All of this takes place within the context of community collaboration, mutual benefit, and collaborative efforts to achieve the Kingdom's Vision 2030.

Mr. Abdullah bin Sulaiman Al Rajhi, Chairman of the Board of Directors of Al Rajhi Bank, stated on this occasion that the bank aims to implement a qualitative initiative with a long-term impact on society through this agreement.

He emphasized that this initiative is the largest social and educational initiative in the Kingdom that belongs to this special group that is dear to our hearts, as it will include all orphans in the Kingdom, and that it is considered one of the bank's major social responsibility programs, which targets sustainable programs and applies the highest governance standards. Especially given that this is one of the Kingdom's Vision 2030 pillars, as well as their direct contact with various segments of society.

Al Rajhi went on to say that this initiative is in support of the charitable work process, which is receiving extreme and great attention from the Custodian of the Two Holy Mosques King Salman bin Abdulaziz and His Highness the Crown Prince, may God protect them, as the charitable sector witnessed the launch of many charitable and community initiatives with a significant positive impact.

He explained that the "Al Rajhi Bank Program for the Care of Educational Orphans" includes the bank's guarantee, through a specialized party (a third party), to rehabilitate students and assist them in determining their educational inclinations, as well as selecting appropriate specializations for them that are equivalent to their capabilities.

According to the Chairman of the Board of Directors, the bank will cover all tuition fees for the duration of their studies, and the term of the agreement will be an academic year to be renewed every year until the next five years, as the cost of the first year is 13,500,000 riyals, and approximately 150 students from various regions of the Kingdom will benefit from it, who will study in the best universities eligibility.

Al Rajhi Bank was keen for the program to be implemented using the most recent methodological methods in vocational guidance in the project's implementation. That way the bank can ensure that the maximum benefit is achieved for our students by passing through four main stations that ensure the selection of students for the specialization appropriate to his abilities and then follow-up throughout the study period until his graduation.

The largest and first of its kind in the Kingdom, the initiative to educate orphans is an extension of Al Rajhi Bank's community contributions under the slogan "Right and Duty," and as part of the long-term support programs for educational programs, as Al Rajhi Bank previously supported the medical tower located within King Saud University's endowments with 70 million riyals. In addition to many Community Education programs, the bank donated a 20 million riyal tower to the endowments of King Fahd University of Petroleum and Minerals.