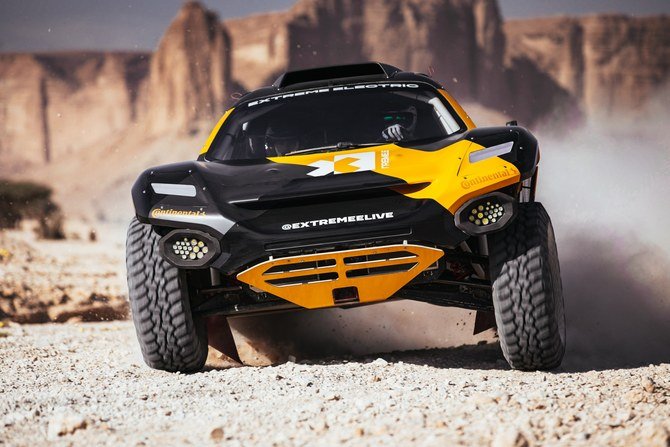 Al-Ula has achieved remarkable success after hosting the first race of the Extreme E series of electric SUVs, organized by the Ministry of Sport in cooperation with the Saudi Automobile and Motorcycle Federation. The race is part of the initiatives of the Quality of Life program, one of the objectives of the Kingdom's Vision 2030 within the framework of unlimited support for the sports sector receives from His Royal Highness Prince Mohammed bin Salman bin Abdulaziz, Crown Prince, Deputy Prime Minister and Minister of Defense.

Despite the Coronavirus pandemic, the Kingdom of Saudi Arabia addressed these challenges and, at the beginning of the year 2021, hosted the largest rally in the world, the Dakar Rally over a period of 13 days, with the participation of 342 competitors from 68 countries, who passed more than 9 Saudi cities.

32 days after the end of Dakar Rally, Diriyah hosted the Formula E for the third time in the Kingdom, with the participation of 24 competitors representing 12 international teams, in the second round of the seventh season of Formula E races. The first supporter of the sports sector and the nation's youth, His Royal Highness Prince Mohammed bin Salman bin Abdulaziz, Crown Prince, Deputy Prime Minister and Minister of Defense attended the end of the race, confirming his keenness and interest to develop sport in our dear country, to become a big name globally in hosting all kinds of sport events.

The 18th of last March also witnessed the announcement of the track of the largest Formula 1 race, which will be hosted by Jeddah in December 2021. A few days ago, and specifically last Sunday, the third world race hosted by the Kingdom during three months in the year 2021, Extreme E came to an concluded, with the participation of 9 teams and 18 drivers.

The main goal of establishing the Extreme E racing series is to select sites that have been affected by climate change and handling it, to reach a pure environment and clean energy, in line with the Kingdom's vision 2030, and to make the Kingdom a leading country in alternative energy, preserving the environment for future generations and looking towards the future. This coincides with the announcement of HRH the Crown Prince of the "Saudi Green" and "Middle East Green" initiatives, which aim to reduce carbon emissions from oil use by 60%, plant 50 billion trees, combat pollution and land degradation, and preserve marine life.

The tournament witnessed a massive media presence that reached 90 media outlets, as the Extreme E media center hosted more than 38 media professionals from within the Kingdom and from different countries of the world, representing 7 different nationalities that included Italy, Germany, the United States, Sweden, Britain, France, Egypt, and Chad, while the event was broadcasted by 90 media outlets from 180 different countries around the world. The German team Rosberg X Racing, made up of the Swedish Johan Kristoffersson and his Australian colleague Molly Taylor, won the race title and first place, while Andretti United team, represented by Swedish driver Timmy Hansen and Britain's Catie Munnings, came in second place, and X44 team, represented by from French rally champion Sébastien Loeb and Spanish driver Cristina Gutiérrez finished in third place.

Prince Abdulaziz bin Turki Al-Faisal, Minister of Sport and Chairman of the Saudi Arabian Olympic Committee congratulated the winners of the race and said: “I congratulate all the winners of this great and the first of its kind race, which was held in the historic Al-Ula, and I can only express my heartfelt thanks to the Custodian of the Two Holy Mosques King Salman bin Abdulaziz Al Saud, and His Royal Highness Crown Prince Mohammed bin Salman bin Abdulaziz, for the great support and attention they accord to the sports sector, which have resulted in hosting many international sporting events, despite the challenges that the world faces due to the Coronavirus pandemic. Extreme E Al-Ula race, was an opportunity for all of us to reflect on the importance of the impact of climate change, and what we can do to address this challenge, to reach a pure environment and clean energy in line with the Kingdom's Vision 2030 , and the ambitions of HRH the Crown Prince to make the Kingdom a pioneer in alternative energy, and preserving the environment for future generations.

For his part, Prince Khalid bin Sultan Al-Abdullah Al-Faisal, Chairman of the Board of Directors of the Saudi Automobile and Motorcycle Federation, said: “We enjoyed a wonderful race in the picturesque desert of Al-Ula, and we are proud of the Kingdom’s opening of the first race of the new Extreme E Championship, which is in line with the Kingdom's Vision 2030, which confirms our country's interest in sustainability, this race will remain in the memory of motorsport fans in the Kingdom and all over the world, and we look forward to continuing to host major global events this year in various fields, specifically in motorsports.

Founder and CEO of Extreme E, Alejandro Agag, expressed his happiness at the success of the race and said, “There is no doubt that the event was absolutely wonderful. We have worked for this moment for two and a half years to create the Extreme E series, and today's results were amazing and better than I expected. Al-Ula track is very wonderful, and it is ideal for cars, and all drivers and praised it. Personally, I admire HRH the Crown Prince and the Kingdom's Vision 2030, and I admire the Kingdom and its people very much, we always find welcome everywhere, so we are happy here to work with the Minister of Sport and the Chairman of the Board of Directors of the Saudi Automobile and Motorcycle Federation, from whom we found all the care, support and follow-up for the success of this event."