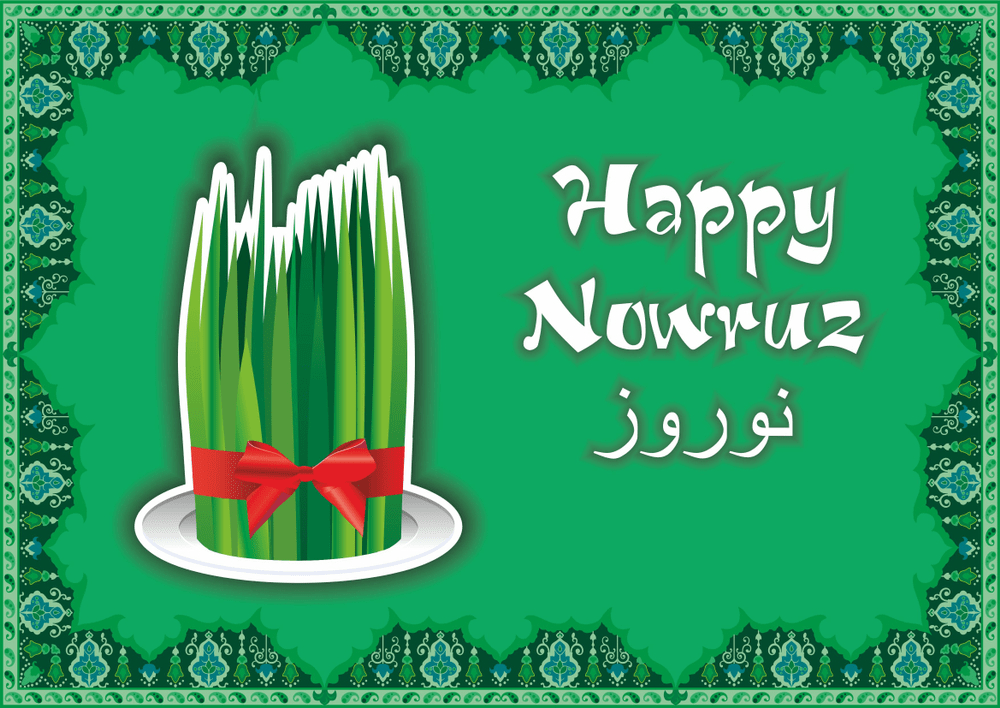 Nowruz.. A time for revitalization and hope for better days!

The first year of the Iranian calendar starts with the year the Prophet Mohammad migrated from Mecca to Medina.  The first day though, coincides with the first day of spring, celebrated by Iranians as “Nowruz” or New Day.

Iranians celebrate Nowruz with traditional festivals, and it has been a national holiday since the rule of Cyrus the Great (538 BC). Historically, the celebration was to mark the victory of the Zoroastrian God, Ahura Mazda over the evil spirit, Ahriman.

Nowruz celebrations include many customs, including spring cleaning, buying new garments and household items, visiting family members and neighbors, as well as setting up a table called “Haftsin” or the table with seven items beginning with the letter ‘S’ in Farsi.

It also includes a goldfish, a mirror, the holy book, painted eggs, and candles.

This year, Iranians are bearing the brunt of a collapsed economy, some paying for bread in installments and standing in long lines for basic food items. However, they will still arrange their Haftsins in hope of a bright future.

The holiday custom of spring cleaning usually starts a few days before the New Year.

Iranians hope to “spring clean” their country this year by getting rid of the corrupt regime, a clerical rule that has lasted 42 long years.

Iran has historically been invaded and occupied in the past 3,000 years by different ethnicities and cultures, but still, the Nowruz celebrations never faded, and the tradition lived on.

Another Nowruz custom is the fire festival. The fire festival or ‘Chaharshanbeh Suri’ is held on the last Tuesday of the year, when Iranians jump over small bonfires. The symbolic gesture is meant to purify against evil and misery.

Due to the explosive state of the society, the clerical regime fears the traditional fire festival will get out of hand and discourages the celebration. Many are arrested for selling or buying firecrackers. In 2019, Tehran’s Chief of Police announced 280 arrests of “troublemakers” and threatened the public against actions that he deemed as “destructive” in the festival.

The first five days of the New Year are considered official holidays. This is when Iranians visit friends and family members by reinstating friendly relations and letting go of past grudges. Iranians welcome their guests and serve them with a variety of traditional Persian sweets, a mixture of nuts and fruit.

However, ordinary Iranians have lost most of their purchasing power this year and many say they cannot provide the traditional snacks for Nowruz. They are angry at the damaged economy and systematic corruption of the regime. Due to the high inflation rate in Iran’s crumbling economy, the prices of basic foods have increased and Iranians have to spend up to 40% or more on goods.

After the anti-Shah revolution in 1979, Rohullah Khomeini, the founder of the Islamic Republic came to power. Khomeini and his clerical rule discouraged Nowruz celebrations, saying it was affiliated with Zoroastrianism, and that it was pagan and anti-Islamic.

However, knowing how much most Iranians loved the traditional Nowruz celebrations and rituals, they feared opposition and did not officially prohibit it. Instead, the clerics try to diminish it by encouraging Islamic holidays.

After 42 years of theocratic rule, the regime has brought about nothing but misery, poverty, corruption, and death. Over 60 million Iranians live under the poverty line, which accounts for 70% of the population. Many Iranians have not tasted meat and fruit for months and have not been able to make ends meet.

Workers across the country have not received their wages for months, and there are protests held in several cities by teachers, nurses, and pensioners on a weekly basis.

The COVID-19 pandemic aggravated Iran’s economic problems. In addition to the battle with the deadly virus, many workers have lost their jobs, or have not received wages for many months.

While regime elites thrive in their luxurious lives, the result of corruption and embezzlement, Iranians can barely afford food for Nowruz.

Still, Iranians are determined to celebrate Nowruz and replace the current sorrow and oppression with happiness and hope.

*Cyrus Yaqubi is a Research Analyst and Iranian Foreign Affairs Commentator investigating the social economy of the Middle East countries that are relying on the oil revenue and comparing their progress to their ruling system, specially covering a variety of topics about Iran.