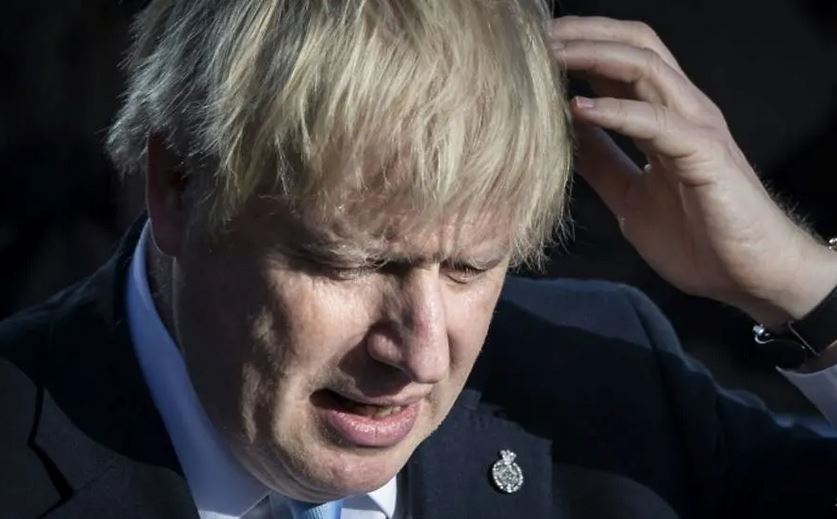 Johnson in election mode as he visits Scotland after Brexit setbacks

Prime Minister Boris Johnson heads to Scotland on Friday (Sep 6) in campaign mode despite failing to call an early election after MPs this week thwarted his hardline Brexit strategy.

Johnson, who will make a fresh attempt next week to force the mid-October snap election, is set to visit a fish market and announce a post-Brexit funding boost for Scottish farmers during a visit to Aberdeenshire, his office said.

He will then stay at Queen Elizabeth II's Balmoral estate and dine with her, an annual weekend-long tradition for prime ministers but one that Johnson has been forced to cut short to a single night due to the political turmoil in Westminster.

Opposition lawmakers and rebels in his ruling Conservative party on Wednesday left Johnson's plans for a no-deal Brexit next month in tatters and then blocked a request for a snap election on Oct 15.

Under British law, the government requires two-thirds of MPs to support holding such a poll.

The main opposition Labour Party abstained on the proposal, saying parliament must first approve its legislation to prevent Britain leaving the European Union without an agreement on Oct 31.

The government has said it will make a second attempt to force it through next week.

"What I want to do now is to give the country a choice," Johnson said Thursday during a campaign-style visit to northern England, where he greeted voters and delivered a speech.

His trip to Scotland, where voters backed remaining in the EU in the 2016 referendum and the Tories face a struggle to hold 13 parliamentary seats there in any upcoming election, appears part of a strategy to pressure Labour to cave into his demand. 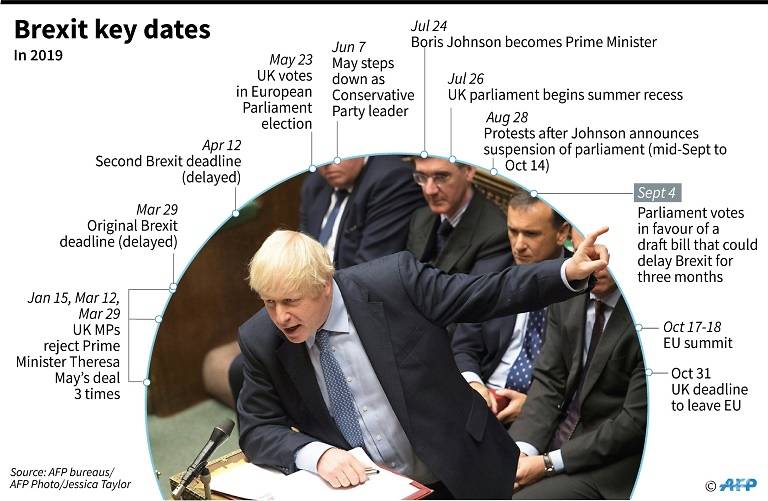 Timeline of main developments in Brexit so far in 2019. AFP/Gal ROMA

"DEAD IN A DITCH"

The House of Lords on Friday is set to approve the legislation, which compels Johnson to seek a three-month extension from Brussels if he cannot agree a divorce deal at an EU summit on October 17 to 18.

It is then expected to become law on Monday.

Johnson said Thursday he would "rather be dead in a ditch" than delay Brexit and is pushing for the election in the hope of winning a fresh mandate for his approach.

Lawmakers rushed the bill through parliament ahead of a five-week shutdown the prime minister controversially ordered last month which was widely seen as a pre-emptive attempt to prevent such legislation.

The decision to suspend parliament provoked uproar from Johnson's critics, who called it a "constitutional outrage", and several legal challenges.

Three High Court judges are expected to rule Friday on its legality after Gina Miller, a businesswoman and leading anti-Brexit campaigner, applied for a judicial review.

A judge in Scotland ruled in favour of Johnson on Wednesday in a separate challenge.

Brexit was originally scheduled for Mar 29 but was postponed amid political gridlock over the terms of the country's divorce from the bloc after almost half a century of deepening ties.

Johnson, who took power in July, argues that his threat to leave with or without a deal will force EU leaders to agree better terms.

Opponents say the prime minister is playing with fire amid predictions of the economic damage such a disorderly breakup could cause.

However, Johnson has been left in limbo with his parliamentary majority destroyed by a Conservative rebellion which saw 21 people - nearly all former ministers - suspended from the party.

He was dealt a further personal blow Thursday when his brother Jo said he was quitting his junior ministerial role and would not contest his seat in parliament again.

"I've been torn between family loyalty and the national interest - it's an unresolvable tension & time for others to take on my roles," Jo Johnson tweeted.

Amid the unfolding political drama the British pound rose during the day, hitting a one-month peak against the dollar, with currency traders seeing reduced prospects of a "no deal" Brexit.