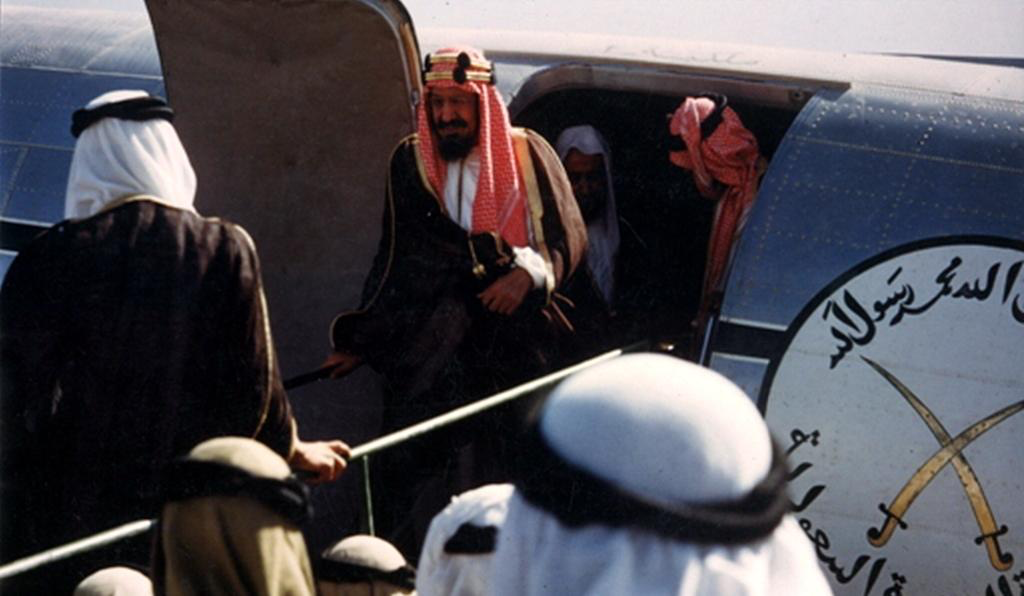 75 years of the civil aviation journey... Ambitious achievements and an effective contribution toward the Gross National Product

The year 1945 witnessed the landing of a civilian "Dakota DC3" aircraft in Jeddah, and that plane was a gift from US President Roosevelt to King Abdulaziz Al Saud - may God have mercy on his soul - following the historic meeting that brought them together on board the American cruiser (USS Quincy), in the Great Bitter Lakes north of the city of Suez. The great founder of the Kingdom of Saudi Arabia, then gave the private plane gifted to him by the American President to the people of the Kingdom. Thereafter, began domestic flights between Riyadh, Jeddah and Dhahran, and a few months after the arrival of that first plane, King Abdulaziz ordered the purchase of two planes of the same type, and the three aircraft formed  the first nucleus of civil aviation in the Kingdom. The founding father - may God have mercy on him - contributed thereafter to laying the foundation of the civil aviation industry. His majesty realized from an early age the importance of the aviation industry as an essential and necessary element for the renaissance of this country of more than two million square kilometers, which requires fast and modern means of transportation linking the various parts of the country.  There was a need to connect the different part of the country to each other, and to the outside world. Hence, a department has been established in the name of the (Aviation Division) that supervises technical affairs, while administrative affairs were handled by a department named (Airline Aircraft Management). In 1946 the first civil aviation regulations were issued (airport fees tariffing system, landing system, aircraft overflying, The erection of airports and air navigational system). In 1948 (Civil Aviation Authority) was born to include both the Department of Civil Aviation and Saudi Arabian Airlines, and in 1953 a comprehensive civil aviation system was established in accordance with internationally established rules and regulations. Thereafter, 1959, corresponding to 1379 of the Hijri calendar, Saudi Arabian Airlines was separated from Civil aviation, the later was later named (Directorate of Civil Aviation), and in 1977, corresponding to 1397 of the Hijri calendar, the name (Directorate of Civil Aviation) was changed once more to the (Presidency of Civil Aviation). Thereafter, a Cabinet Resolution No. (13) was issued on the seventeenth of Muharram in the year  (1425 H), corresponding to the year 2004, the Presidency of Civil Aviation turned into a public authority with financial and administrative independence to operate according to commercial principles and standards. The aim was to liberalize and develop the Kingdom's aviation sector, and achieve financial self-sufficiency, by relying on its own returns. It later become known by its new name (the General Authority of Civil Aviation).

Thereafter in 1432 H (2011 AD), a Royal Decree No. A / 230 dated 9/12/1432 H was issued to separate the General Authority of Civil Aviation (GACA)from the Ministry of Defense and its structure was redesigned to give it more independence and to enable it to develop the air transport industry in the Kingdom.

The government of the Custodian of the Two Holy Mosques, King Salman bin Abdulaziz Al Saud continued its unlimited support for civil aviation and its development, and on 7/30/1437H, (2016), a Royal Decree No. A / 133 was issued in which in its Article No. (23)  linked GACA to the Minister of Transport. In  8/9/1437H, corresponding to 6/13/2016, the Cabinet of Ministers approved arrangements  activating the role of the General Authority of Civil Aviation as an independent legislative body by completely separating its responsibilities from the board of directors of Saudi Arabian Airlines. On the other hand, and on 11/4/1438H, a Royal Decree No. 17049 was issued to separate the legislative side from the operational at GACA, in order to enable it to deepen its role as a legislator and organizer of the air transport industry in the Kingdom, and then stand on the same distant of all operators in this vital sector.

Civil aviation in the Kingdom has achieved ambitious achievements in various sectors, according to what has been stated by specialized international organizations, including the International Air Transport Association (IATA), which confirmed the contribution of the civil aviation sector in the Kingdom by 5.6% to the gross national product, the contribution valued at $36.5 billion in 2018 compared to 34 billion dollars in 2014. The sector provides and supports about 594 thousand jobs in 2018. It broke the barrier of 100 million passengers, an increase of 22%, and the number of flights increased to about 771 thousand, an increase of 20% over 2015. It is worth mentioning, that the kingdom occupied second place in the Arab world in the amount of revenues generated by the Civil Aviation Sector.

At the airport level, this industry, which is one of the greatest tributaries of the economy around the world. The Kingdom’s aviation sector has a direct impact on the gross domestic product. Furthermore, GACA has provided modern and smart technologies in the Kingdom's airports, which today amounted to (28) airports. These factors play a pivotal role in the air transport industry and improve the travelers service experience, while the numbers of recipients of electronic tourist visa is expected to increase.

On the international front, the Kingdom won an ICAO Council elections that are held every 3 years, and GACA has hosted and organized the International Civil Aviation Conference in 2019, which was held under the auspices of the Custodian of the Two Holy Mosques in the capital city of Riyadh. Furthermore, GACA has concluded (122) bilateral agreements for air transport services with a number of countries.  GACA have also concluded and updated (31) bilateral memoranda of understanding with a number of countries.

In terms of servicing the pilgrims, GACA has set itself the goal of attracting 30 million pilgrims as one of the goals of the Kingdom's 2030 vision. On the ground. there are many success stories, the most prominent of which is the number of pilgrims in the arrival and departure stages at Jeddah and Madinah airports, which exceeded (3.4) million pilgrims in 2019, with an increase over 2015 of 27.24%. Furthermore, the launch of “EYAB” initiative in both Jeddah and Madinah airports, which aims to end the check-in procedures for pilgrims in an easy and automated manner from their residence and before arriving at the airport.

It is worth noting, that the achievements are continuing under the wise leadership, which supports this and other developmental sectors in the Kingdom of Saudi Arabia. A wise vision that worked to lay the foundations for a sound infrastructure and appropriate systems and investments to provide innovative products and a distinct customer experience.  All of which has contributed together in building a prominent global center for aviation. The General Authority of Civil Aviation continues to achieve this vision by maintaining the pace of growth in the aviation sector in conjunction with following the highest standards approved in the field of safety and security. Furthermore, by continuing to activate innovation that is a founding value inherent in a solid air transport industry and a key catalyst for the development of this vital sector around the world.