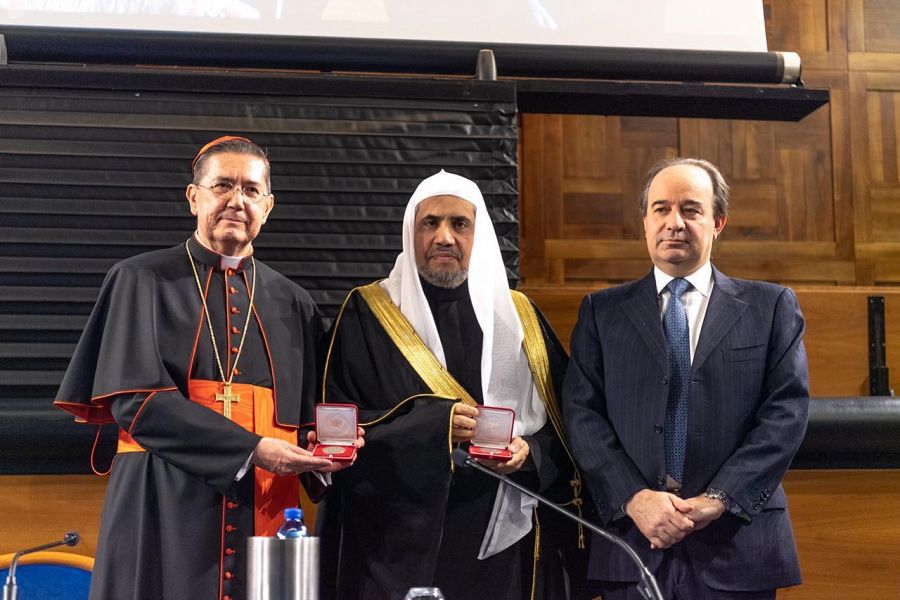 Dr. Al-Issa delivers a lecture at Italy’s Catholic University on friendship and cooperation among nations

Upon an invitation of the Italian Catholic University, Secretary General of the Muslim World League (MWL) and Chairman of the Council of Senior Scholars, Sheikh Dr. Muhammad bin Abdul Karim Al-Issa, has recently delivered a lecture on friendship and brotherhood among nations and peoples. He reviewed models representing the positive relationship between the Islamic world and the Christian one. This relationship has recently been promoted through the strong relationships between the Muslim World League and the Vatican.

Dr. Al-Issa said that brotherhood and friendship means love, sincere conscience and mutual trust, consequently the easiness of dialogue and understanding together with working on common denominators among us. He made clear that the friendship is the most important issue we can talk about, whereas it means the effective friendship. He added that the modern and civilized ideas positively interact with the concept of a single human family, the understanding among followers of religions and cultures, and mutual respect among them. This leads to the dialogue, understanding and alliance of civilizations for the peace, harmony and service of humanity. He stressed that it is natural to be religiously, politically, intellectually and culturally different. Yet, it is unacceptable to make this difference a mean to abandon and leave each other. We should work on the common denominators, only 10% of which can spread peace and harmony in our world.

Dr. Al-Issa unveiled that the MWL is currently preparing an international initiative themed “Promoting friendship and cooperation among nations and peoples…. for more understanding and peaceful world and more harmonious and integrated societies”. He continued to say that the problem of the human family is not in the formality of friendship, it lies in the inability to find a supreme value of friendship. The biggest problem is the rejection of this friendship due to the political, religious, intellectual or racial reservations that equal an extremism threatening the friendship, peace and harmony of our world. 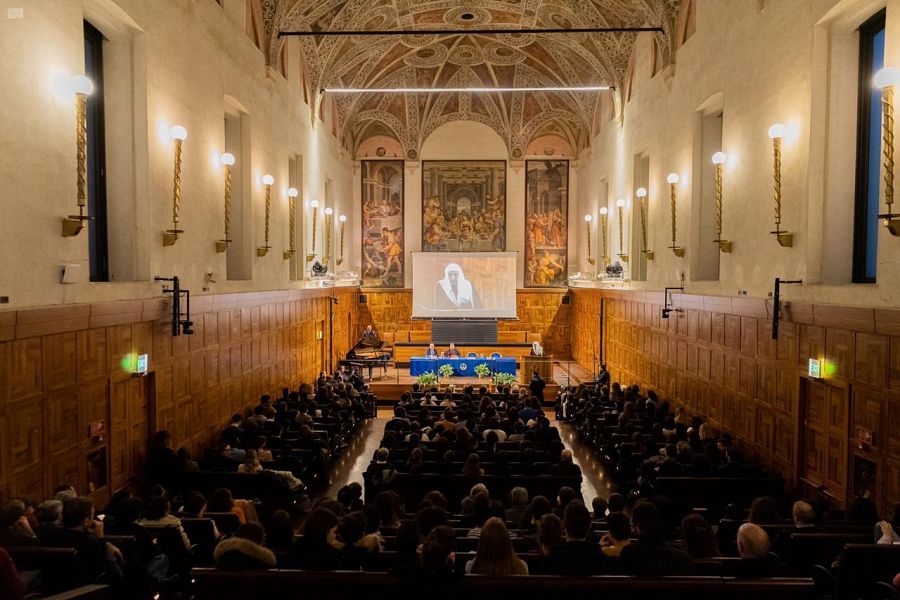 Dr. Al-Issa pointed out that the good people in our world proved that they are the ones who can find the true meaning of friendship. They are also the role model for others regarding the human values. They can also make peace and harmony among nations and peoples. The true friendship and active contributions in the service of humanity are the criteria of values, whereas the value of man is represented in his services provided to others. Allah’s Messenger Mohamed (PBUH) said: “The most beloved people to Allah are those who are most beneficial.”

Dr. Al-Issa stressed that we all have a shared responsibility to preserve the human values of the coming generations that promote their peace, harmony and mutual respect among them together with raising awareness of the inevitability of the difference and diversity. In addition, the coming generations should be taught the appropriate manner to communicate with others and how to deal with bad people. Dr. Al-Essa said that a great responsibility lies on the religious platforms, education and the family that should undertake their moral duty. The moderate and temperate religious discourse aims to contribute to the promotion of human behavior.

Dr. Al-Issa said: “From my relationship with all religions, I realize that there is gap in the way of addressing youth who should be brought up on supreme values and high morals. He asserted that the negative conducts related to the deterioration of values and morals are the responsibility of all. He said that the isolation of religions in the homes of worship away from fulfilling their moral and humanitarian responsibilities turns them into a mere decor and undermines others’ trust in them. Religions should take the lead pertaining to the preservation of human values, peace and harmony among all.

Dr. Al-Issa continues to say that the abstract respect is the portal of peace and harmony among all forms of human difference and diversity. The respect paves the way for dialogue and understanding that should be objective. The question raised here: Were religious and cultural debates throughout human history free of the choice of dialogue? In fact, the option of dialogue was present in many cases, but it was not influential enough to make success. Why? 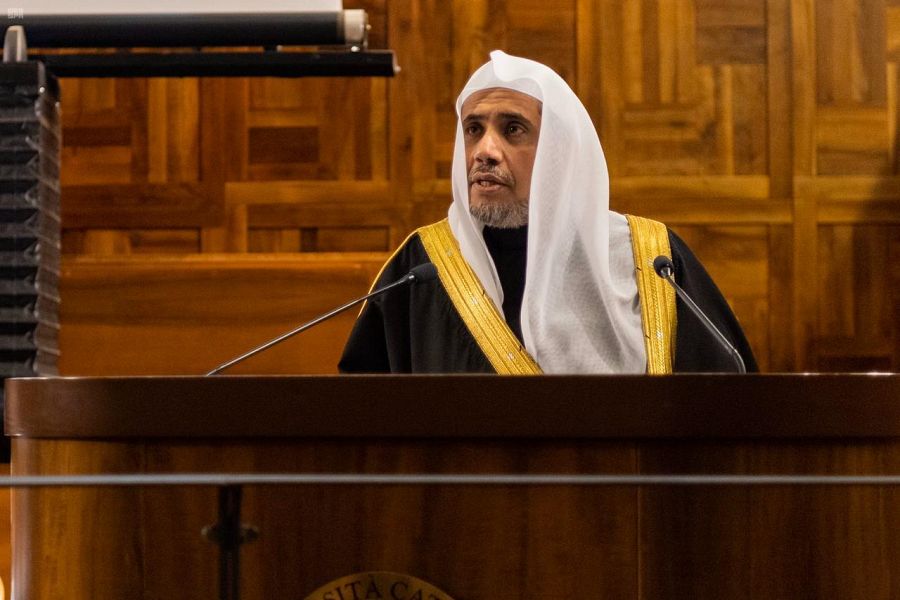 The reasons may be:

- Is there an inevitable clash of civilizations as some people believe? Consequently, there is no point in dialogue, whatever we do to render it successful

- Or the wrong format of dialogue, especially with regard to mutual trust or good management of the dialogue?

- Or the people are intolerant in the area of tolerance preferred

- Or the dialogue is not preceded by a preamble i.e. there is no “launch platform”

- Or the dialogue is preceded by an attempt to impose satisfaction because each interlocutor believes that he own the absolute truth. Therefore, there is no space for understanding

- Or the dialogue does not set the common denominators among people

Dr. Al-Issa added that when Allah the Almighty created human beings, he made them need each other whatever they were different and the clash became an evil for them all. If some of those people claim victorious, this victory is temporary, delusional, and not a real one. While convictions cannot be imposed, it is not possible to allow, in return, to offend public conscience and tranquility together with contempting others’ convictions. In short, the real triumphant in the objective dialogue among the followers of religions and cultures is the values. What are the values we mean? Or what are the values that we want? These values, in short, are the human denominators. We should apply these values on a common ground based on many issues including:

First: the efficiency of education, which includes the good curricula and the teacher. Education should focus on behavioral and moral knowledge in addition to sciences. The knowledge, we want, includes formulating civilized behavior for children and juniors through reviewing human knowledge of a common moral nature and enriching their thought to be able to persuade them by clarifying the positive models for adoption, and the negative models resulting from their rejection. Furthermore, children and juniors should be convinced of the importance of moral value in their personal lives. This leads to the peace and harmony of their societies. They also should be persuaded that the human deserves this quality by acquiring these qualities. The first and last loser in risking the values is the person himself. Values and communication skills should be instilled in children and youth who should learn how to think and conclude properly.

The second: from among pillars of applying common values is the efficiency of family leadership. The family should acquire enough awareness and form its children’s minds through the positive behavioral knowledge. What are matters that take place to this human? He is influenced by the acquired negative behavior, whatever the reasons for it. Dr. Al-Issa said: “I should indicate that the religious discourse should be moderate and temperate away from extremism and ways of imposing hegemony on others by force.

Dr. Al-Issa pointed out that it is important to highlight the strong relationship between the Islamic world and the Christian one. Pope Francis had fair stances with Islam and Muslims who appreciate these statements and his friendship with the Muslim world. He also said: “We have held a historic conference in Makkah in which more than 1200 muftis and scholars from all Islamic sects gathered. They met under the umbrella of the MWL at the Great Mosque of Makkah. Some of them expressed their appreciation for the Pope's remarks about Islam and Muslims, especially in the wake of terrorist acts committed by criminals who are falsely belonging to Islam.” 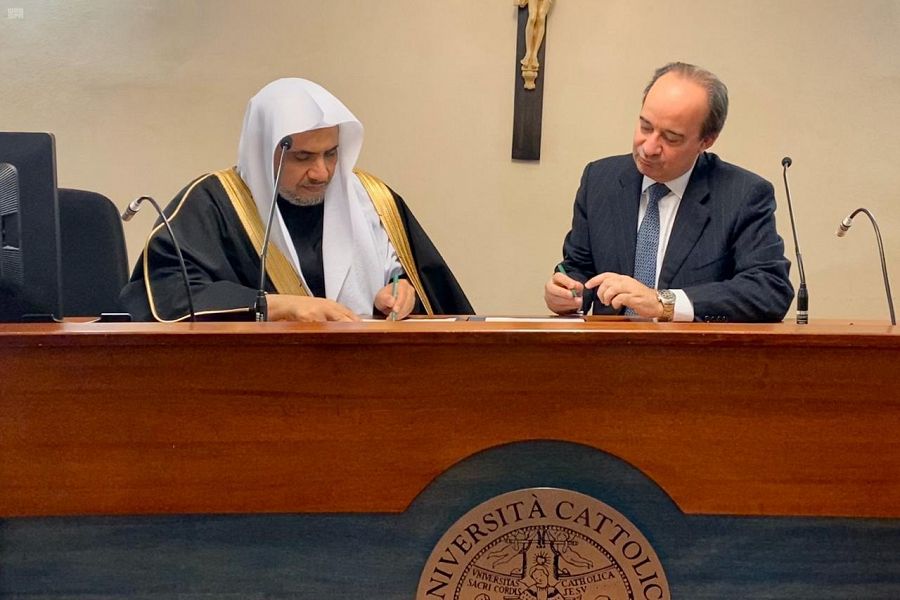 At the end of his lecture, Dr. Al-Issa mentioned many models that reflect the supreme values between the Islamic world and the Christian one. I, in the name of all Muslims under the umbrella of the MWL based in Makkah, met with Pope Francis. We discussed many issues in the atmosphere of mutual appreciation and looked forward to promoting friendship and cooperation.

Dr. Al-Issa recalled his friendship with late Cardinal Jean-Louis Touran who paid a historical visit to Kingdom with members of the Pontifical Council for Interreligious Dialogue in 2018. They met Custodian of the Two Holy Mosques, King Salman bin Abdulaziz Al Saud. They also signed a memo of cooperation between the MWL and the Pontifical Council for Interreligious Dialogue. When this memo is signed in the Kingdom Of Saudi Arabia and with the MWL that represents Islamic peoples, this means a lot to Muslims and non-Muslims.

Dr. Al-Issa expressed his appreciation to his friendship with Cardinal Mikhail Ayusu, current president of the Pontifical Council for Interreligious Dialogue who paid an official visit to the Kingdom of Saudi Arabia where he met with Custodian of the Two Holy Mosques, King Salman bin Abdulaziz Al Saud within the framework of the visit of Cardinal Jean-Louis Touran.

On the other hand, Dr. Al-Issa and president of the Catholic University, Mr. Franco Anelli signed an agreement of cooperation and partnership between the university and the MWL with the aim of developing and improving Arabic language programs and Arab and Islamic cultural research activities.

The paramount importance of the agreement comes in the light of studies, research papers, programs and training initiatives conducted by the Catholic University in the sphere of Arabic language and culture. The MWL is keen to support, promote and improve all efforts exerted by the international academic institutions in the field of Arabic and Islamic language and culture.

Both sides, through this partnership, seek to reinforce research actions in these fields through initiatives backing tracks about the Arabic language and culture together with conducting  theoretical and applied research projects presented to the University's Arabic Language Research Center and a special focus on projects related to teaching Arabic to non-native speakers. Furthermore, the agreement approved the establishment of fellowships to grant PhDs in the field of Arabic language and culture.