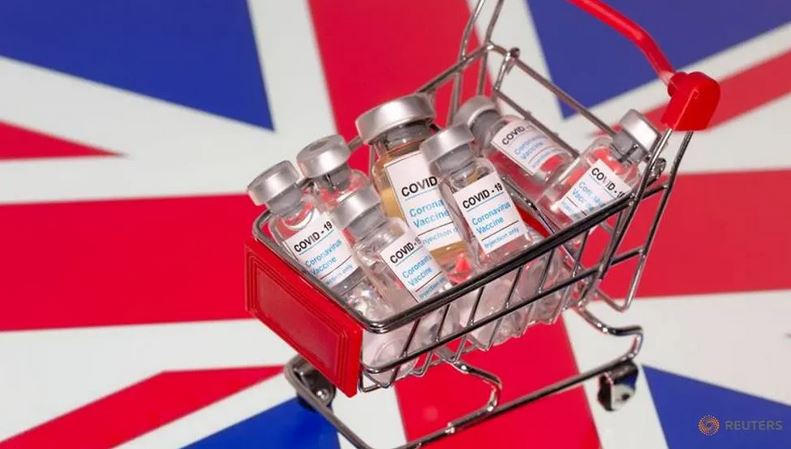 UK approves Pfizer-BioNTech vaccine for use, first in the world

Britain on Wednesday (Dec 2) became the first western country in the world to approve a COVID-19 vaccine, jumping ahead of the United States and Europe after its regulator cleared a shot developed by Pfizer and BioNTech for emergency use in record time.

The vaccine will be rolled out from early next week in a major coup for Prime Minister Boris Johnson's government, which has faced criticism over its handling of the coronavirus crisis with Britain enduring the worst official COVID-19 death toll in Europe.

A vaccine is seen as the best chance for the world to get back to some semblance of normality amid a global pandemic that has killed nearly 1.5 million people and upended the global economy.

"The government has today accepted the recommendation from the independent Medicines and Healthcare products Regulatory Agency (MHRA) to approve Pfizer-BioNTech’s COVID-19 vaccine for use," the government said.

Britain touted the approval as a global win and a ray of good hope amid the gloom as big powers race to approve an array of vaccines and inoculate their citizens.

"I'm obviously absolutely thrilled with the news, very proud that the UK is the first place in the world to have a clinically authorised vaccine," British Health Secretary Matt Hancock said.

He added that the UK expects to have "millions of doses" by the end of the year.

China has already given emergency approval for three experimental vaccines and has inoculated around 1 million people since July. Russia has been vaccinating frontline workers after approving its Sputnik V shot in August before it had completed late-stage testing on safety and efficacy.

Pfizer and its German partner BioNTech have said their vaccine is 95 per cent effective in preventing illness, much higher than expected.

Pfizer said Britain's emergency use authorisation marks a historic moment in the fight against COVID-19.

"This authorisation is a goal we have been working toward since we first declared that science will win, and we applaud the MHRA for their ability to conduct a careful assessment and take timely action to help protect the people of the UK,” said CEO Albert Bourla.

"As we anticipate further authorisations and approvals, we are focused on moving with the same level of urgency to safely supply a high-quality vaccine around the world."

Britain's medicines regulator approved the vaccine in record time. Its US counterpart is set to meet on Dec 10 to discuss whether to recommend emergency use authorisation of the Pfizer/BioNTech vaccine and the European Medicines Agency said it could give emergency approval for the shot by Dec 29.

"The data submitted to regulatory agencies around the world are the result of a scientifically rigorous and highly ethical research and development programme," said Ugur Sahin, chief executive and co-founder of BioNTech.

Britain's vaccine committee will decide which priority groups will get the jab first: Care home residents, health and care staff, the elderly and people who are clinically extremely vulnerable will be first in line.

Britain has established three routes to get the vaccine out to the country, a programme it has described as "challenging" because it needs to be shipped and stored at minus 70 degrees Celsius or below.

Hancock said 50 hospitals have been set up across England and are waiting to accept the vaccine.

Large vaccination centres are also being set up now, and in time local health centres known as general practitioners and pharmacists will provide the jab in the community if they have those capabilities.

The community element is likely to take on a larger role if a rival vaccine from Oxford University and AstraZeneca is approved, because it does not need such cold storage and is easier to deliver, Hancock added.

Pfizer has said its vaccine can be stored for up to five days at standard refrigerator temperatures, or for up to 15 days in a thermal shipping box.

Johnson said last month that Britain had ordered 40 million doses of the Pfizer vaccine - enough for just under a third of the population as two shots of the jab are needed per person to gain immunity.

Other frontrunners in the vaccine race include US biotech firm Moderna, which has said its shot is 94 per cent successful in late-stage clinical trials. Moderna and Pfizer have developed their shots using new messenger RNA (mRNA) technology.