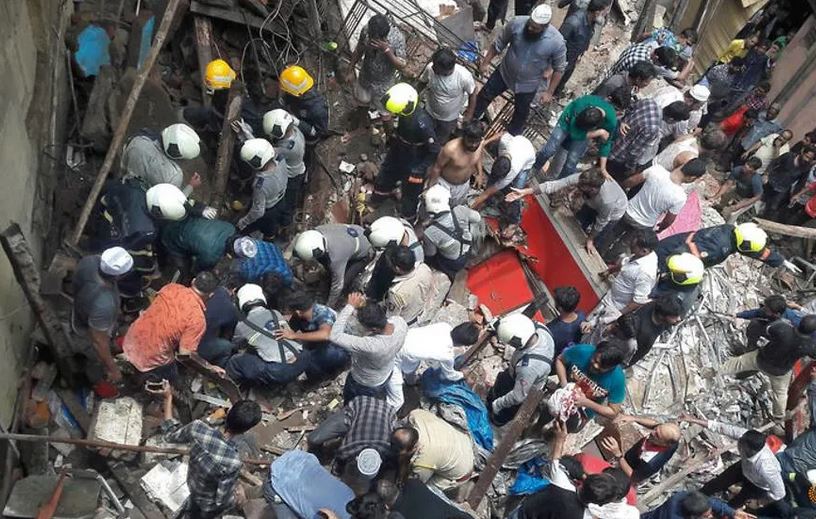 Rescue workers and residents search for survivors at the site of a collapsed building in Mumbai, India on Jul 16, 2019. (Photo: REUTERS/Stringer)
MUMBAI - CNA

At least four people have died and dozens more trapped after a four-storey building in the Dongri area of Mumbai collapsed on Tuesday (Jul 16) morning.

Firefighters and rescue workers are at Tandel Street in Dongri after the Kesarbai building gave way around 11.40am local time, officials said.

"There are people trapped under the debris. Search and rescue operations are in progress," said PS Rahangdale, chief fire officer in Mumbai. "Adjacent buildings are in (a) very dangerous condition and are vacated."

A fire department official confirmed at least four people have died, and that rescue operations are being hampered by narrow lanes in the area.

Three teams from the National Disaster Response Force are currently at the scene and carrying out rescue operations to search for survivors.

The Brihanmumbai Municipal Corporation (BMC), the municipal government in Mumbai, asked people to work with authorities.

"In an extremely unfortunate incident, the Kesarbai (building) in Dongri collapsed at 11.40 am. According to preliminary information, 40 to 50 people are most likely trapped in the debris," it wrote in a tweet.

"Three teams of NDRF, fire brigade, our disaster management team as well as all senior officials of MCGM (Municipal Corporation of Greater Mumbai) are on the site. Rescue work is in progress and we request citizens to cooperate with the authorities."

Mumbai Police also tweeted: "Humble request to citizens to stay away from the incident spot to facilitate effective rescue operations by authorities. A green corridor has been provided for all emergency services and rescue operations."

It was the second such collapse around Mumbai in the last 10 days.

At least 12 people were killed when a house collapsed in northern India following heavy monsoon rain which has left more than 85 dead across South Asia, officials said on Monday.

This is a developing story. Please refresh for updates.